With the change of seasons, self-confessed “Raspberry Pi nerd” Kevin McAleer figured his beloved pups could do with some eye-catching outerwear to ensure they’d be seen during their evening walk. After a quick consultation with his chihuahua, Archie, about his modelling fees, Kevin set about designing the NeoPixel-encrusted Cyberdog Smart Saddle, an RGB LED coat that Kevin would be able to control from his phone.

Kevin McAleer’s work may be familiar: he hosts a popular Sunday YouTube robot design channel. Among other intriguing makes, we’ve recently featured both Kevin’s Billy Bass remotely flappable fish and his PIKON DIY camera. While both those projects upcycle existing hardware, the idea behind the delightful doggie Day-Glo jacket was “to create something fun from some foot-long LED NeoPixel strips.” Kevin realised that he could control these from a couple of feet away using a Pimoroni Plasma 2040 microcontroller. 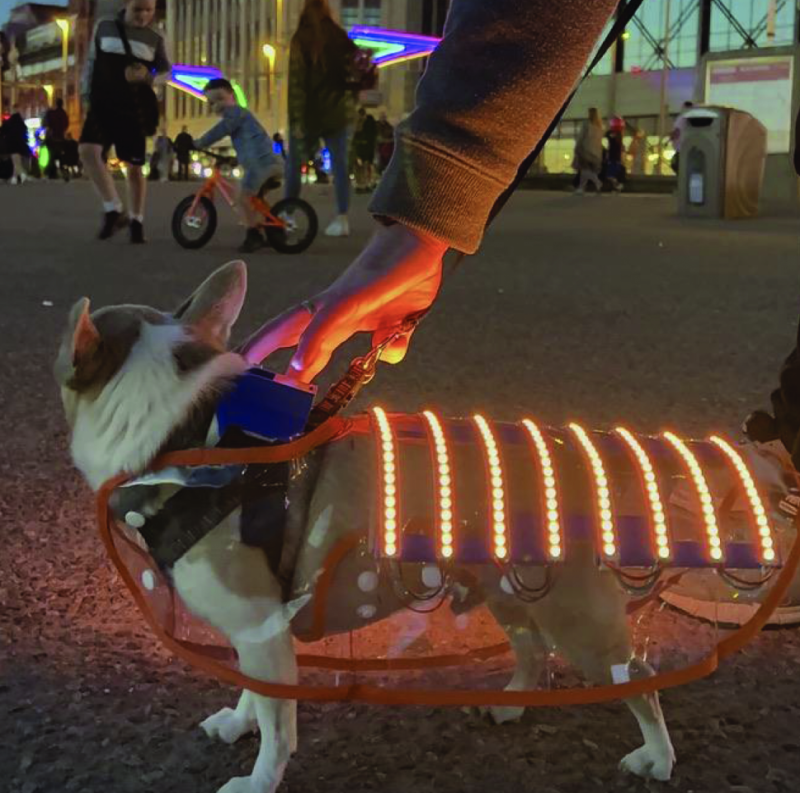 The Plasma 2040 also has a very important current-limiting function that ensures Archie doesn’t end up toasted, should the lights short out and draw a lot of current very quickly. However, the Plasma lacks both Bluetooth and wireless connectivity. This is where Raspberry Pi Pico W comes in. With the low cost of Pico Ws, Kevin thought, “well, why not just add one to the project and have it act as a bridge and front-end to the project? It can handle all the wireless stuff, whereas the Plasma 2040 can do what it’s best at – making LEDs light up.” 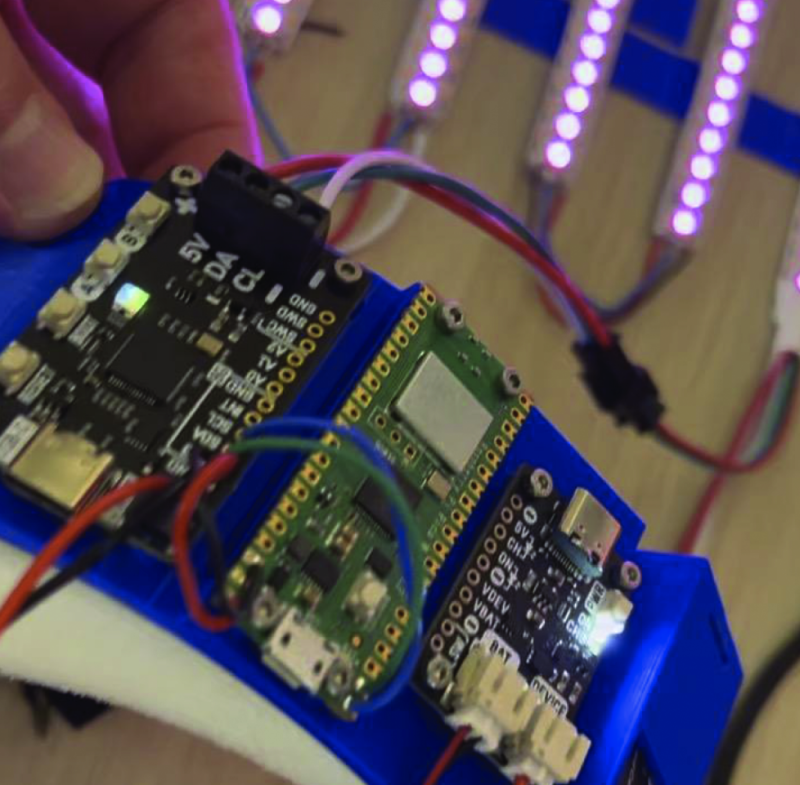 Kevin also had a cunning plan for powering everything: he’d run it all off a tiny LiPo battery, secreted in a self-contained harness that can comfortably sit on Archie’s back. Fingers crossed, the battery would last long enough for a stroll along Blackpool promenade, the home of illuminations and the perfect place to show off such a marvellously attired pup.

Designing the 3D-printed saddle was probably the biggest challenge, since it had to comfortably fit Archie while also holding all the electronics. “Will it fit right? Can it safely hold all the components? Will it be light enough?” were Kevin’s chief concerns here. He also worried whether the attention-grabbing effect would last long enough for a reasonable length stroll, and didn’t want Archie to have to style out a wardrobe malfunction. Adding a pocket to the saddle design to allow for speedy battery changes helped allay this fear, while applying lashings of superglue helped adhere the rainbow LED strips to the plastic dog coat. 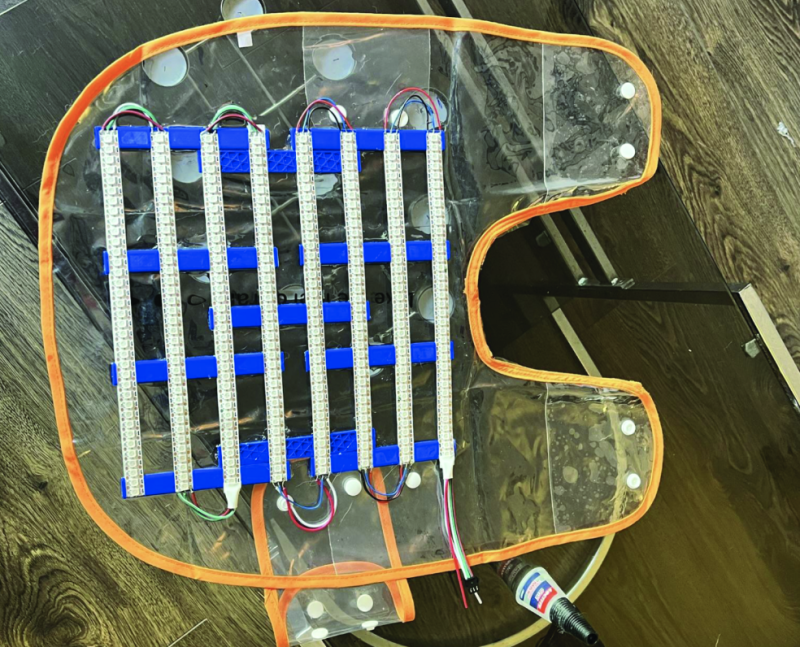 Given his choice of microcontrollers, this is a MicroPython-based project, which suited Kevin very well. “I love MicroPython,” he declares. “All the code [for the project] is written in this for simplicity and speed of creation. It’s as close to English as any language I’m aware of; good code reads like regular sentences.”

Kevin credits the “amazing” Phew! code from Pimoroni for the easy setup of wireless access point and web interface. Phew! (Pico HTTP Endpoint Wrangler) “does a couple of cool things,” Kevin explains. “It can make the Pico W into an access point for a device, meaning it will appear on your phone as a wireless hotspot.” 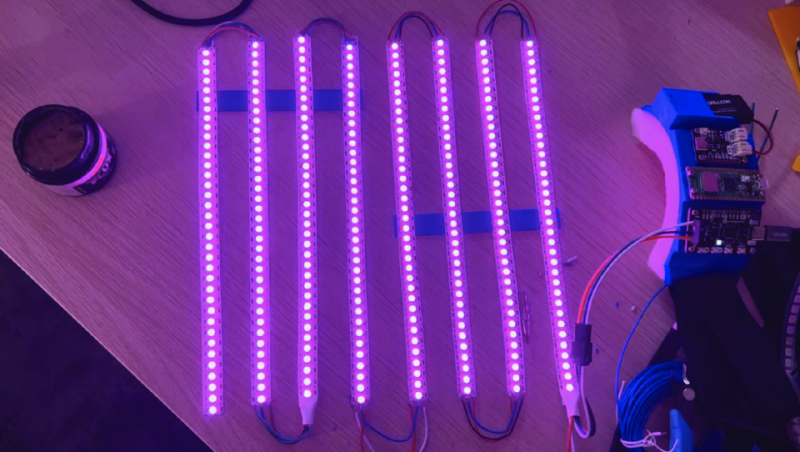 “I’m not aware of any project that has influenced this,” says Kevin. “It’s just a crazy idea I saw through to completion!” We think it’s doggone good! 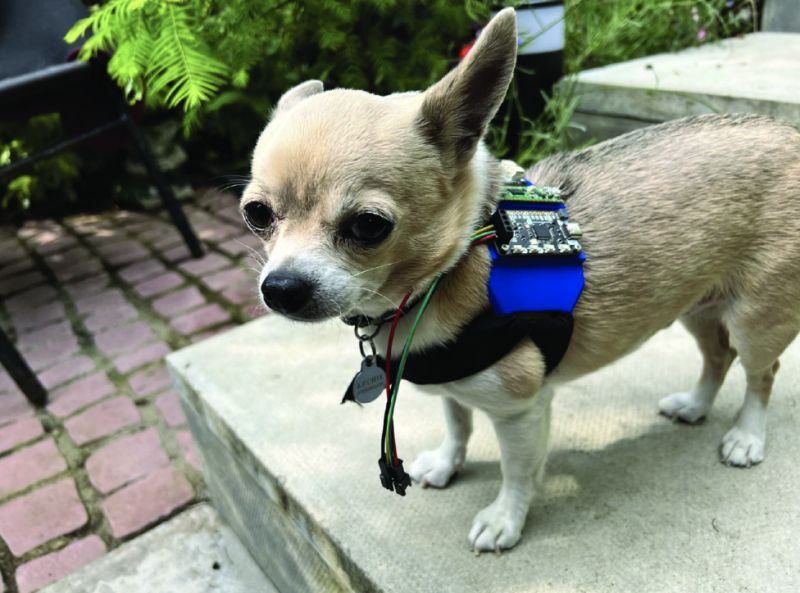