Stuart Brand was between jobs and decided to concentrate on pushing his skills by building Raspberry Pi projects: “I headed to the garage and embraced my inner nerd!” exclaims the maker of the ZX Spectrum Raspberry Pi Cassette. “I wouldn’t have had a clue how to build any of this stuff before lockdown. It goes to prove that you never know what you’re capable of until you give it a go.”

Stuart’s first computer, a ZX Spectrum, has a special place in his heart, so a Raspberry Pi project based around one seemed ideal. “They’re still great machines!” he says of the beloved computer which celebrates its 40th birthday this April.

Stuart loves repairing and running real hardware as well as emulations and thought “it would be nifty to see if I could fit an entire ZX Spectrum emulator into a cassette tape shell.” He now uses his ZX Spectrum Pi Cassette as a ‘pick up and play’ device whenever he fancies “a quick bash at some old school gaming.” 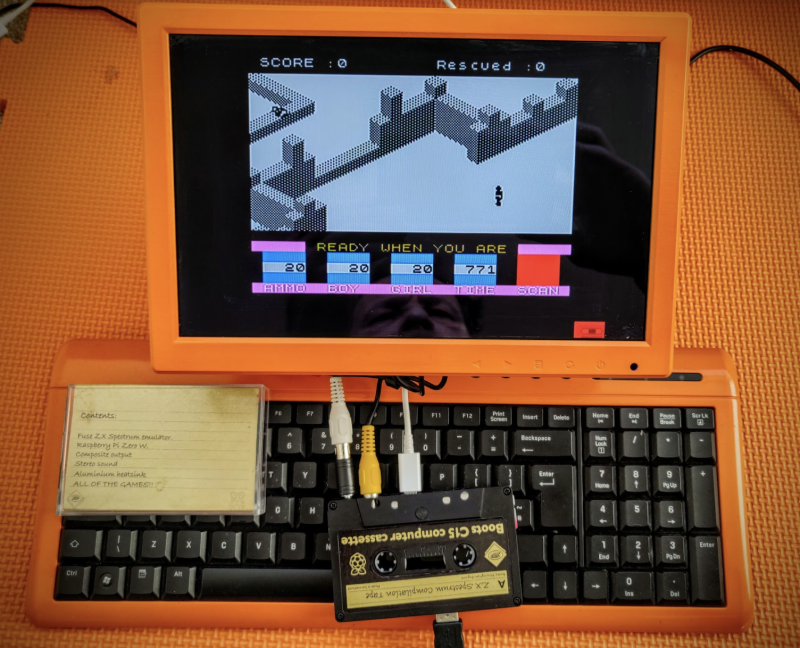 Learn as you go

Prior to this project, Stuart had several retro makes under his belt and had made a tape emulator for an Arduino-based ZX Spectrum +2 that acts like a multi-cart tape. “Putting a whole Spectrum in a tape shell was the next logical step and an interesting challenge,” he says. Being tight for space, he chose Raspberry Pi Zero W. He loves the fact both ZX Spectrum and Raspberry Pi’s ARM processor were developed in Cambridge.

Despite this, he describes himself as a haphazard tinkerer with little electronics experience, who plans everything in his head. “I don’t have any schematics to share,” he apologises, “and never measure anything.” However, he makes paper mock-ups of everything he’s planning, largely to ensure it all fits. A veteran of small case builds, Stuart cautions other wannabe makers to leave far more room for cables than you think you’ll need. He also admits to treating his Raspberry Pi collection rather roughly: “even though they have been abused and tortured, they still keep running.” 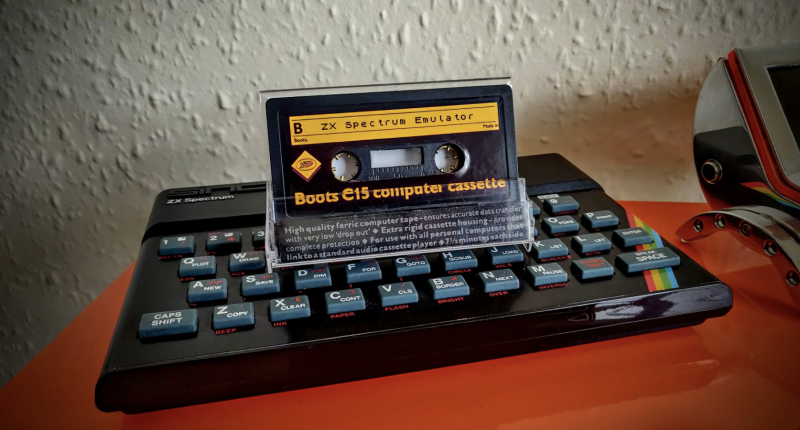 Stuart assembled the ZX Spectrum Raspberry Pi build from what he had to hand. He took a sheet of scrap metal and used a bandsaw to fashion a crude shape for what would act as Raspberry Pi Zero W’s heatsink. A Dremel, needle files, and fine-grit sandpaper were used to finesse the shape.

Stuart bought a job lot of cassette tape seconds: “Boots C15 were the cassettes I used for storing my programs back in the ’80s; it was an obvious choice” – for which he designed and printed new labels. 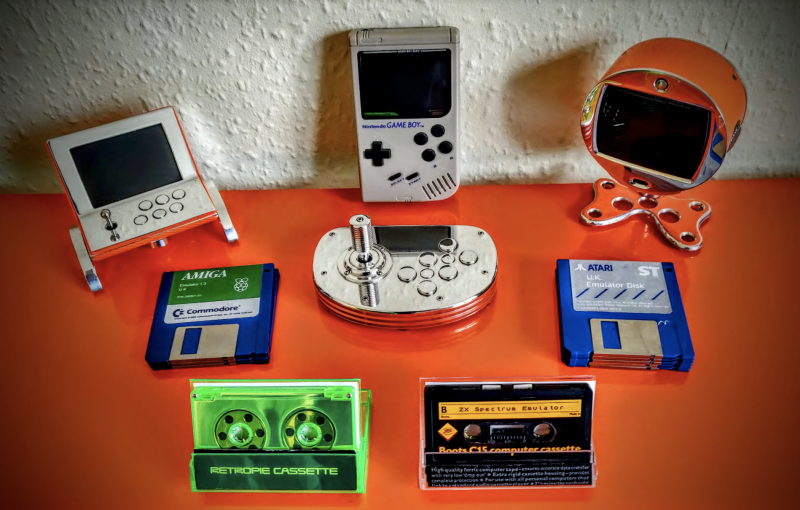 “Cassette shells make for a great form factor,” says Stuart, “I started with a plain black spare cassette shell and used a small hand file and side cutters to remove the plastic supports in preparation for fitting the heatsink.”

The 5 mm interior of the C15 cassette tape meant something would have to give: fitting a Zero W inside involved cutting out a section to nestle under the reels and “preserve the illusion” – not something inexperienced makers are advised to tackle. Stuart has eight similar builds under his belt, hence his confidence. He wrapped Raspberry Pi in foil and “went at it with a Dremel.” Surprisingly, it survived. “I lost some GPIO ports, but it was well worth it to get the tape looking right.” 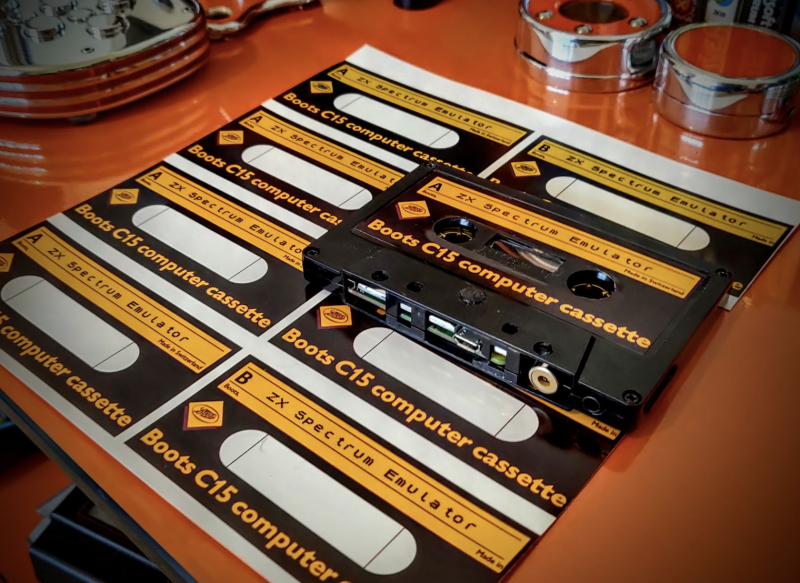 Configuring the DietPi and Fuze ZX Spectrum emulator took lots of tweaks before Stuart was able to get them to boot in an acceptable time frame. “I eventually got it to boot in 16 seconds. The full-width heatsink meant I could safely overclock Zero W and saved another couple of seconds,” he says.

His next challenge: a 1980s boom box with drop-in cassettes that boot up and play games from different iconic home computers. We like his thinking! 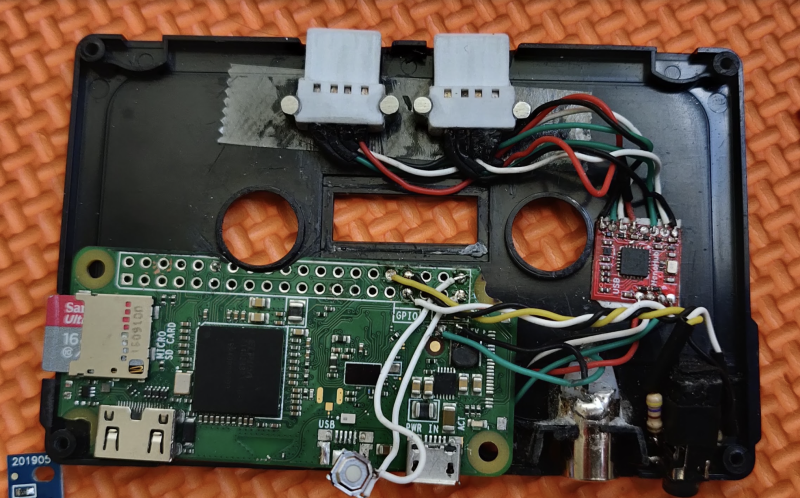