Although our city streets are packed with CCTV cameras, past reports have suggested that many are either in the wrong place or simply don’t work. Perhaps the Watchdog Security Robot is the answer.

“Someone can throw their hoodie on and hide from a high-mounted camera,” argues Josh Starnes. “People are less likely to misbehave when someone is physically there to witness it.”

So what is the answer? A lack of resources means flooding the streets with police isn’t always economically viable. “But would you be surprised if a robot rolled up, recording or talking to you while you are up to no good?” asks Josh. “I would.” Which is why he has created a security robot to do exactly that, called Watchdog. 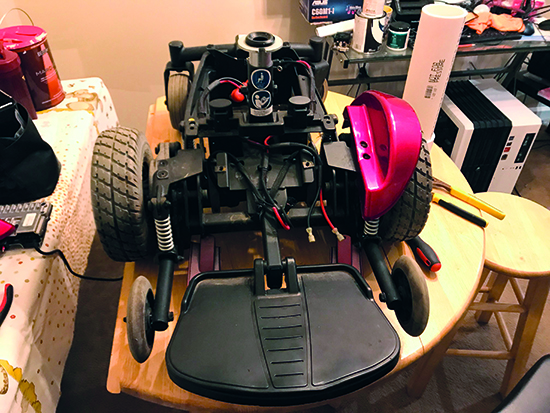 Inspired by sci-fi movies such as Short Circuit, Evolver, and Star Wars, Josh got to work on an affordable DIY robot that can trundle around the streets, operate in cold and wet weather, work well in low light, and communicate. He wanted it to record HD video locally and stream via WiFi to a secondary source for online viewing. “I decided to use a Raspberry Pi. It has an excellent community and it’s moved past being a new gadget to a useful tool.”

At first, Josh spent time getting the chassis right, using the base of a Jazzy Select power chair. He stripped away unwanted parts such as the chair, footrest, original Jazzy electronics, and the front anti-tip wheels. He also bought a Sabertooth dual 12 A motor driver which is optimised for use in medium-powered robots and radio-controlled vehicles.

Struggling to find an off-the-shelf camera that met all his needs, he turned to the Pi 3: “It meant I could pick the camera module I needed, record to a hard drive, and have remote access.” Josh used four Pi 3 boards, each connected to a camera. “In the event one fails, all the others are independent and would continue recording.” 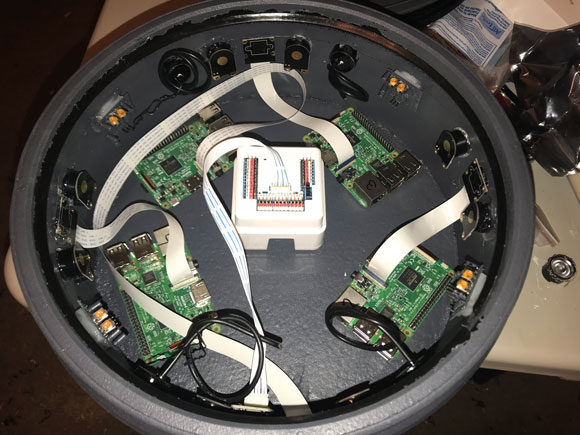 See in the dark with Pi NoIR Infrared Camera

The project uses the Pi NoIR Camera Module, which has a 5MP sensor, night vision, and a 130° adjustable-focus lens. Four of these are mounted inside the robot’s head – the upper half of a five-gallon bucket with a screw-on lid and a treated plywood bottom. Motion and ultrasonic sensors are also mounted within the head. These enable the robot to detect obstacles and movement.
Easy does it

With the Raspberry Pi handling the video recording and managing the broadcast, Josh was able to produce a robot that could scan its environment, roll up to wrongdoers, and record. “I used EZ-Robot’s EZ-Builder software. They have some wonderful tools that allow use of radar-style ultrasonic navigation, machine vision, and movement controls.” He found creating a movement routine to be straightforward: “EZ‑Builder has modules you can insert that write complicated scripts for you.”

This gave Josh more time to get the Raspberry Pi to record while broadcasting. After trying the motionEyeOS system but only achieving 10 frames per second, he turned to Python and wrote something himself. Meanwhile, he continued to work on the look of Watchdog, painting the robot a cool gunmetal grey. Today, while it’s still a work in progress, it’s almost ready for action.