Seeking to make a gift for the in-laws looking after the kids in Maine over the summer, Fin Hopkins decided to build a ‘Tide Clock Weather Thing’ to help predict the weather and tides for days out at the beach or kayaking. “I remember [the reaction from the recipients] was something like ‘wow, that’s beautiful! What is it?’ I had to point out what all the lights and dials were, since there aren’t any markings on the case,” recalls Fin.

How the tide clock weather project was built

The large wheel on the device shows the current weather conditions on top; as they change, it rotates planetary gears to bring a new icon to the top. In the middle of the wheel, a finger points to the current temperature, with the forecasted daily range lit by coloured LEDs. Five more LEDs below light up blue for impending rain, filling up to show when it’s 60, 45, 30, 15, or 5 minutes away.

24 LEDs at the bottom of the device represent each hour of the day, lighting up in different colours for forecast weather conditions – including blue for rain, yellow for sunny, dim white for cloudy, and green for windy. Just above this strip, a moving bar with two pointers shows when the two daily low tides will occur.

A chime is also sounded for low and high tides using a Speaker pHAT connected to a Pi Zero, which runs the Python software and controls the NeoPixel LEDs via a Trinket M0 microcontroller. All the weather data is sourced from the Dark Sky API, while tide data comes from the NOAA’s Tides and Currents site. 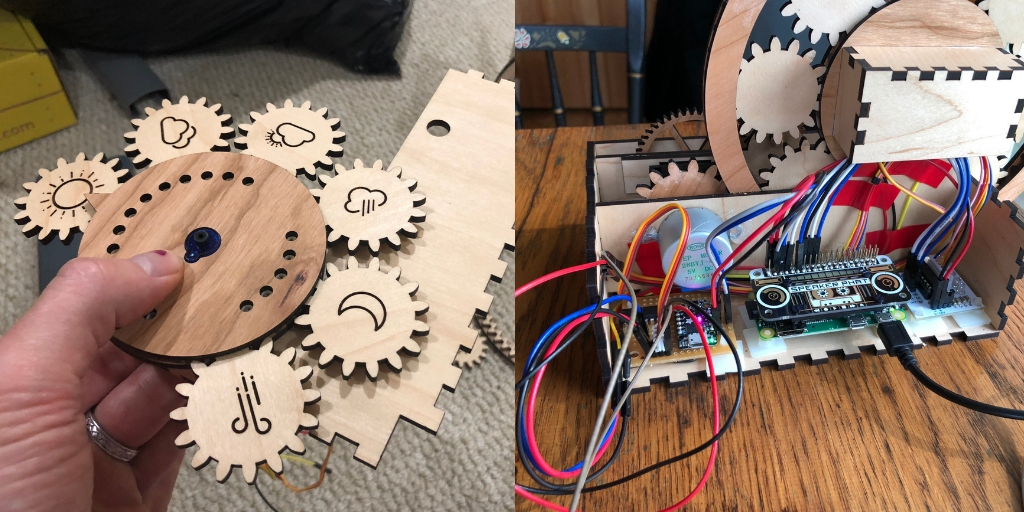 From the first gear prototypes to a working version of the device took Fin about three weeks, working nights and weekends. “We were going to visit my in-laws for the 4 July holiday, so it was a sprint to a tight deadline at the end. I got all the hardware and wiring done, and then ended up finishing the coding while I was up there.”

The design adapted and fell into place as Fin prototyped, starting with the laser-cut planetary gears – for the weather symbols – which rotate around a central hub. “Once I saw how neat the large version [of the wheel] looked, it was ‘OK, what else can I put with this?’” A lot of the changes made concerned reducing the scope. “I wanted to show high and low tides over two days, with each indicator separately controlled.

Once I got into ‘OK, now how would I build that?’ it became one day, then not separately controlled, then just low tides,” explains Fin. “Even after I simplified my goal for the tide indicator, it took a number of prototypes to get right.” Making their debut Raspberry Pi – and electronics – project was an educational process for Fin. “I learned how to solder, how to crimp wire, and I finally got my head around the difference between voltage and current. I learned about stepper motors, GPIO pins, I2C communication, PWM, and a ton of other topics.”

This project first appeared in The MagPi issue #76 and was written by Fin Hopkins.