We hack the Lego Boost kit some more, to gain extra control, and create some fun projects

Recently, we saw how to connect the Lego Boost robotics set to the Raspberry Pi, and how to communicate with it in Python. This time we look at three example projects, where we explore the finer points of control that are normally hidden from you by the standard Lego software.

This tutorial was written by Mike Cook and first appeared in The MagPi 81. Get a free Raspberry Pi computer & kit worth £20 with a 12-month print subscription to The MagPi.

The Lego Boost system communicates with a Move Hub that receives instructions, in real-time, over Bluetooth – it does not store its own set of instructions. So your model has to be in Bluetooth range all the time. This month we have three models to build, explore, and program. First, a simple but amusing use of the tilt sensor, then a machine to explore the performance of the colour sensor, and finally a colour sequence memory game. All parts for these projects can be built using the bricks that are included in the Lego Boost 17101 set.

We start with a very simple Lego build from the excellent book, The Lego Boost Idea Book, by Yoshihito Isogawa. It is a simple set of eyes that will always face to the front – well, in one dimension only. The idea is simple: measure the angle of the Hub and move the built-in motor to compensate for that movement. The Lego build is simple enough – see Figure 1. 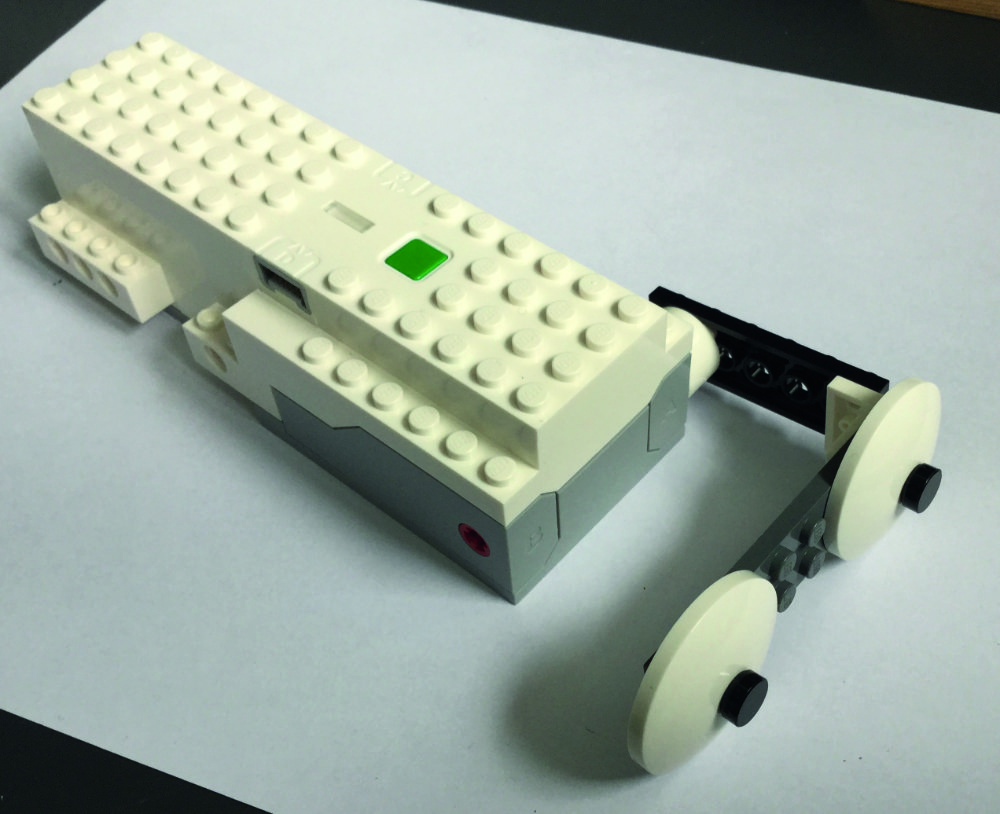 We also have full step-by-step pictorial build instructions on our GitHub repository. The code to drive it is simple, but not as simple as you might hope.

The Python code for driving this is shown in the Eyes_front.py listing, and the alternative Lego language code is shown in Figure 2.

It is interesting to note the difference in performance of the two code versions. The Lego language has a slow, hesitant movement, whereas the Python code has a much more robust feel about it. We did find that a straight translation from the graphics language into Python produced a system that would occasionally rotate outside the required parameters. This was caused by sending the motor commands too quickly – that is, before the previous one had finished. A small delay seemed to be the only cure.

Next up, we wanted to make a game using coloured tiles and the colour sensors, but we ran into difficulties getting all the colours recognised at a fixed distance. We thought it was a shame we did not have some sort of machine to test the colour sensor’s performance, but then we remembered that this was Lego and we could build one! So the next project turned out to be a colour/distance sensor test bed, which proved to be fun and very interesting. The Lego model for this is shown in Figure 3, and step-by-step build instructions and software are again available on our GitHub repo. 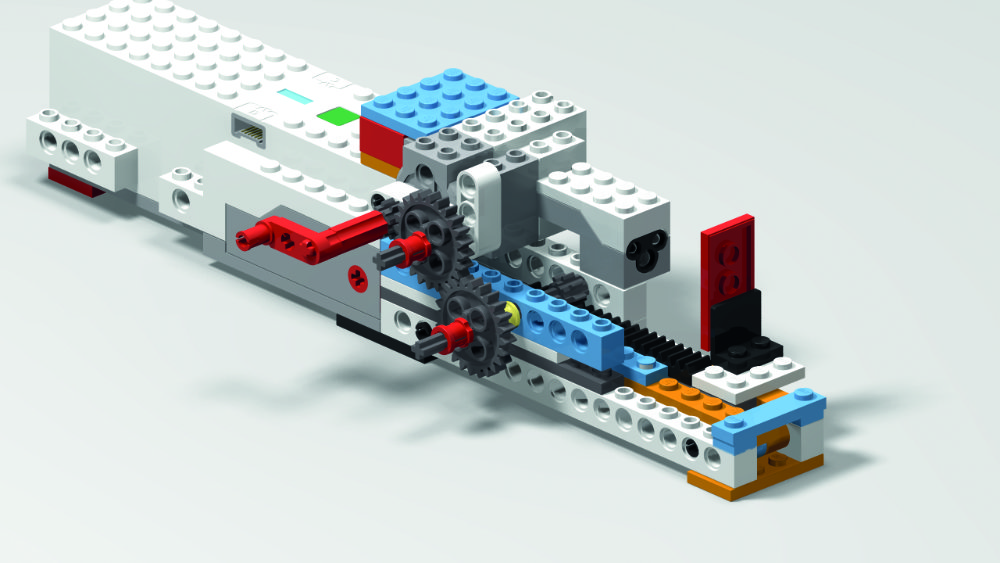 Each tile colour was tested, and the software produced a CSV file we could import into any spreadsheet software for analysis. There were a total of 149 readings for each tile, giving a grand total over the six colours of 894 readings – for each parameter, distance sensor, and colour number. The raw CSV files are again on our GitHub repo, but in summary it is fair to say that when the tile was at a range where the colour sensor worked, the distance sensor produced nonsense. The colour sensor’s performance is summarised in Figure 4; ‘not a colour’ is number 255 and is off the graph.

At close distances, the sensor would produce readings of black or no colour – 0 or 255 – then there would be a range where the reported colour was wrong, or would change from reading to reading. Then you got a period where the colour was consistent, before going into the oscillating values again, and finally ending up as no colour. The takeaway information from this was that all colours were correct from 6.17 to 16.18 mm. That is a mid-range of 10.01 mm, therefore the optimal range is 11.175 mm; unfortunately, this is a half stud quantity, making it difficult to achieve with Lego.

We know that ambient light will affect the colour sensor’s performance, so we set out to try to exclude as much of it as possible. The result is that we built a box around the sensor with a slot in the top where we could insert the appropriate 2×4 colour tile. This is shown in Figure 5 – again, full step-by-step instructions are on our GitHub repo. The only tile we had trouble with was the green one: it would not read when the smooth face was placed towards the sensor, but only the other way round. All the other tiles worked either way round. 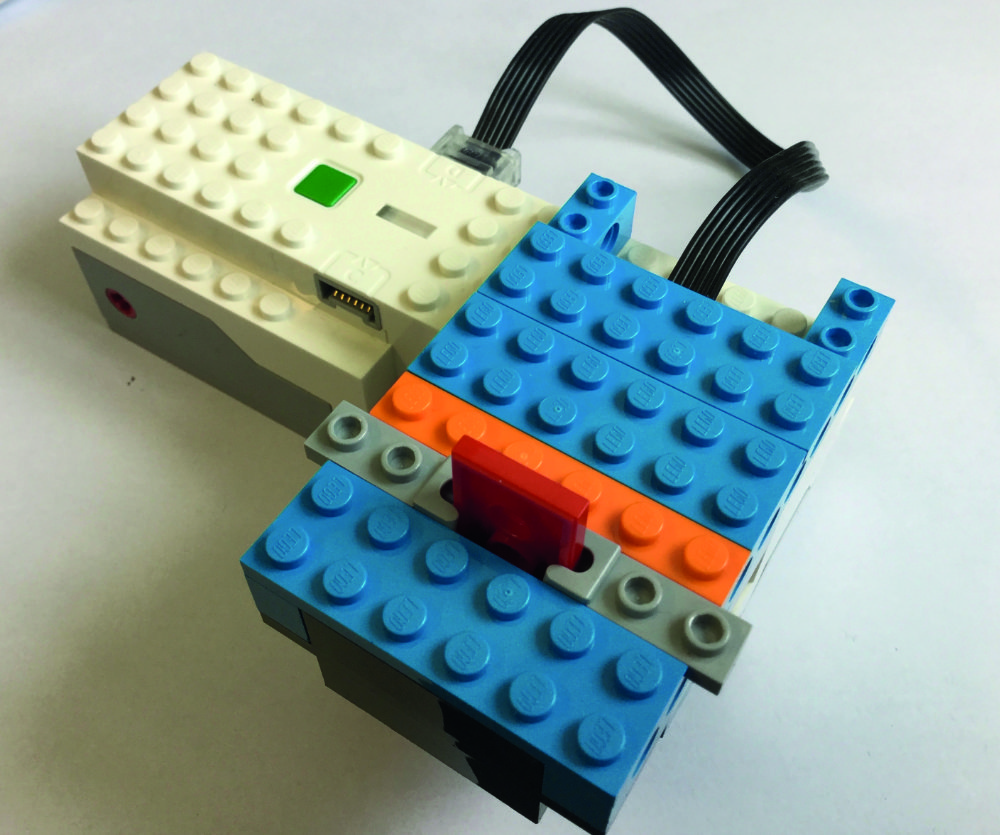 The software for the Memory game is shown in the colour_memory.py listing. The colours of the current sequence are called out using the speech synthesizer eSpeak; if you don’t have this installed, then a simple: sudo apt install python3-espeak From a Terminal window will install it. The sequence is also displayed on the Hub’s LED. Each time you get a sequence correct, an extra colour is added onto the end and getting a sequence wrong for three consecutive times results in that round being over. You can quit at any time using the Hub’s green button. The fact you have physical colour tiles makes the initial stages simple, as you can simply put them in the correct order.

You can change the number of times you get to complete a sequence by changing the maxFails variable. Sometimes we think that three attempts is a bit much when the sequence gets long. Of course, you can simply write down the sequence, but that defeats the object of the game. The maxLength variable determines how long a sequence to generate before the program decides you are cheating and shuts down. You can comment out or simply turn off the audio if you want the sequence to be delivered in the form of the LED colour only. You could replace the synthesizer sounds with samples, for better quality.

The step-by-step instructions on our GitHub repo are generated by a free software application called Studio 2.0. This is a 3D CAD system that can be used to build a virtual Lego model, view it from all angles, and produce staggeringly realistic photographic-quality rendered images of your model. Figure 6 is the rendered version of the photograph we have in Figure 5. The application is written by BrickLink, and you can take your model and generate an order for exactly the bricks you want to generate the real thing, but this can be expensive. 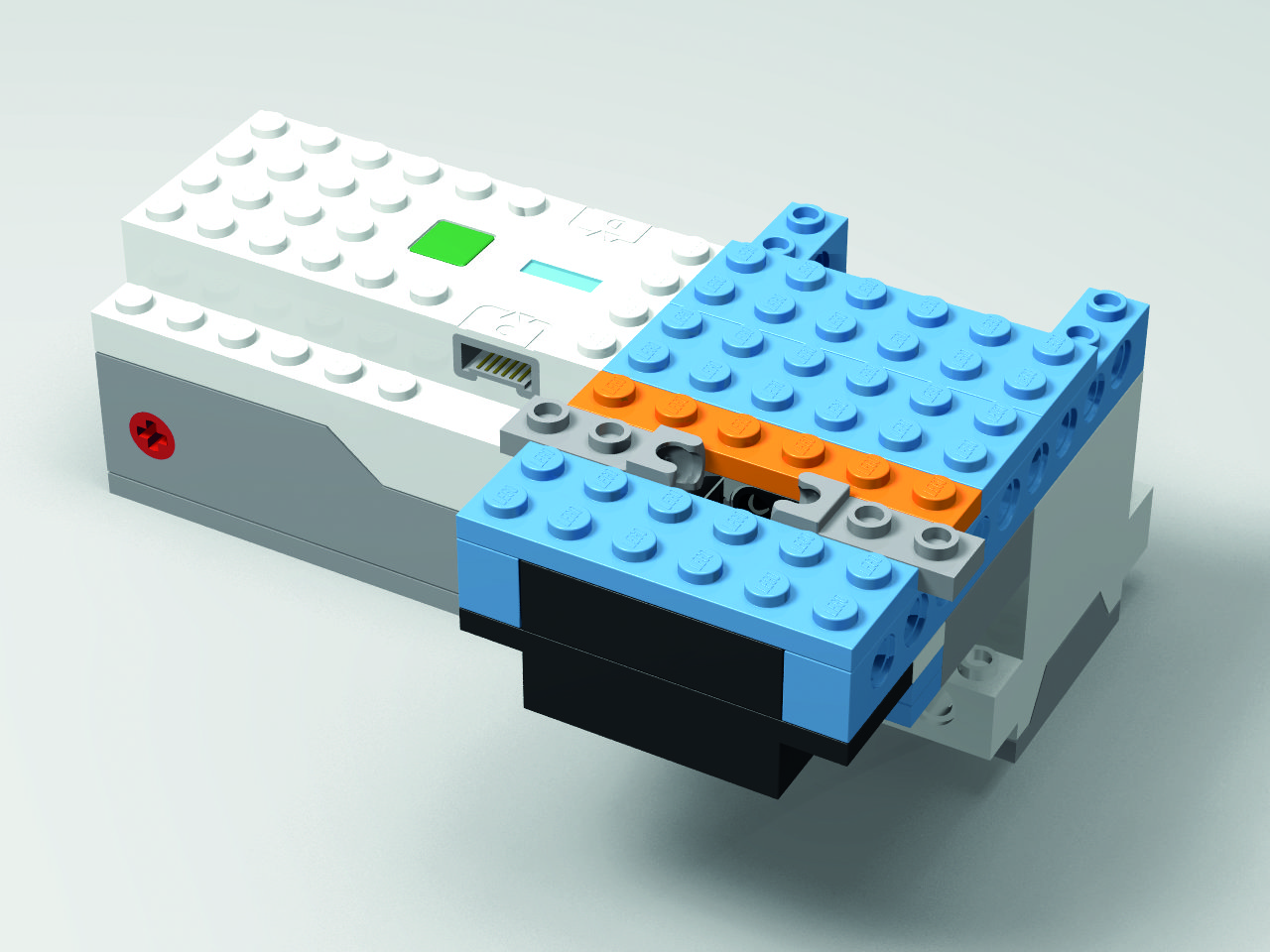 Unfortunately, Studio 2.0 is not available for Linux, so you can’t run it on the Raspberry Pi, but there are Windows and macOS versions. It is actively being supported, unlike the older official Lego tool LDD (Lego Digital Designer) which seems to have been neglected recently – these older models can be imported into Studio 2.0. There are still some things that Studio 2.0 will not currently cope with, like flexible linkages, but no doubt they will appear in due course. See our GitHub repo for notes on setting up Studio 2.0 to get the missing Boost-specific parts like the Move Hub.

In the final part of this series, we will explore some of the things you can do to make music using the Lego Boost system.