A rare fusion of handicraft and the Raspberry Pi has been displayed in the world-famous V&A Museum, alongside works by Raphael.

Wandering through London’s V&A Museum in December, you had a chance to see works from two major cultural movements: the Renaissance, and the maker movement. On the wall were paintings from 1515, designs by Raphael for his celebrated tapestries. On an easel was a modern work by Stewart Francis Easton that combines embroidery, music, and the Raspberry Pi 2. “I shared a room with Raphael. Just me and Raphael. That’s the dream,” Stewart says.

His work is called The Next Verse, and was part of a digital event at the gallery. It depicts the cycle of life, using scenes of a family along a snaking path through the canvas. “From childhood to death and round again,” explains Stewart. “You begin with a father and child and end with that child’s son releasing the spirit of his father to enable the cycle to begin once again.”

The work is completed by a soundtrack. There is a 23-minute composition by Michael Tanner, performed on a psaltery, a stringed instrument often seen in medieval paintings. Additionally, viewers can trigger sounds. “Each illustrated event has a small triangle stitched next to it,” reveals Stewart. “The viewer is required to touch these triangles (one at a time) to trigger the sound that corresponds to the storyline.” 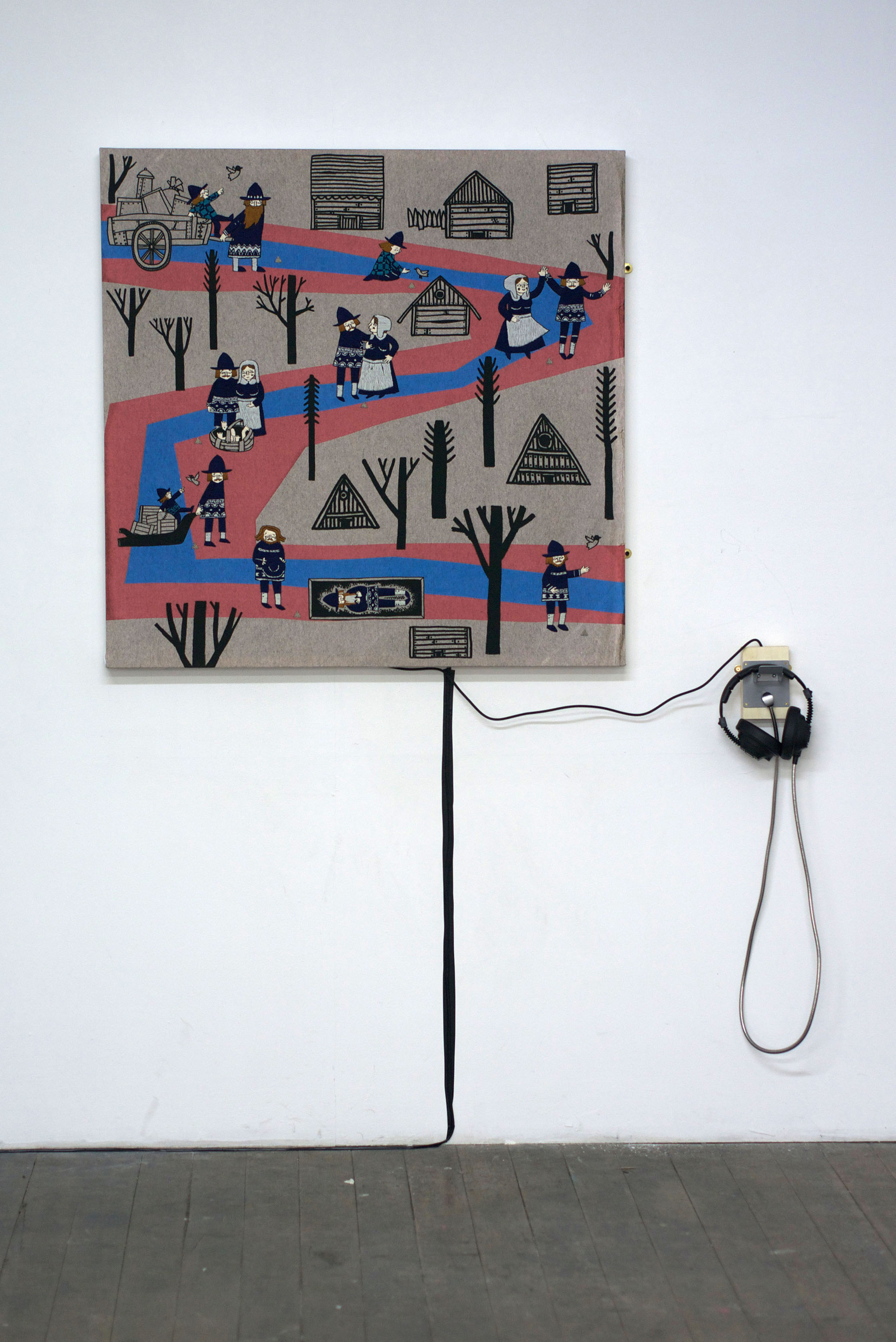 Gawain Hewitt created eight sounds for these points in the journey. “One of the sounds has a bellows playing – almost like a broken accordion with static sounds and whistling,” says Stewart. Another has a recording of sounds made at his daughter’s school playground. These sounds were all required to be able to be played along with the original soundtrack which plays on a loop.

Gawain also carried out the technical implementation, which is based on the Touch Board, made by Bare Conductive. Although the Touch Board can be used to trigger MP3s or play MIDI sounds itself, it can only play one audio file at a time. Using the Raspberry Pi enabled Gawain to code polyphonic software, and use high-quality uncompressed audio files.

Gawain wrote the software using Pure Data (Pd), an open-source visual programming language for multimedia. “One of the really beautiful things about Pd for me is the ability to code in an exploratory way,” he says, “so that the act of coding software is a creative act. I have a background in audio engineering, so I find the interface and ‘metaphor’ used very empowering and intuitive.”

The triangles on the canvas use conductive thread to detect touch. So, what limitations does it present as a material? “From a purely aesthetic viewpoint it’s the colour of the conductive thread,” says Stewart. “I think you can only get either grey/silver or gold.”

Gawain adds: “You do need to consider its inherent fragility, and try to avoid crossed lines in the wiring for better capacitive touch. Also, it can get dirty when touched!”

For the next verse of their creative collaboration, Stewart and Gawain have several works in progress, including some that might use lights triggered by sound running through a Raspberry Pi.