Teletext makes a comeback with the help of the Raspberry Pi

The BBC’s Ceefax teletext service continued in the UK right up until analogue TV transmissions ceased in October 2012. We still miss its no-nonsense approach and blocky graphics, so we’re delighted that teletext has been revived by the Teefax project.

Users can install the free software on a Raspberry Pi, connect its 3.5mm video output to a TV (via the SCART socket), then hit the teletext button on the remote control.

Project founder Peter Kwan is a former teletext engineer who carried on working in the field as a hobby. “As the analogue TV network was being shut down, I was thinking about how I could generate my own teletext,” he recalls.

With the idea of making a low-cost basic teletext inserter, Peter manufactured his own VBIT hardware and managed to get a full teletext service running on it.

Initially, there was a practical use for the system. “There is a lot of hidden signalling in the teletext signal,” Peter reveals. “The BBC uses a system called Presfax which hides schedule information in databroadcast packets. They also have special signals that let London take over the whole network in an emergency.”

When the Raspberry Pi was launched in 2012, Peter soon realised it could be used instead of his bespoke hardware. “It had I2C, SPI, and GPIOs to drive and it was cheaper than the AVR boards that I was using, so I hooked one up and it worked. I made a second spin of the board and called it VBIT-Pi.

The next big breakthrough came when Alistair Buxton managed to create a teletext signal direct from the video output of the Pi. “I bypassed the teletext stream from my hardware to Alistair’s software and instantly halved the cost of a teletext system,” says Peter. 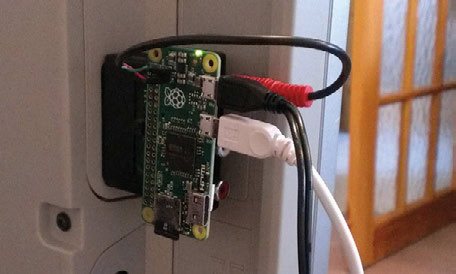 “The only thing that the Pi can’t do is overlaying from video, so things like subtitles and newsflash need an original hardware VBIT.” The Teefax server is actually an original Pi Model B running Subversion.

“The real number is more because people are welcome to submit their own pages and designs and we will put them into Teefax for them.” To do so, you can use Peter’s wxTED page editor on a PC.

Meanwhile, Peter is currently working on a more flexible version of the VBIT system with a much faster update speed. “This actually has a commercial application in the betting industry where a small delay in reporting the ‘off’ in a horse race can be costly.”