Get a look at more Raspberry Pi Halloween projects that are sinfully good...

Yesterday we looked at three spook-tastic Raspberry Pi Halloween projects. If you think those were scary, then get a pillow ready for our remaining four frightfests...

You are entering the vicinity of an area adjacent to a location. The kind of place where there might be a monster, or some kind of weird mirror. These are just examples; it could also be something much better. Prepare to enter…

Or not in this case, as this is not a real door. Or a Twilight Zone parody. While the Haunted House we started off this feature with shows the entrance to a spooky residence, this kind of project is what you might find inside as you wander around. It’s a peculiar metal door, with a window you can see through. A knocking sound is coming from behind it; perhaps someone is lost? As you get closer, you see through the window a normal-looking lounge. You can’t see anyone, but the knocking is still there and as you reach for the handle, a monstrous face appears. 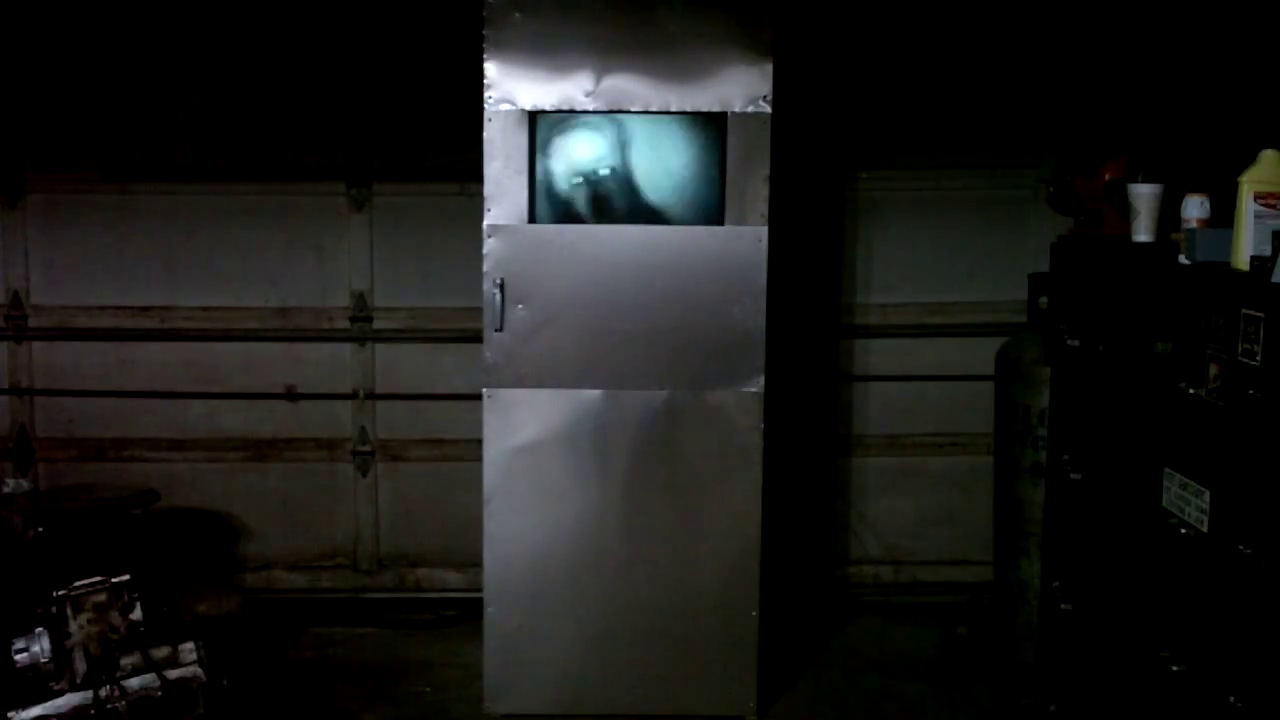 Cabe’s idea was to create a modern haunted house effect on the cheap that was different every time you saw it. As well as the pop-up scares, there’s ghosts and monsters flying around in the ‘window’ (actually an LCD screen), and the scares and sounds you can create are as many as you can imagine. The knocking sound comes from pistons smashing against the door.

As well as the door, Cabe has previously created a Scary Porch, which he describes as “[an] exploration of my idea of consuming someone with light and sound, to the point where they wanted to run away.” Unlike our Haunted House project from earlier, which was doorbell-activated, the porch could sense how far away you were from the door. As you started to approach, it would start playing creepy sounds and slowly turn on some bright red lights. As you got closer to the door, the louder the sounds became and the brighter the lights got, until screams and roars began playing when you were in knocking range. 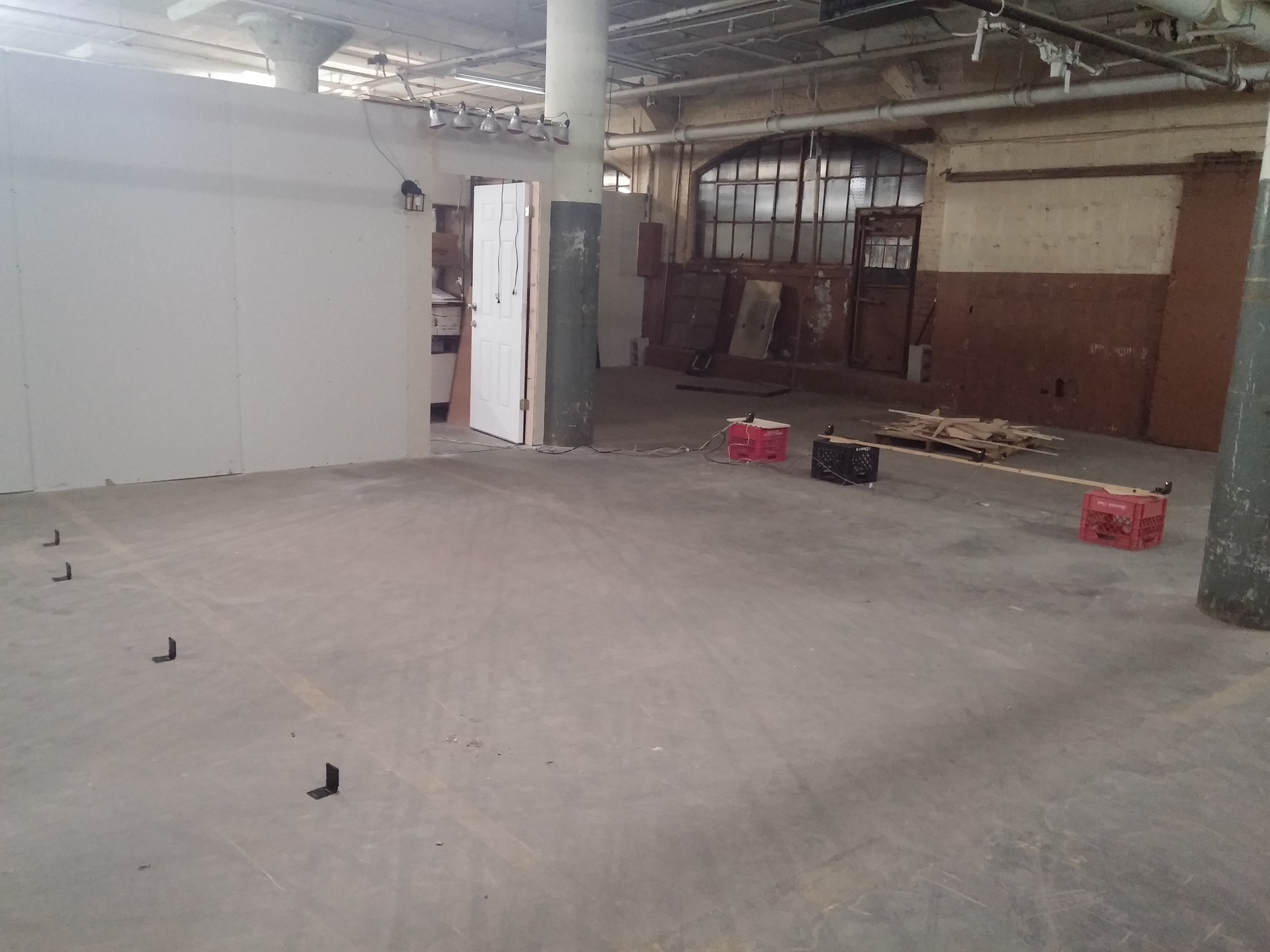 “The Scary Porch was only set up in my shop,” Cabe explains to us. “But, people did see it and did what I thought... they wanted to get away from the sound.”

Both are quite elaborate projects and if you plan to make anything similar yourself, Cabe advises you exercise extreme caution unless you want to make yourself the centre of your Halloween display. This year he’s toning it down a bit: “I plan to... make a wooded path, or [the] front yard a bit more scary.”

At Cabe’s house, we’re sure it’ll be more than just a bit scary.

Shot through the stomach

Scary pumpkins, doors, and houses are one thing, but a good scary costume is a big part of Halloween. While you can’t beat the classics of vampires and witches and zombies, more imaginative and horrific costumes are popping up every year. Luis Martin took his costume to a new level by adding a Pi and some clever coding to make it look like he’d been shot right through his stomach, something he’d seen on The Walking Dead. 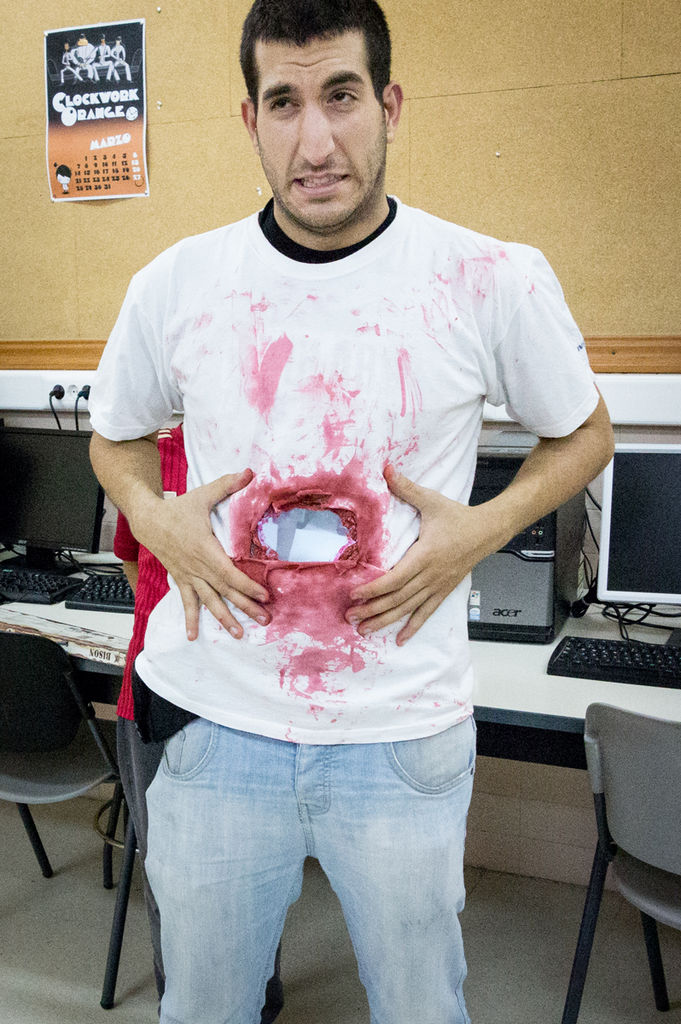 It’s actually quite a simple and ingenious design. Using a Raspberry Pi as its main core, Luis took a Pi Camera Module and a 7-inch screen and had a live feed from the camera play onto the screen. By having the Pi and camera on his back, he was able to relay the live feed to the screen that was showing through his shirt, giving the illusion that there was indeed a hole in his stomach. Scary indeed – just don’t ask him to turn around to ruin the effect.

It also involves a bit more than electronics, though: a later border was created around the edge of the screen to simulate the gruesome look of flesh to better create the effect through his clothes. With skin-tone paint added along with blood and detailing to get the right effect, he also cut up an old T-shirt and stained it with fake blood. “You have to be eager to stain your hands,” Luis tells us. “Especially blood. The more blood in a zombie costume, the more realistic!” 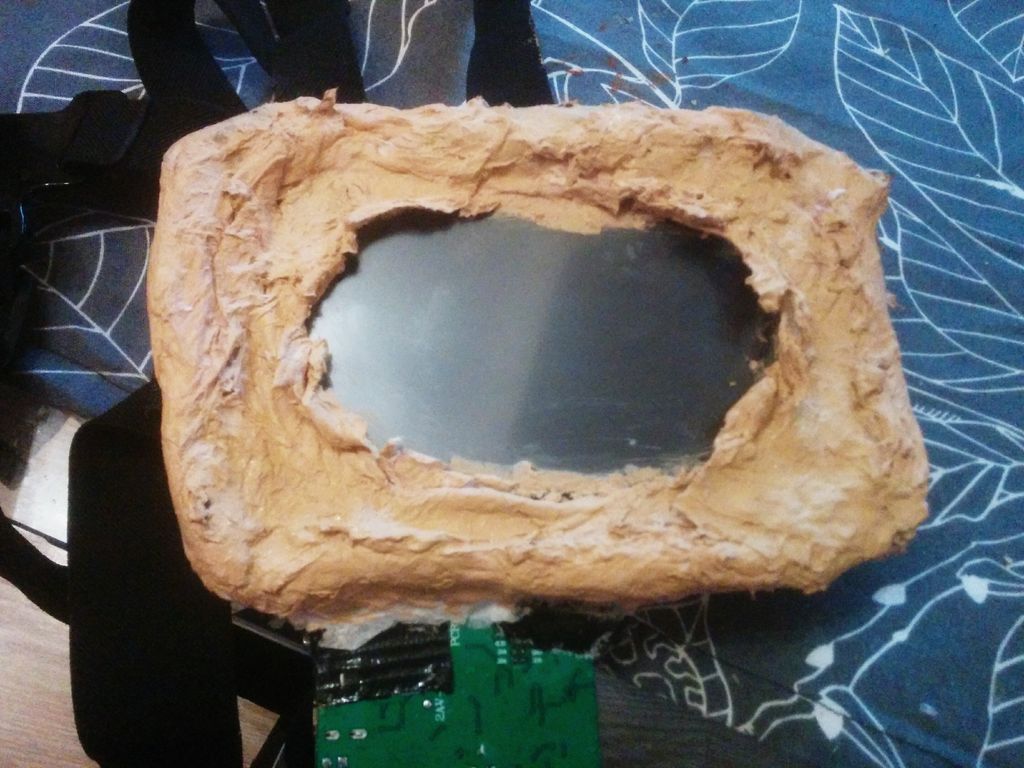 With the shirt ready, Luis took a GoPro harness and had it hold the screen down to his stomach, as well as using it to attach the camera to the correct spot on his back for the illusion to work. This is then simply connected to the screen via the HDMI port on the Raspberry Pi - switch it on and you’re ready to go!

It certainly sounds gruesome, and you’d think seeing a zombie walk around with a hole in his stomach would make everyone scream and run away. “Everyone wanted a picture through the hole, like some kind of blood-coated selfie?”

Kids these days, eh? You put a hole in your stomach and they’re not even scared.

Scaring people as they come to the door is big business in spooks, it seems. We’ve seen porches, doors, and monster parties that give at least some warning or try to build a scary atmosphere, but the HalloweenPi is taking the jump-scare approach over building suspense.

To understand HalloweenPi, we need to learn about the history of Halloween at 3. A yearly tradition from the people at 3 Michelle Court, a display of their scariest Halloween-themed ideas is created to wow (and maybe frighten) trick-or-treaters or passers-by. Constantly trying to figure out a way to make each year better by adding to the display, Chris Kyte had a bit of a brainstorm: 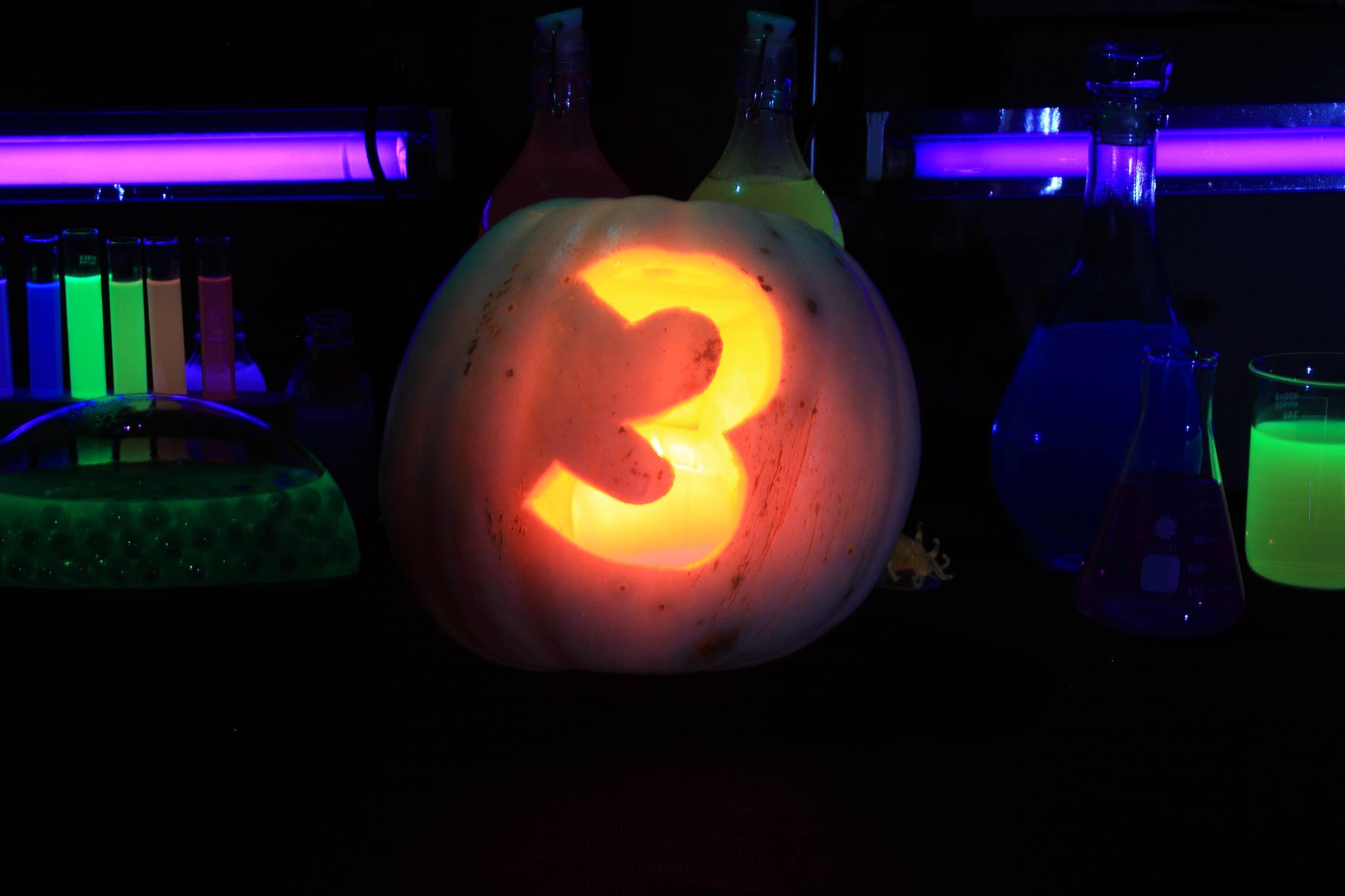 “We were considering how to draw in a few more trick-or-treaters to our haunt. We had decided to start collecting canned food donations for our local food bank when I remembered the Raspberry Pi B+ I had received as a birthday present earlier in the year. I started to wonder if I could build a pneumatic prop or two in order to ‘up our game’.”

Currently, the massive tunnel houses a laboratory of rainbow-coloured mixtures in beakers and test tubes that react to black light, a projected puppet that compliments kids on their costumes, and all the other trappings of a Halloween-themed display. This new addition will have a motion-controller prop attached to it that will spring up and scare people as they arrive for Halloween at 3.

“The HalloweenPi Controlled Pneumatic Prop will be a really spooky piece,” says Chris. “It will act as an ambassador to the haunt, reacting to the people who walk by: the prop will spread its wings wide and will scream a mighty scream! The way we’ve designed the props and pneumatics means that they are modular. They don’t have to remain the same each year!” 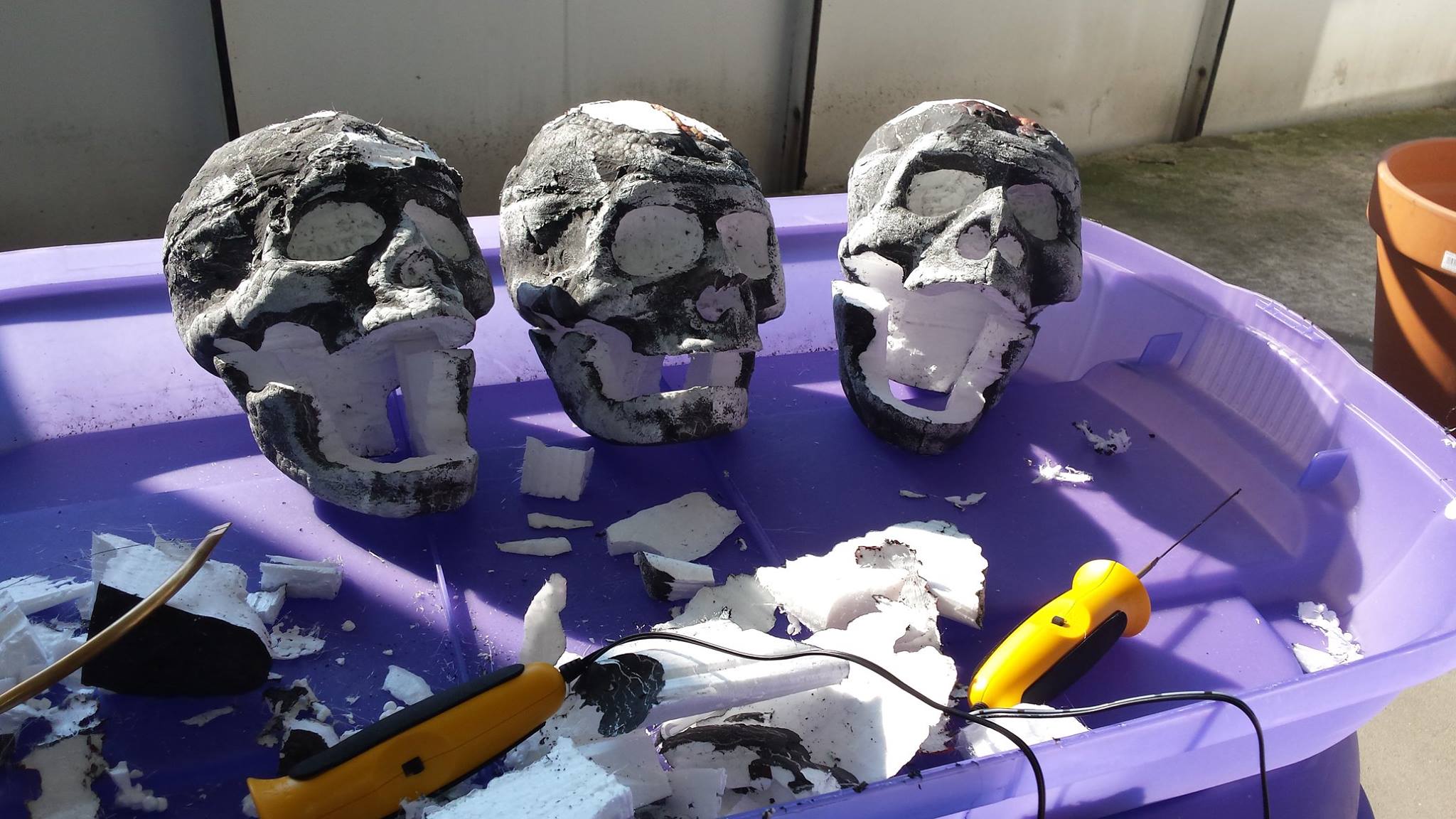 The frights are for a good cause, though, as Hallowen at 3 takes donations for the local food bank. “The extra excitement generated by the pneumatic props should make a big difference to the number of people that show up. Hopefully, we’ll see an increase in food donations as well.”

We question how such an endeavour can be truly evil in the Halloween spirit with such a wonderful result, but we’ll let it slide this time.

Featured in this very magazine, this spooky skull comes alive

Zombie head? Too much flesh. Meet Mulder the skull, a very interactive head that you can control to scare the living daylights out of anyone who makes the mistake of passing by. With full control over his jaw, neck, and eyes, he can move around to watch anybody. Not only that, but you can light him up in a variety of colours and have him give out deadly screams or creepy owl hoots.

Mulder was made by Mike Cook as part of the Pi Bakery, and featured as a project you can create in The MagPi 38 - head to page 58 to get started. 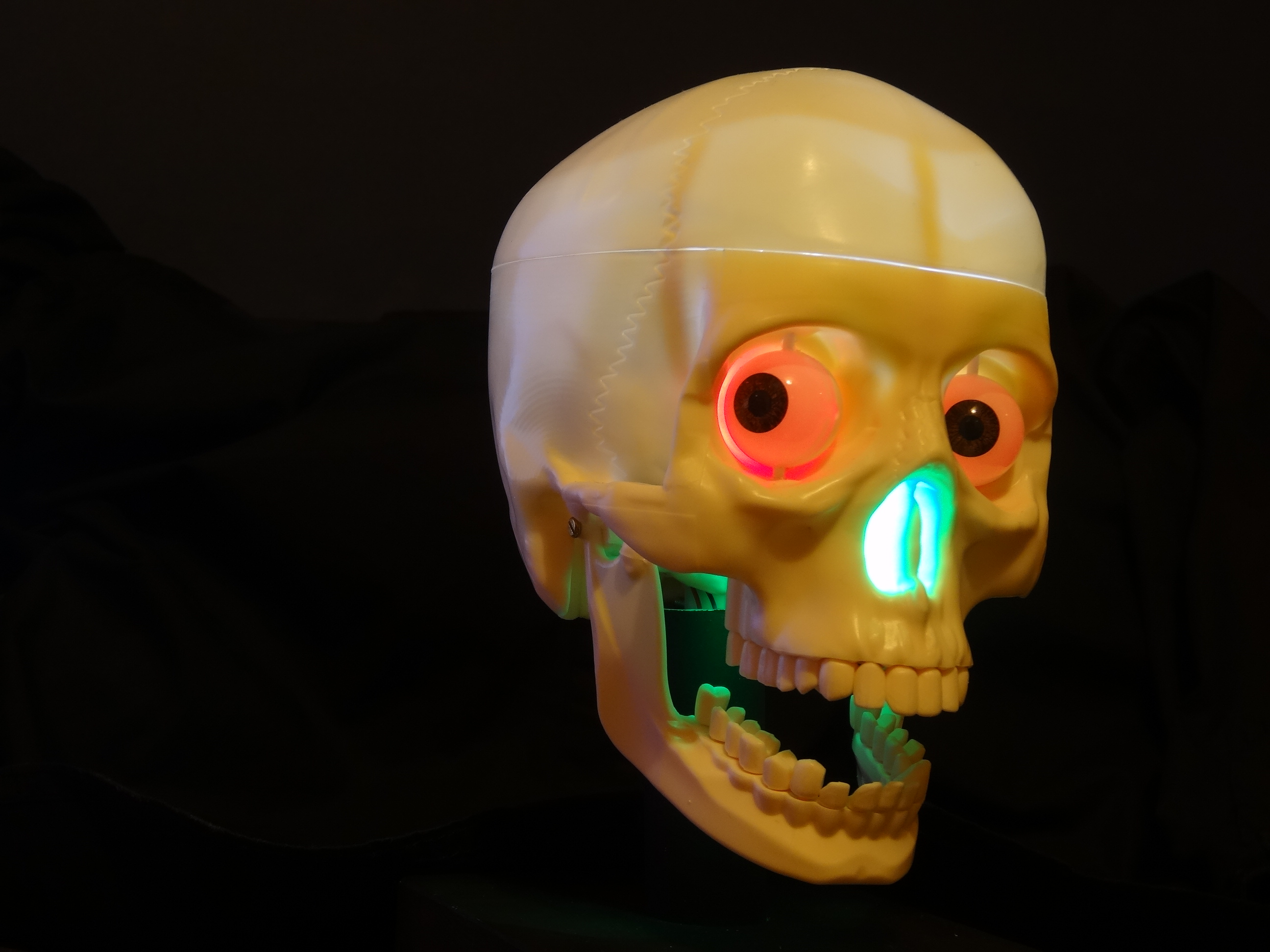 We won’t spoil the surprise, but it involves a lot of soldering and tweaking as you install several servos and motors to articulate the eyes and jaw, along with several lights, a speaker system, and a way to control the neck. It’s all controlled from an interface written in Python, the code listing and files from which are available in the tutorial.

We suggest you put a hidden camera near the skull so you can track trick-or-treaters as they approach your door. That’s sure to scare them off, leaving more chocolate for you.