Bruce Shapiro is a maker and an artist. Unlike Picasso or Rembrandt, Bruce doesn’t paint with oil and brushes. “My medium is motion control,” he tells us.

We caught up with Bruce to chat about his latest project, Sisyphus. Hot on the heels of a phenomenally successful Kickstarter campaign, Bruce has a lot to talk about.

“Sisyphus is a computer-controlled machine that moves a magnet beneath a field of sand,” Bruce explains. “On the sand, a steel ball follows the magnet’s changing position, creating dune patterns in its wake.”

Sisyphus is one of the entries in our Top 75 Projects community vote!

In Greek mythology, Sisyphus was condemned to roll a boulder up a mountain for all eternity. “In my art, Sisyphus is a kinetic sculpture that rolls a ball through sand, forever creating and erasing beautiful patterns.” Bruce says that watching Sisyphus evokes a meditative feeling.

“Initially, I viewed Sisyphus as a kinetic sculpture. I still do! But over the years, I began to see a parallel with the relationship between making musical instruments and writing songs. As different as these creative skills are, both are absolutely integral to the final art.”

Bruce has been creating Sisyphus sculptures for nearly 20 years, and has permanent installations in Switzerland, Germany, and Australia.

The heart of the project is the Sisbot, a robot that controls the metal balls which create the artwork in the sand. 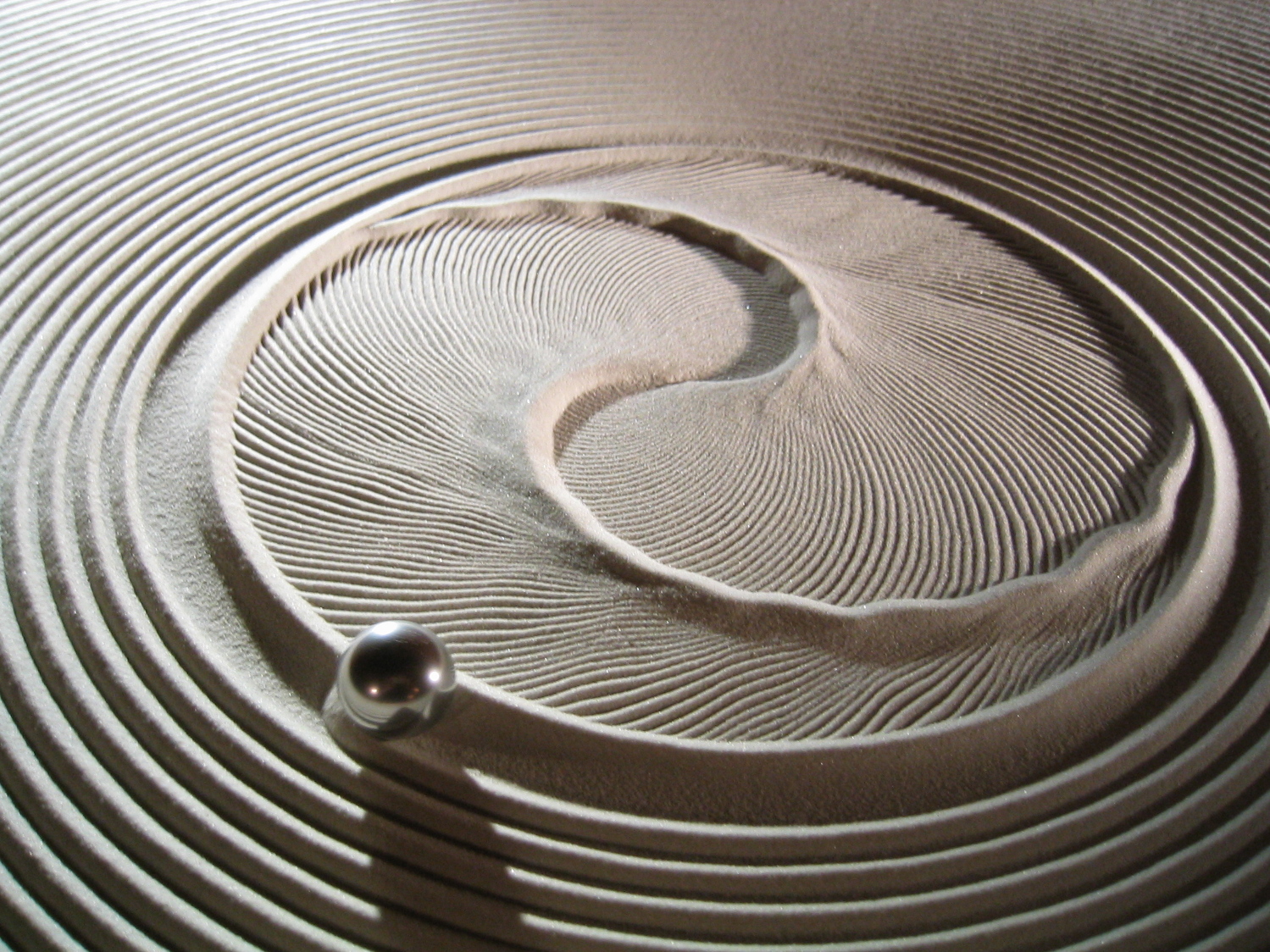 “Sisyphus is a CNC machine,” reveals Bruce. “It doesn’t use G-code for its file format, but the principle is the same: a toolpath determines where the ball moves and its speed. With Sisbot being a polar machine, these moves end up producing spiral arcs, but this still works since small arcs connected together can emulate any path.

“My patterns tend to be algorithmic since I never learned to draw,” Bruce continues. “But anyone can create paths for Sisyphus – just draw something without picking up your pen. If you can record the positions of your pen as you draw, you can compose for Sisyphus.”

A Raspberry Pi is the perfect computer to control the Sisbot and create the works of art, but it wasn’t always that way. “For a very long time, all my motion-control artworks were controlled by Windows PCs running DOS,” says Bruce. “In fact, three still do, running every day in their museums.

“I don’t like change when it comes to something that works,” Bruce admits. “Through many trials, and sometimes painful dead ends, I’ve learned that community matters.”

It was the Raspberry Pi community that convinced Bruce to switch over to a low-cost microcomputer. This was “more important than form factor and low cost,” he tells us.

“The choice to use Raspberry Pi in the new home versions of Sisyphus was driven by all the 30-somethings that I listen to,” says Bruce. The community informed him that JavaScript is essential and Node.js runs well on a Raspberry Pi.

“The size of the community and its willingness to share makes the Raspberry Pi unique,” adds Bruce.

The requirements of the Sisyphus table are complex. “Three levels are involved,” he explains. At the lowest level is “firmware written in C, running on the SisBotBoard”. This was created by Brian Schmalz for an earlier project Bruce created, called EggBot.“Brian started many years ago with the initial crude C code I wrote for running my steppers,” says Bruce.

The second level is higher-level motion control, recently ported to JavaScript by Bruce and cleaned up considerably by Alex Wayne (magpi.cc/2fXDqs7). This code runs in Node on the Raspberry Pi.

The third level is algorithmic path generation. “I originally did this with AutoLISP routines running in vintage AutoCAD,” says Bruce, “but now I use the Grasshopper Rhino 3D plug-in.”
History matters

“I became fascinated with the challenge of connecting motors to my computer about 25 years ago,” Bruce recalls. “The easiest and most compelling way to demonstrate its potential is to create a machine that can draw, using just two motors.”

EggBot was Bruce’s first art machine. “[EggBot] rescued me from being locked up as a madman and for being so obsessed with, and talking incessantly about, the potential of hooking up motors to a computer,” he laughs.

“[EggBot] is actually pretty cool,” he says, “and people I showed it to, for the most part, got that. I spent many years building successively larger drawing machines that eventually were capable of moving cutting tools like plasma torches to enable me to cut out intricate shapes, mostly in metal, to make sculptures. 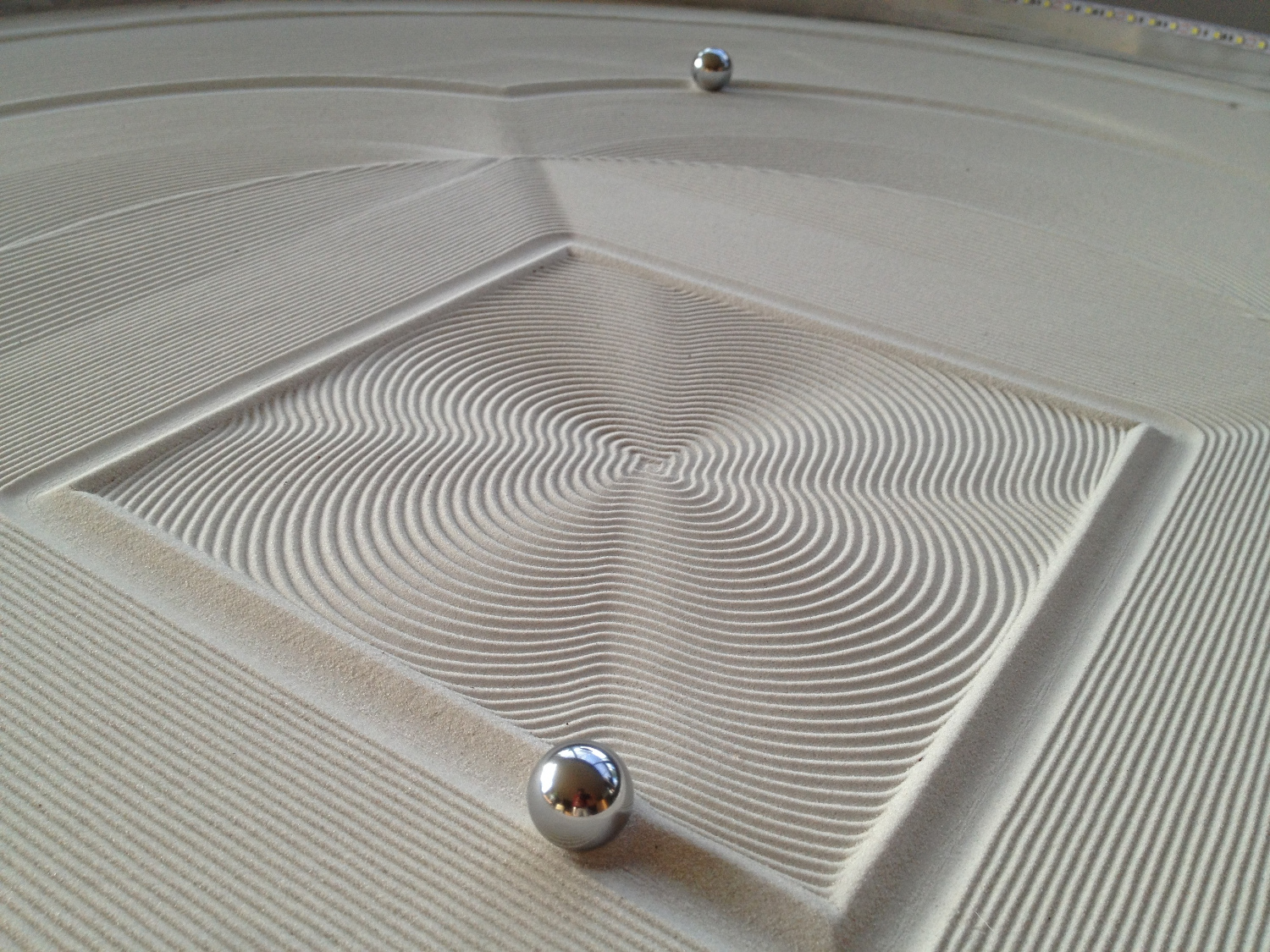 “I fell in love with watching them move,” continues Bruce. “As I got better at designing new machines, the components that made them possible – stepper motors and the electronics that run them – were getting easier and cheaper to get hold of. In 1998, Sisyphus became my first CNC machine to escape the studio – transitioning from a tool used for making sculpture, to being the sculpture itself.”

After 20 years of making, and refining, the Sisyphus project, Bruce was wary of making it available to buy. “Probably the biggest reason was not knowing how many people would respond.”
He needn’t have worried. What started out as a project to raise $50,000 eventually ended up getting close to two million dollars.

“When it comes to planning to make stuff for others, it helps to know how many will want it,” says Bruce. “Kickstarter is a very public space to show what you want to do and find out how many people are supportive, not just with words, but with their hard-earned cash. It’s an amazing leap of faith on their part, something we’re still coming to grips with and take very seriously.”