Why do astronauts on the ISS float? Find out with our experiments into gravity

Ask most people why astronauts like Tim Peake float around on the International Space Station and there is a good chance they’ll say, “Because there is no gravity.” If you think about it, this can’t be the case. The ISS orbits the planet at 400km, but the Moon is nearly 100 times further away and is still subject to Earth’s gravitational pull. So why are astronauts weightless? It’s because the ISS is constantly in free fall, and so the astronauts living inside it experience weightlessness.

The full article can be found in The MagPi 46 and was written by Richard Hayler. If you like this tutorial, you can find more in our Essentials book, Experiment with Sense HAT 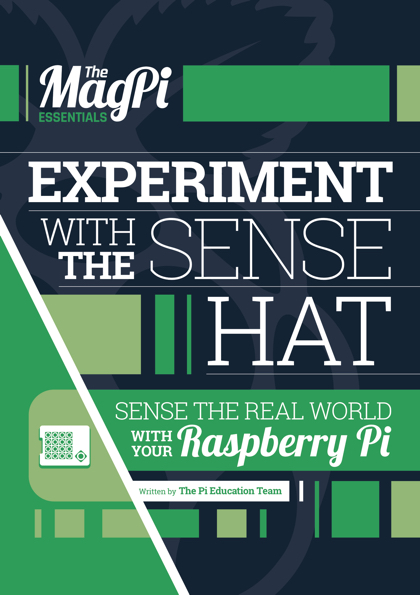 This can be difficult to wrap your head around, so we’ll use the Sense HAT to explain it.

Something to provide a soft landing

If you’ve been following the previous Sense HAT Science articles, this should all be familiar now: attach the Sense HAT to your Pi and power it up. Open IDLE3, or just type python3 in a terminal window, and then import the SenseHat library and connect to the board:

There are a number of ways we can measure motion, forces, and orientation with the Sense HAT: it has a gyroscope, magnetometer, and an accelerometer. We’re going to use the accelerometer, and the line of code we need probably won’t be a surprise:

We’re using _raw() as it returns results in Gs. One G is equal to the force of gravity on the Earth’s surface (9.8m/s), and you often hear jet planes, spacecraft, and even roller-coasters described in terms of how many Gs their riders experience.

The three values measured by the Sense HAT – x, y, and z – correspond to the pitch, roll, and yaw axes. If we run the following Python snippet:

…then we should see a continuous stream of the x, y, and z values displayed on screen. Jiggle and wiggle the Pi and Sense HAT around and see how the numbers change. Can you carefully move the Pi so that just one of the axis values changes?

For our experiment, we need to able to record x, y, and z readings constantly and save them to a file so that we can analyse them later. To make things easier (and to make our data file smaller), we will use the joystick to start and stop recording. There are several ways of doing this with Python, but the code uses the evdev library to register joystick presses.

To run the experiment, power the Pi up from a battery pack and secure the two together using rubber bands or cable ties. Start the code and then disconnect the keyboard, mouse, and display cables.

Now find somewhere from where you can drop the Pi. The greater the distance it falls, the easier it is to see the free-fall period. However, don’t forget that you need a big, soft landing zone!

When you’re ready, press the joystick and you should see the 8×8 LED matrix light up all green. That means data is being recorded, so bombs away! Once the Pi has landed, press the joystick again to end the logging (the LEDs should briefly flash red, then turn off completely).

For the data analysis, we can also use the Pi. Plug all the cables back in and start up LibreOffice Calc. The code conveniently writes the data into a CSV format that can easily be ingested by this (or any other) spreadsheet program, which can be used to plot graphs of our data.

From the graph, you should see that before the drop, the Sense HAT accelerometer measures approximately +/-1G, then falls/rises to 0 while it is falling. You’ll probably also see the ‘bump’ corresponding to the landing (hopefully not too big).

So, now we’ve shown that a falling object will experience zero G, we can see why astronauts on the ISS appear to float. However, if the ISS is constantly falling, why doesn’t it just crash into the Earth? This is because the Space Station is also moving ‘forward’ at a speed fast enough to ensure that it keeps missing the Earth and stays (falling) in orbit.

You can, of course, use the Sense HAT to measure forces greater than 1G, too. Try taking your portable Pi and Sense HAT on a playground ride or, for some serious Gs, a theme park attraction. If you’re going to take your Pi and battery pack on a roller-coaster, though, make sure it is securely stowed away in a zippable pocket!