With our 100th issue and Christmas fast approaching (at the rate of one day per day), we thought we could combine the two and develop a game that combines both celebrations. Enter Santa’s Run, a game where you control Santa’s sleigh to try to drop The MagPi magazines down the chimneys of overexcited children of all ages. All played against a night sky which is exactly as it will look on the big night in 2020.

It’s Christmas Eve, ten to midnight in 2020. The moon is waxing gibbous, at a phase of 73%, the constellation of Orion stands as high in the sky as it gets from these latitudes, and Santa is about to make his overhead pass. He is propelled through the sky by a mixture of magic and the energetic shaking of his eager recipients – that’s you. His mission is to deliver every single copy of The MagPi magazine to the people waiting below. He has two passes to the end of the screen and back. Will he make it, or will some fall into the soggy snow? 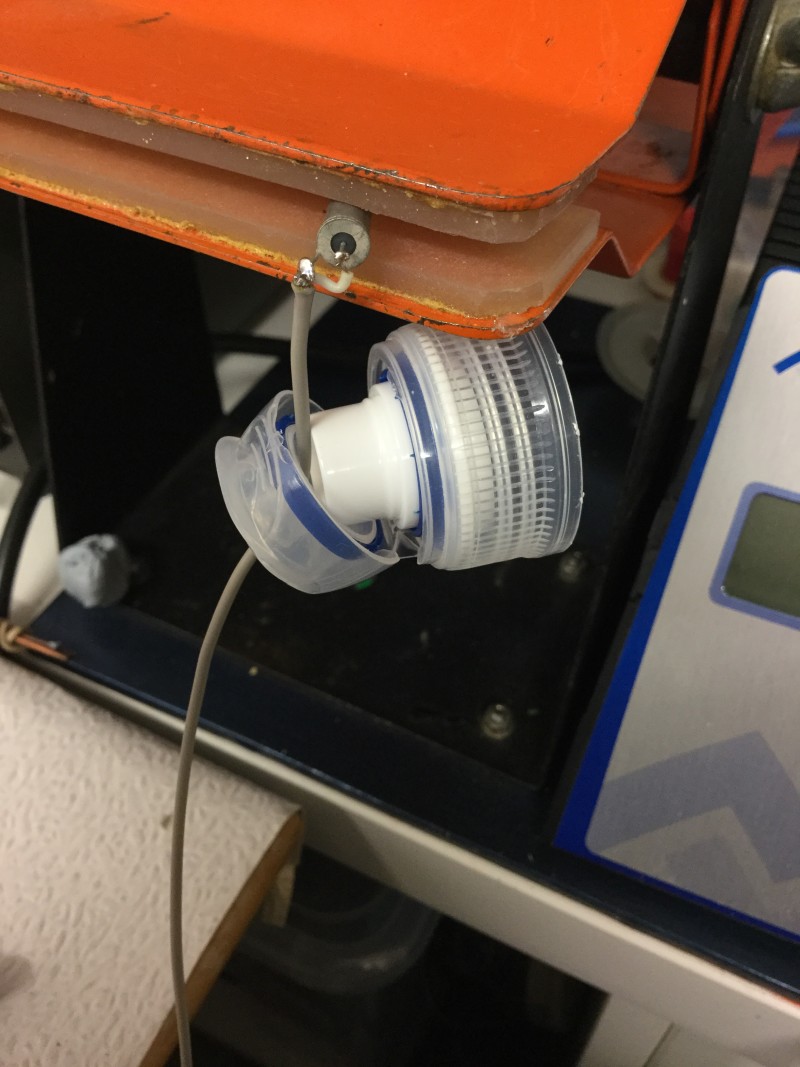 The hardware controller we are about to build is about as simple as it gets. It consists of a tilt switch mounted in a plastic drinks bottle. This then connects to a GPIO pin on Raspberry Pi, and the rest is software. We first used tilt switches in The MagPi issue 52 with the sliders game – coincidentally also a Christmas game, and one of our favourites. But this time we only need one switch. We used a small (140mm) flip-top drinks bottle from a discount supermarket, and mounted the switch in the top.

We used thin screened microphone wire for the connection; it is only 1.6mm in diameter. This makes for a nice neat job, but any sort of wire will work. First we drilled a 2mm hole in the flip top cover, and then threaded the wire through. Then we trimmed the wire on the tilt switch down to about 5mm and soldered a wire on each connector (Figure 1). Then we pushed the tilt switch through into the bottle until the wires were below the level of the rim, and flooded the top recess with hot-melt glue, ensuring the tilt switch was vertical, as shown in Figure 2.

Step 04: Connecting to the GPIO pins 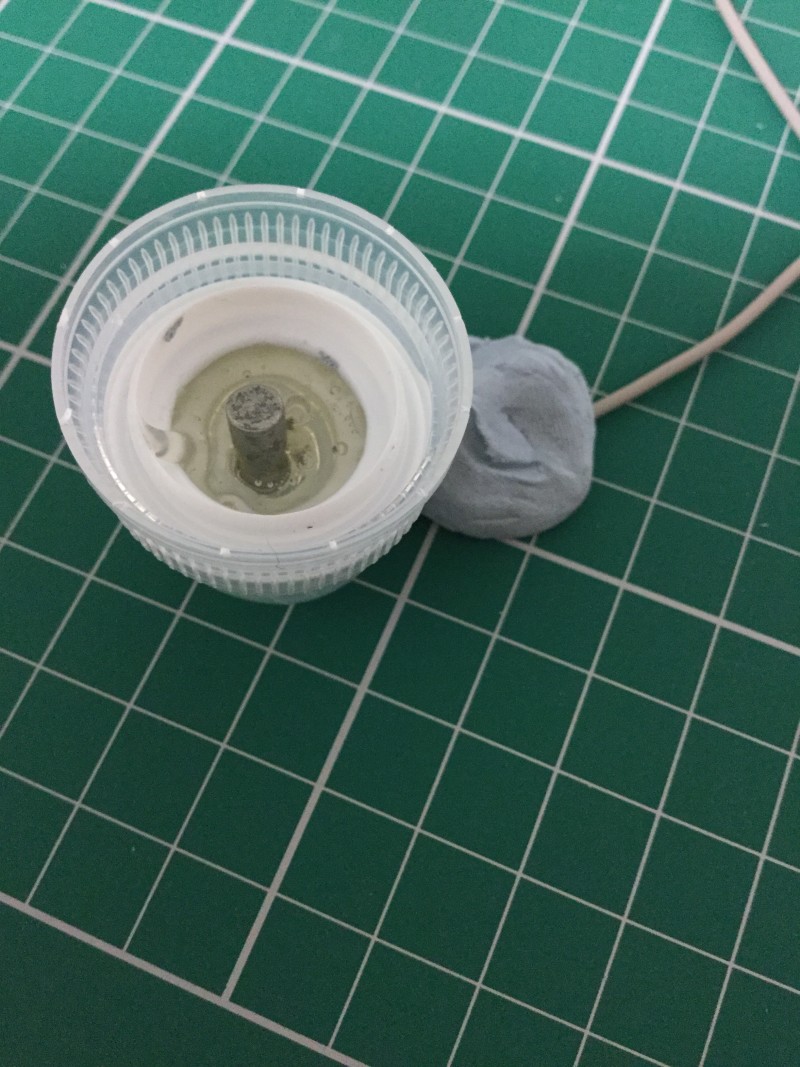 To connect the other end of the tilt switch to the GPIO pins, we used a ten-pin dual-row header socket. We connected the wires to pins 2 and 9 of the header socket; this corresponds to ground and GPIO 3, as shown in the photograph in Figure 3. We used an I2S pin because of the, already fitted, 1K8 (1.8kΩ) pull-up resistor to give it good immunity from interference. Figure 4 shows the physical layout diagram for the whole interface. We then ran a short test program, available on our GitHub page, to check it worked.

One of the major components of this sort of project is the graphics, so we got them together before starting on writing any code. We looked around the net for royalty-free Christmas animated GIFs of Santa’s sleigh, and found a good one with seven reindeer. This was too many for our needs, so we used a photo editing package to remove all but the first pair. We split the GIF into its separate frames and started editing: first removing excess reindeers, then making the background transparent, and finally adding the Raspberry Pi logo onto the sides of the sleigh. 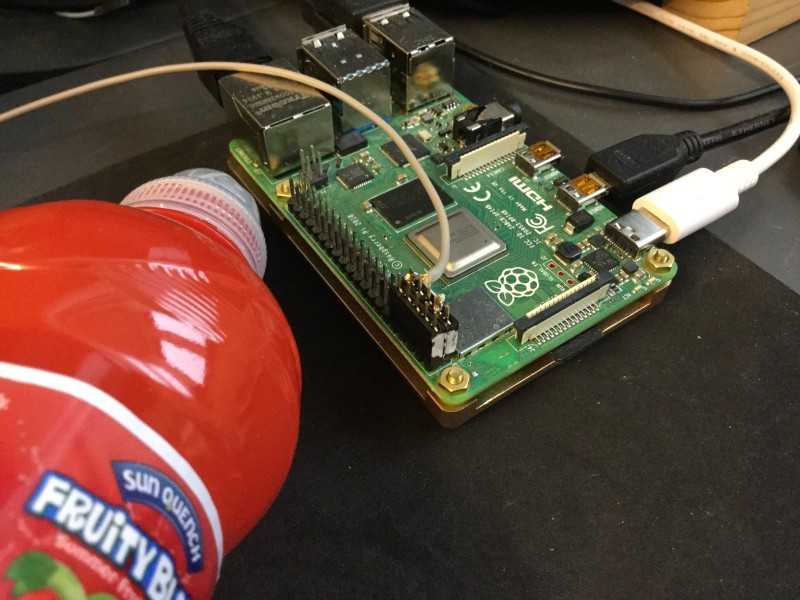 Then we found a chimney and made it a double chimney with a copy and flip of the original clip art. We also did some retouching on the snow line between the chimneys, to make the transition smooth. Most importantly, we made the snow line at either side of the chimneys end at the same height. Finally, we made two lengths of just plane snow: one the same length as the chimneys, and the other half the length. In this way, we could mix and match the graphic elements in the scrolling ground display.

This could have been hard work, going through all the back issues online and taking screen grabs, but fortunately the magazine was planning to put all the covers on the front page of the 100th issue, so they had gathered them together already. We only had to scale them, in our case to 50 pixels wide. The final element was the star-studded background for Santa to ride across, but been very keen on astronomy, we wanted this to be accurate, along with the position and phase of the moon. So we turned to a great open-source planetarium package Stellarium.

Stellarium has been around for at least 15 years and is, by now, a very sophisticated product available free for all three major platforms. We used it to look at the sky as it would be on Christmas Eve 2020. While leap years keep the stars in the same place at a specific date from year to year, the moon’s position and phase will change. This year the moon is waxing gibbous, at a phase of 73%. ‘Waxing’ means it is getting fuller day by day, ‘gibbous’ means it’s between half and full, and &quot;phase&quot; is how much of the moon you can see.

We took a bit of poetic licence when it came to the size of the moon. When looking at it in the sky, we actually perceive it to be bigger than it really is, so we enlarged the moon to match our perceptions. Figure 5 shows the negative of the background image we used. It also includes constellation lines and star names – note the position of Rigel in the constellation of Orion, as it is a key point in the game. Stellarium is much more than a simple planetarium and can animate all sorts of events like the analemma of the sun. 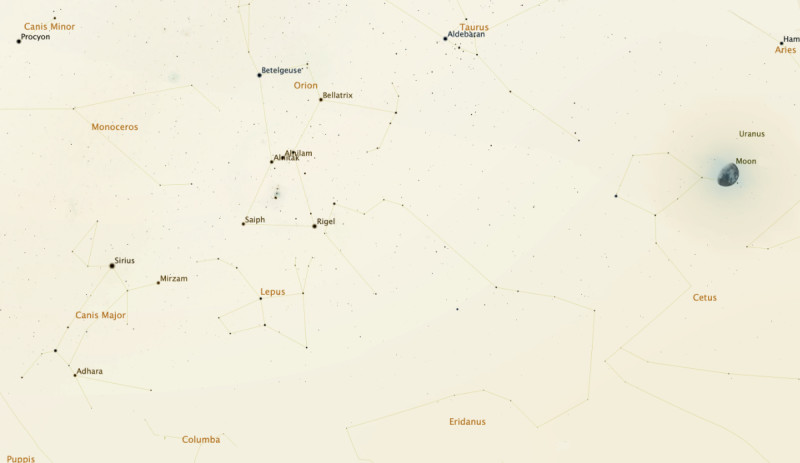 All the software and graphics files can be found on our GitHub page. You use the shaker to propel Santa across the sky, and need to keep shaking to keep him going. When you have positioned him correctly, you press the SPACE bar to release a copy of The MagPi magazine, which then drops to the ground. The longer it descends, the faster it drops, as the speed increases because of the acceleration due to gravity. The forward speed of the drop, however, is constant. This adds a bit of realism to what is a big suspension of disbelief.

While the magazine is dropping, Santa’s forward speed is transferred to vertical speed, allowing you to control his altitude. This is important, because aiming from low height is easer, but you can only drop magazines if the runners on the sleigh are above Rigel. If you attempt a drop and you are at the level of Rigel, you will be whooshed to the top of the screen. If the magazine’s bottom-left or bottom-right corner intersects the hidden capture rectangle on each chimney, it sticks there and is considered delivered; if not, then it sinks into the snow and is lost.

Santa makes two runs across the screen: right to left, then left to right. The objective is to deliver all 100 issues of The MagPi magazine. The game stops when either you complete the two runs or you run out of magazines. You get to see the total delivered at the end, along with a round of applause. Figure 6 shows Santa on his return run adding another magazine to those already delivered.

Next month, in part two, we will look at using two shakers. So get another tilt switch while you are at it, to make more shaking fun.