TonyPi is a 37 cm-tall humanoid robot with plenty of personality to keep you engaged as you learn fun ways to interact with him. He can either be controlled via an iOS or Android app, or you can use a Raspberry Pi, Windows PC, or Mac.

Containing a Raspberry Pi 4, TonyPi (£380 / $519) comes preassembled (aside from the connectable head), so the fun here is all about controlling him. He’s a solidly built fella, with angular joints and broad lower arms and hands primed for scooping up coloured balls on command. We rather liked his all-white finish, which contrasts with his 14 deliberately visible LX-824HV servos. Agility-wise, TonyPi can walk, shimmy, wave, bow, get up, and turn his head – all from the smartphone or tablet app, while more advanced controls can be added as custom list items via Python and OpenCV.

Swiping a finger in the window section of the Hiwonder app moves TonyPi’s head. You’ll need to swipe several times to get TonyPi to move much, though. Body movements can be initiated using the step controls at the top of the on-screen control panel, or by tapping within the circular control area. The upper control section causes TonyPi to step forwards and backwards and turn gently to one side, while the circular control section sees him jump peremptorily whichever way he’s instructed. 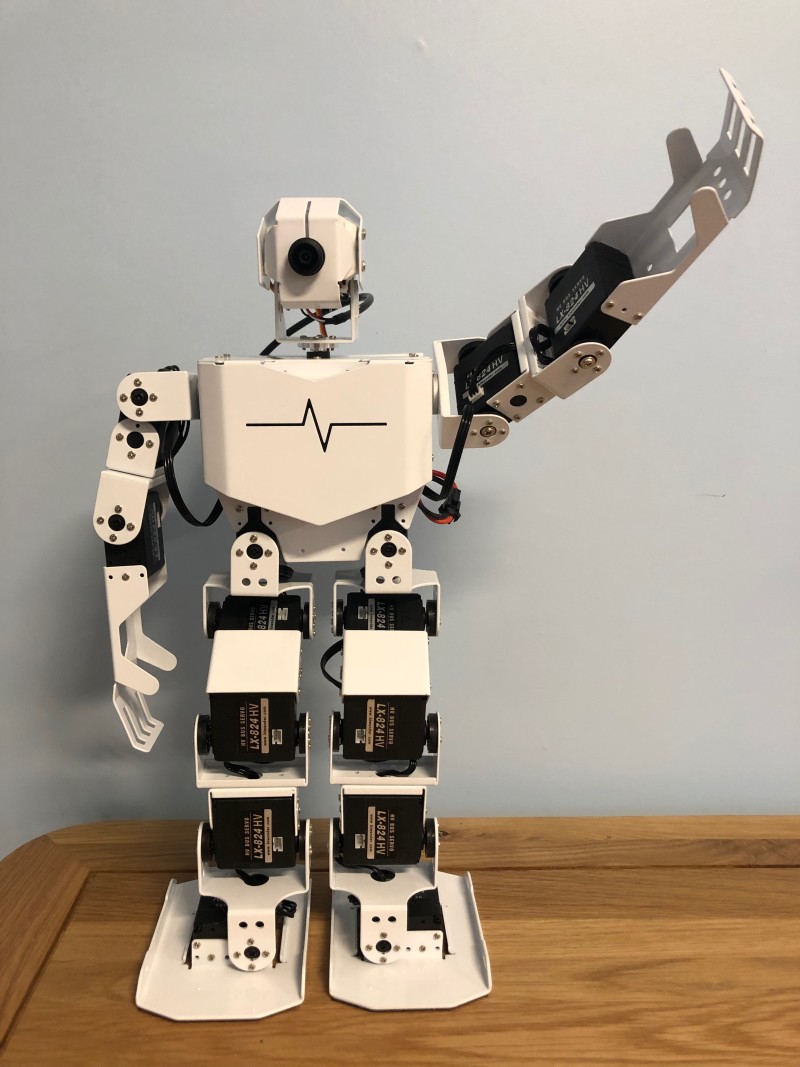 TonyPi’s object recognition ability is great. One neat trick is his ability to recognise faces, waving in response. We tried to fool him with posters of people and various charming but inanimate objects, but TonyPi was unmoved.

‘Colour tracking’ was also impressive: select a colour and move the corresponding ball gently in front of his 3-megapixel camera and TonyPi’s head will follow the ball’s movements. He will also nod when shown an object that’s red, green, or blue – our orangey-red sofa was an easy win – but he doesn’t always get it right.

Line following was largely successful: TonyPi strode along confidently on straight stretches, slowing but still following the line round gentle bends. It’s best to set his head to point down so he is able to follow the trail; if not, he may veer off unexpectedly at an angle. Three QR codes are included in the box: place these against a light background and TonyPi will wave, shimmy, or shuffle his feet. You can also create your own QR codes and have your robot do something else, having programmed a different action in Python using the instructions provided.

Be aware that switching user modes causes TonyPi to revert to his initial position, as we inadvertently discovered. If TonyPi is lying down, you’re likely to have one heck of a shock when you switch him back on and tap the ‘get up’ instruction on the Hiwonder app. TonyPi launched himself backwards as he automatically tried to stand upright from the prone position we’d left him in. Luckily, your reviewer caught him just as he was about to disappear off the edge of the kitchen table.

Instructional PDFs really help in getting the most from using TonyPi, but using a PC or Raspberry Pi as a control via SSH and a smartphone hotspot is extremely fiddly, more than pi‑top’s Robotic Kit with its built-in IP address-displaying OLED. Once set up, though, possibilities such as adding a microphone and trying voice recognition come into play.

TonyPi is an impressively designed robot with solid object recognition features. For longer-term entertainment, be prepared to log in remotely and use Python to access his more advanced features.