David Crookes talks to Dylan Radcliffe about his attempt to create a 3G phone.

Back in 1982, everyone’s favourite extra-terrestrial, E.T., needed to phone home, so an attempt was made, via a coffee can filled with electronics connected to a tinfoil-lined umbrella, and a Speak & Spell. For many of today’s modern makers, that would be an alien concept (not least because it just wouldn’t work). But it’s one Dylan Radcliffe may well have paid some thought to, given his struggles to create a Raspberry Pi Smartphone that works with 3G.

Usually our project showcases highlight the finished product, but in this case Dylan needs some help. When he began planning his project, he based it on the TyTelli DIY smartphone, a device made almost four years ago by Tyler Spadgenske that could snap photos, send texts, and make and receive calls. It used a specially written OS in Python and it was housed in a 3D-printed case. But it only worked on a 2G cellular network and Dylan found, to his horror, that his home country of Canada had finally phased it out.

“I’d purchased a PCB which was only designed to work with a 2G network, but I was lucky because the supplier had also released a 3G chip,” he says. “Unfortunately, all of the software produced by others for their phones won’t work with this new chip, so this is my challenge.” So far, he’s been able to call his landline using the command line, but he is vowing to do better and he hopes readers of The MagPi will be able to help. As it stands, Dylan has a functional pocket computer running Linux, but it remains a great example of determination. His primary aim of creating a Pi-based phone that could fit into his pocket has been a success, and that has been down to a great deal of time spent determining exactly how everything would need to be wired together in order to create a functional piece of electronics.

The build includes a Raspberry Pi B+ together with an Adafruit 3G GSM, an Adafruit Pi 3.5-inch TFT, and the Pi Camera Module v2.1. It also features an Adafruit PowerBoost 500 Basic charger, a 2500 mAh lithium-ion battery, a mini metal speaker, an Adafruit Electret microphone, and a rugged metal on-and-off switch. 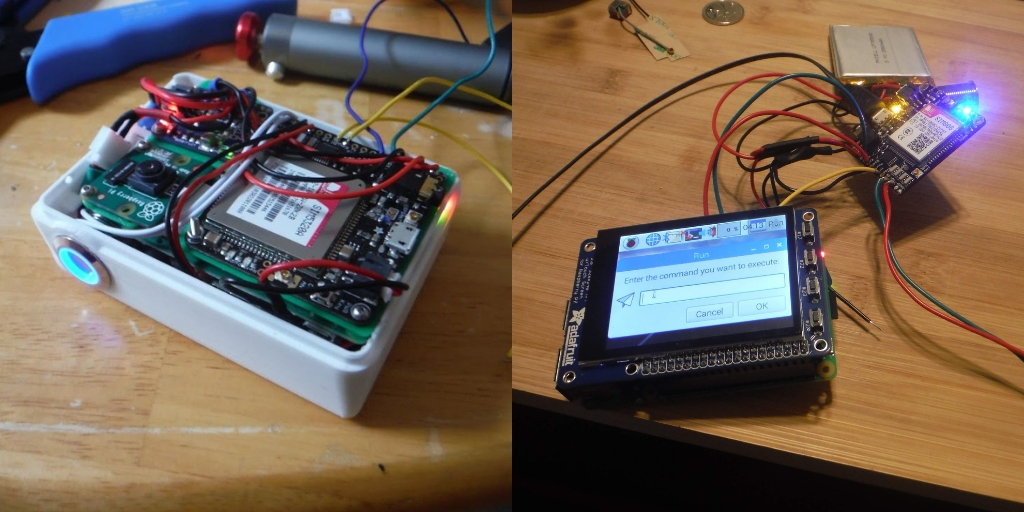 Wiring up a Raspberry Pi Smartphone

Most of the connections on the breakout board are wired directly to the GPIO pins on the Raspberry Pi. “Charging the phone and most of the power requirements are handled by the Adafruit FONA modem, which has a built-in mini USB plug and provided GPS,” Dylan reveals. “This does leave the phone at a disadvantage, though, because powering off the phone needs to be done via software before hitting the power button.”

To get everything to fit, Dylan spent a lot of time with a pair of callipers measuring distances between components and wires. “Once I had everything working, I created a small box on my 3D printer and tried to cram everything in, in a way that made sense,” he says, knowing that he would end up soldering in the tightest environment he’d ever experienced.
He then spent a couple hours thinking about how to optimise the design and writing notes before firing up his CAD software again. In the process, a small bracket was designed and used to attach some of the smaller PCBs to hold them in place. “All I have to do is get 3G working, but I’m sure I’ll get there in the end,” discloses Dylan.

This Raspberry Pi project first appeared in The MagPi #76 and was written by David Crookes.

> Read more from the maker