Aaron Saxon, UKFast’s Director of Training and Education, reveals, “We are distributing 120 Pis across the five sites: Holy Name RC Primary School in Moss Side, St Bede’s Prep School in Hulme, Alderley Edge School for Girls, The Hollins Technology College in Accrington, and The Factory Youth Zone in North Manchester.”

The sites were chosen “where gaps in digital engagement exist”, Aaron explains. This includes areas lacking “the resources to deliver cutting-edge digital training, as well as all-girl schools which have traditionally seen low uptake in technical subjects.” 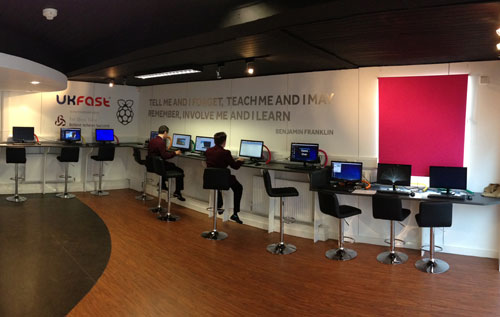 We asked Aaron how the Pi Cafés would actually operate, and it seems that’s largely up to the schools: “Some schools may use it as a creative space, others will use it as their computer science classroom as well as an extra-curricular hub and space for the community.”

The Raspberry Pi boards in question “won’t look like traditional desktop units,” Aaron tells us, “as we want them to be more computer-science focused.” For UKFast, that means “there will be arcade, old-school gaming, and robotics cases” Aaron says. “We’re providing the technology for the children in a fun and exciting way.”

Paul Grier, Network Manager at St Bede’s Prep School (one of the five new sites), adds that “in 20 years’ time, 45% of jobs will be done by AI and robots. So if kids today don’t understand [these things], they won’t understand how the world works.”

Paul says he hopes the new Pi Café will “allow both children and the staff [of St Bede’s] to delve more into computer science.” While students and staff of St Bede’s “learn ICT, which is processing and spreadsheets,” Paul tells us that “programming hasn’t taken off as much as I would have liked it to.”