Raspberry Pi co-founder Eben Upton was a key speaker at the recent Global Digital Signage Conference. One attendee had flown in from Brazil just to hear him speak. He talked about interesting concepts such as a Raspberry Pi 4K.

Host, and DailyDOOH editor Adrian Cotterill, asked about Pi sales. “We’re selling about half a million units a month, of the $35 flagship product,” replied Eben.

With about 14 million Pis shipped in the last five years, he sees more scope for industrial IoT applications than consumer IoT products. “There’s a limit to how many things you can interact with if you have a human in the loop.” Eben listed a Nest-like thermostat, lighting controller, and security system: “My house is probably never going to have more than three or four consumer IoT devices.”

However, machine-to-machine interactions offer – according to Eben – almost limitless possibilities to use a Raspberry Pi. For example, many of the screens in airports now are powered by Pi Compute Modules. 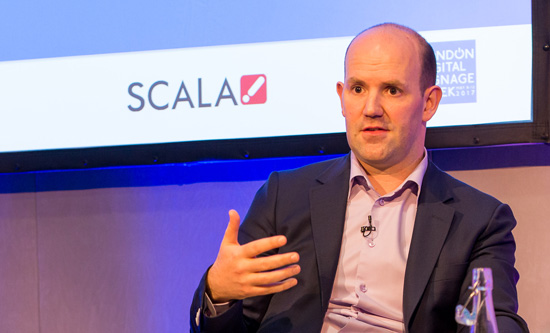 Eben sees IoT makers eventually opting for a company such as Amazon to provide an easy and robust security service. However, “I think it’s going to be a while before this stuff becomes really trustworthy.”

When will a UHD Raspberry Pi 4K come out?

Asked when we might see a Raspberry Pi capable of Ultra High Definition (4K) output, Eben said it was “forward in our minds” but dismissed the use of a separate graphics chip. “The only rationale for a second chip would be thermal… you bake in a lot of cost if you do that.” Eben estimated that “it’s probably four or five years” before we’d see a UHD Pi.