Raspberry Pi 4 has a full-chip redesign, the first in the history of Raspberry Pi, and it's unlocked new levels of performance. Our specs & benchmarks show just how much faster Raspberry Pi 4 is

Raspberry Pi 4 improves on its predecessor, with improved specifications across the board. Our Raspberry Pi 4 benchmark tests show a huge increase in performance over previous models.

It's not hard to see where this benchmark boost comes from. The brand-new BCM2711B0 system-on-chip has more powerful processing cores, the first upgrade to the graphics processor in the history of the project, and vastly improved bandwidth for both memory and external hardware.

Gone is the single-lane USB bottleneck which hampered performance on older models, and Raspberry Pi 4 shines in benchmarks as a result. 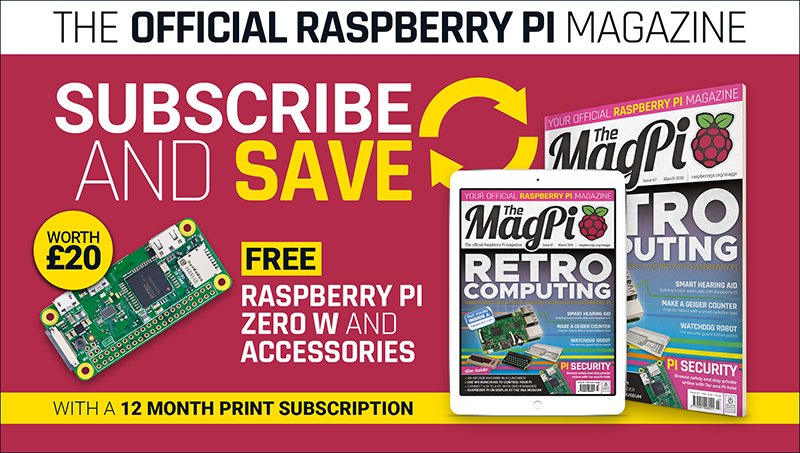 The new BCM2711B0 system-on-chip offers an impressive performance boost over its predecessors. 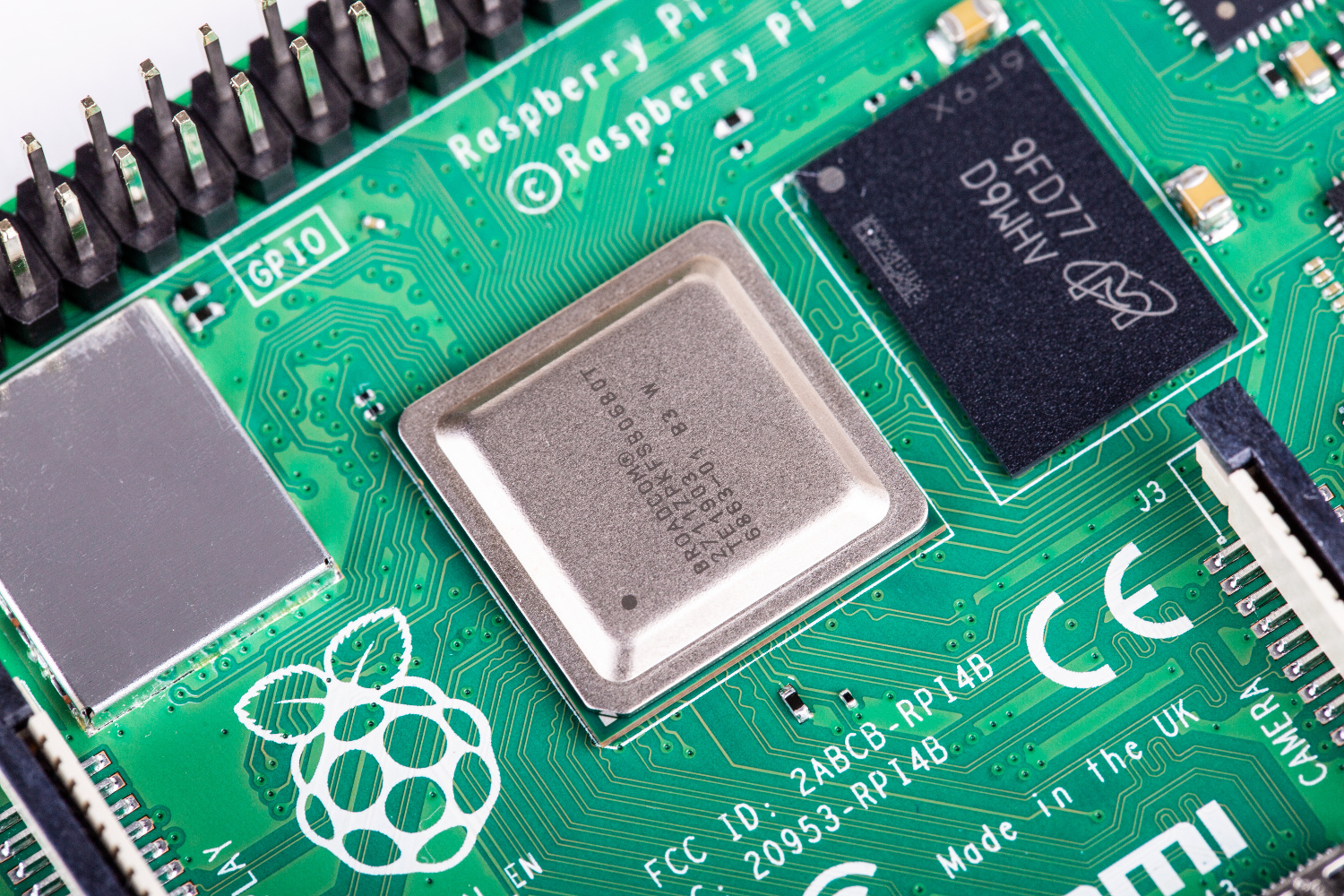 The two micro-HDMI connectors enable Raspberry Pi 4 to drive two 4K displays at up to 4Kp30, or a single display at up to 4Kp60 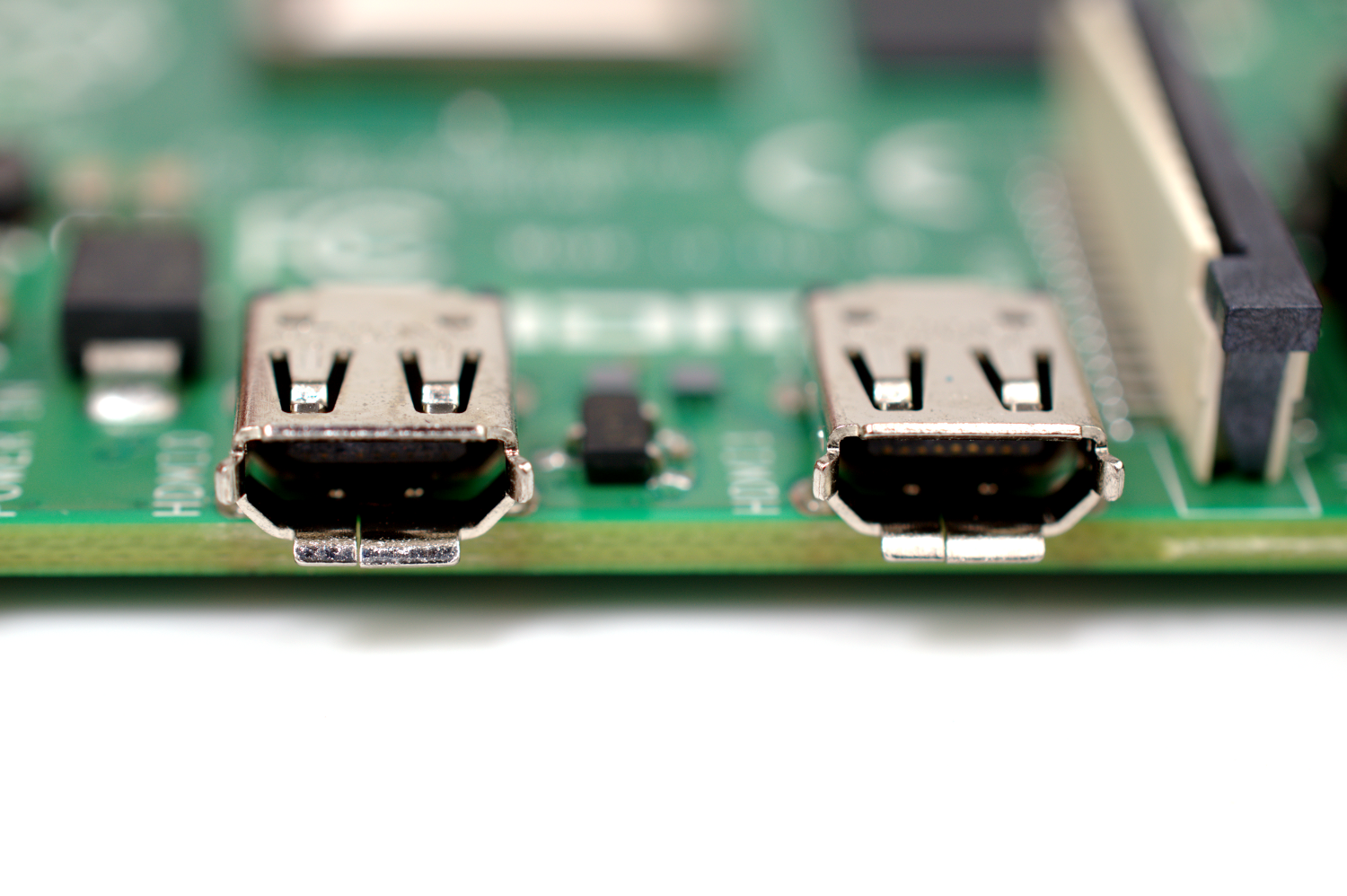 The Ethernet port, relocated to the top-right of the board, now offers full-speed network connectivity with no bottlenecks. Two USB 3.0 ports, centre, offer high-speed connectivity for external devices including storage and accelerator hardware. 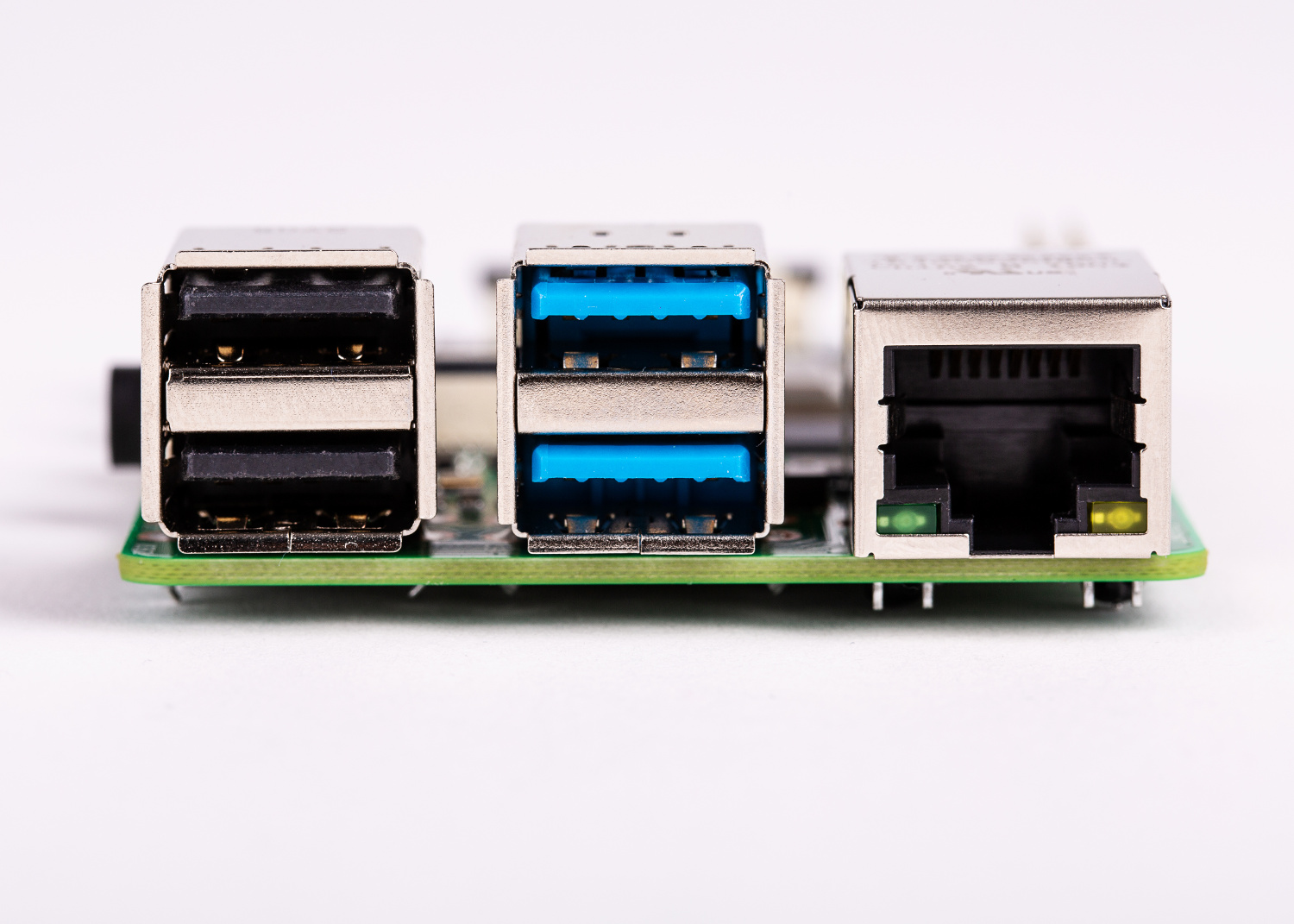 A synthetic benchmark originally developed for supercomputers, Linpack offers a glimpse at just how far the Raspberry Pi family has come. This version – ported by Roy Longbottom – comes in three variants: the fast single-precision (SP), slower double-precision (DP), and a single-precision variant accelerated using the NEON instructions available in Raspberry Pi 2 and above (NEON). 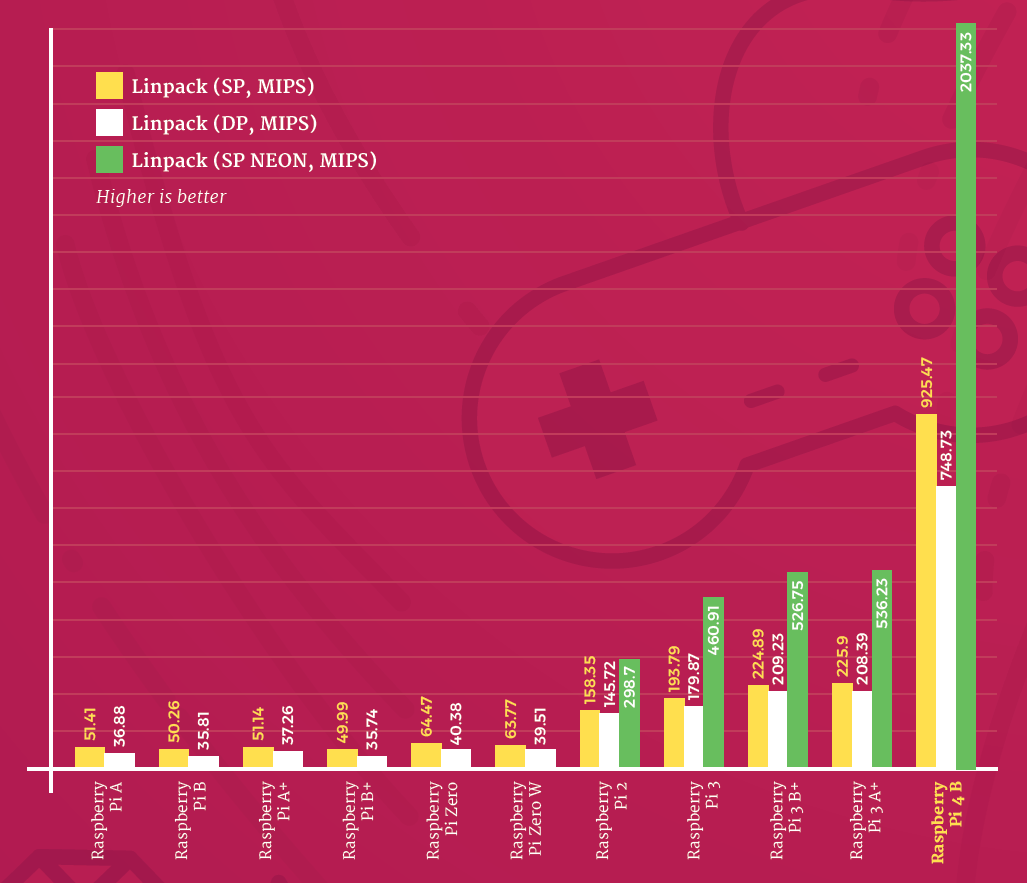 Speedometer 2.0 measures the responsiveness of the Chromium web browser by running a web application – a to-do list – and measuring how many times the application can be completed each minute. Here, performance hinges not only on CPU performance but on memory speed and capacity – the test proved too much for Raspberry Pi A+. 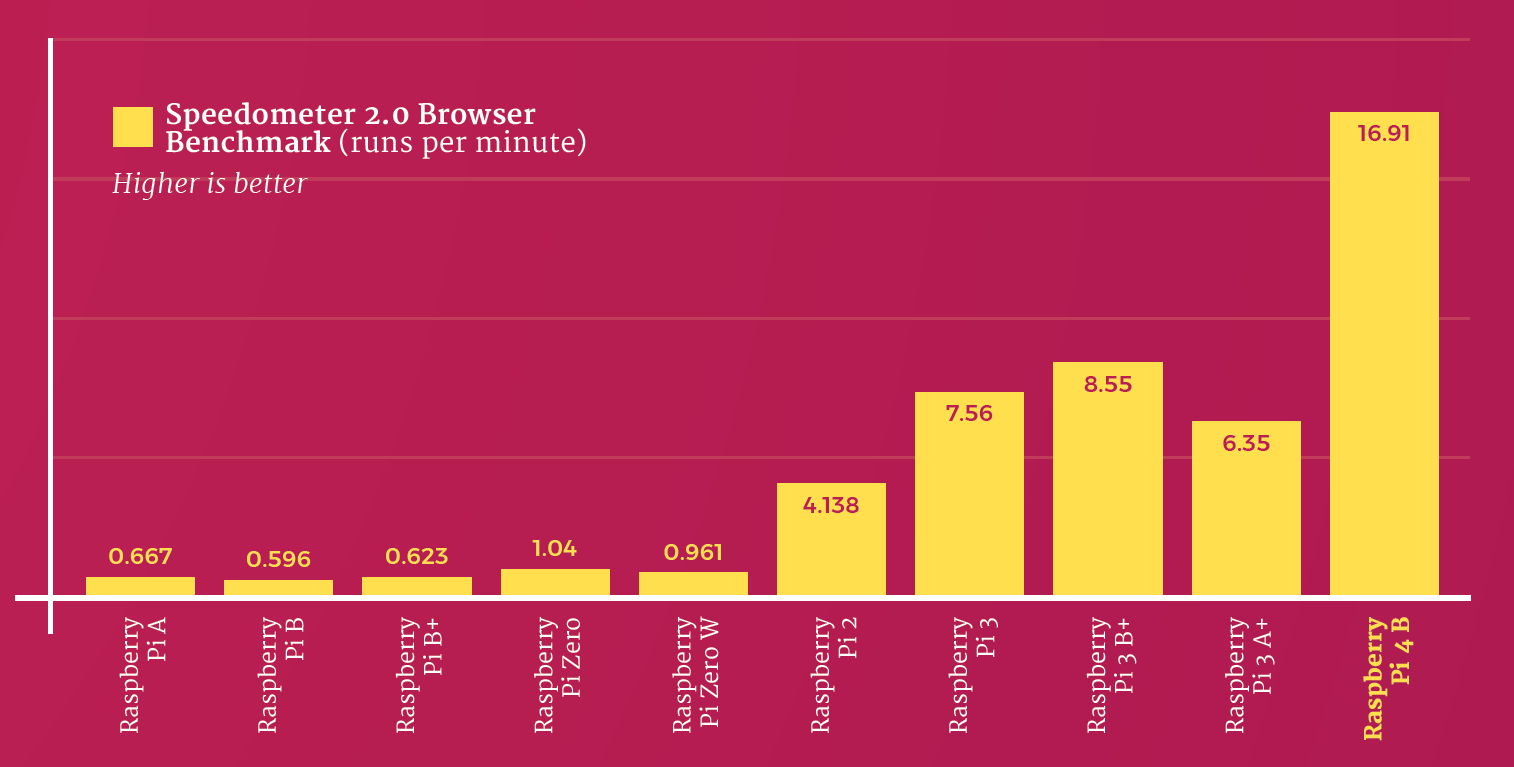 The new VideoCore VI gives Raspberry Pi 4 a significant boost over its predecessors, as demonstrated in this gaming workload test: the Quake III-based OpenArena first-person shooter runs through its built-in demo as quickly as possible at a High Definition (1280×720) resolution, while the average frame rate in frames per second (fps) is recorded. 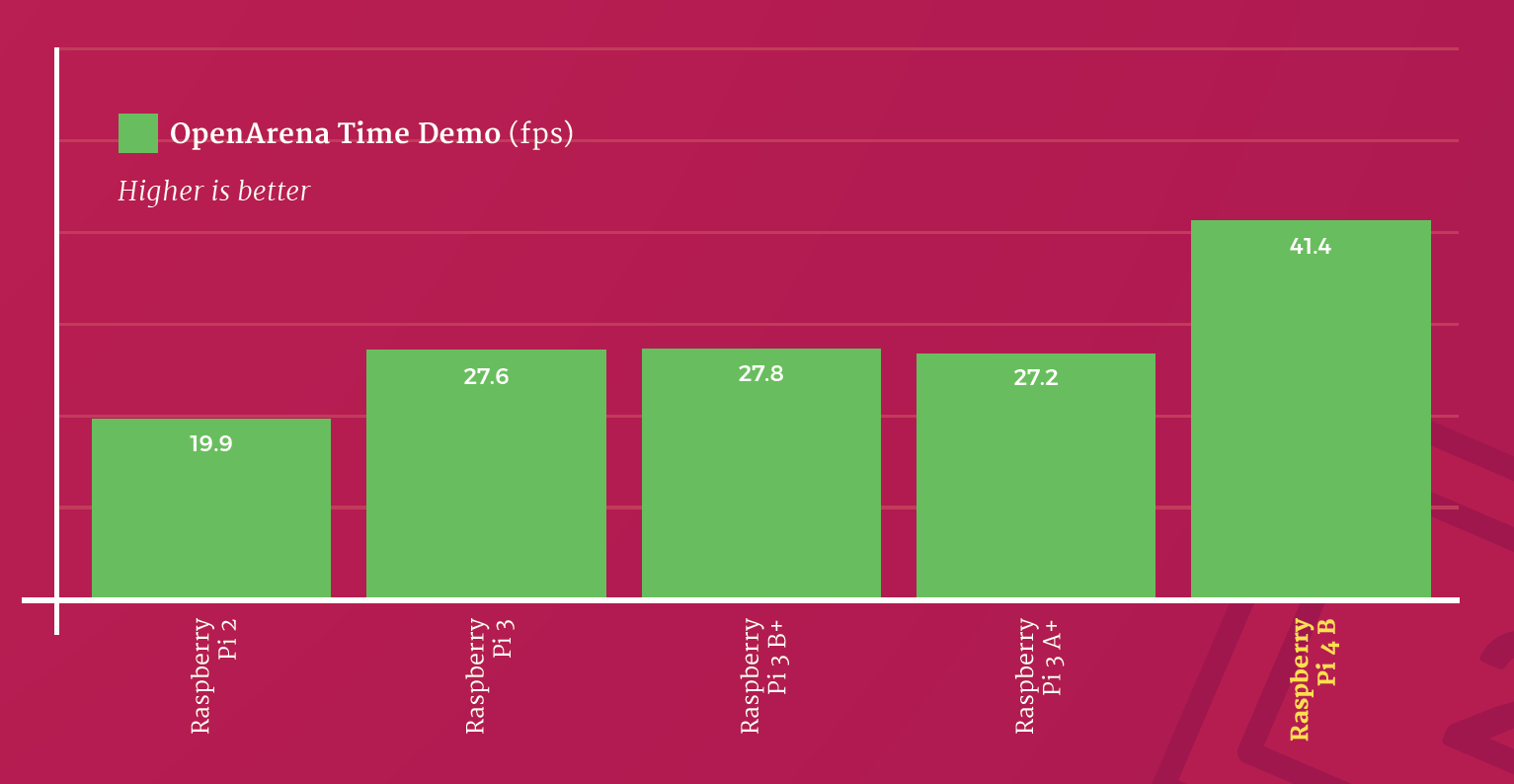 Although many workloads are primarily limited by CPU speed, others rely on memory bandwidth – the rate at which data can be written to and read from RAM. In this benchmark, the RAMspeed/SMP tool is used to measure the read and write bandwidth for 1MB blocks in megabytes per second (MBps).

Sitting somewhere between a synthetic and a real-world benchmark, here the Python GPIO Zero library is used to toggle a GPIO pin on and off as quickly as possible while a frequency counter measures the switching rate in kilohertz (kHz). This test is boosted by CPU speed. 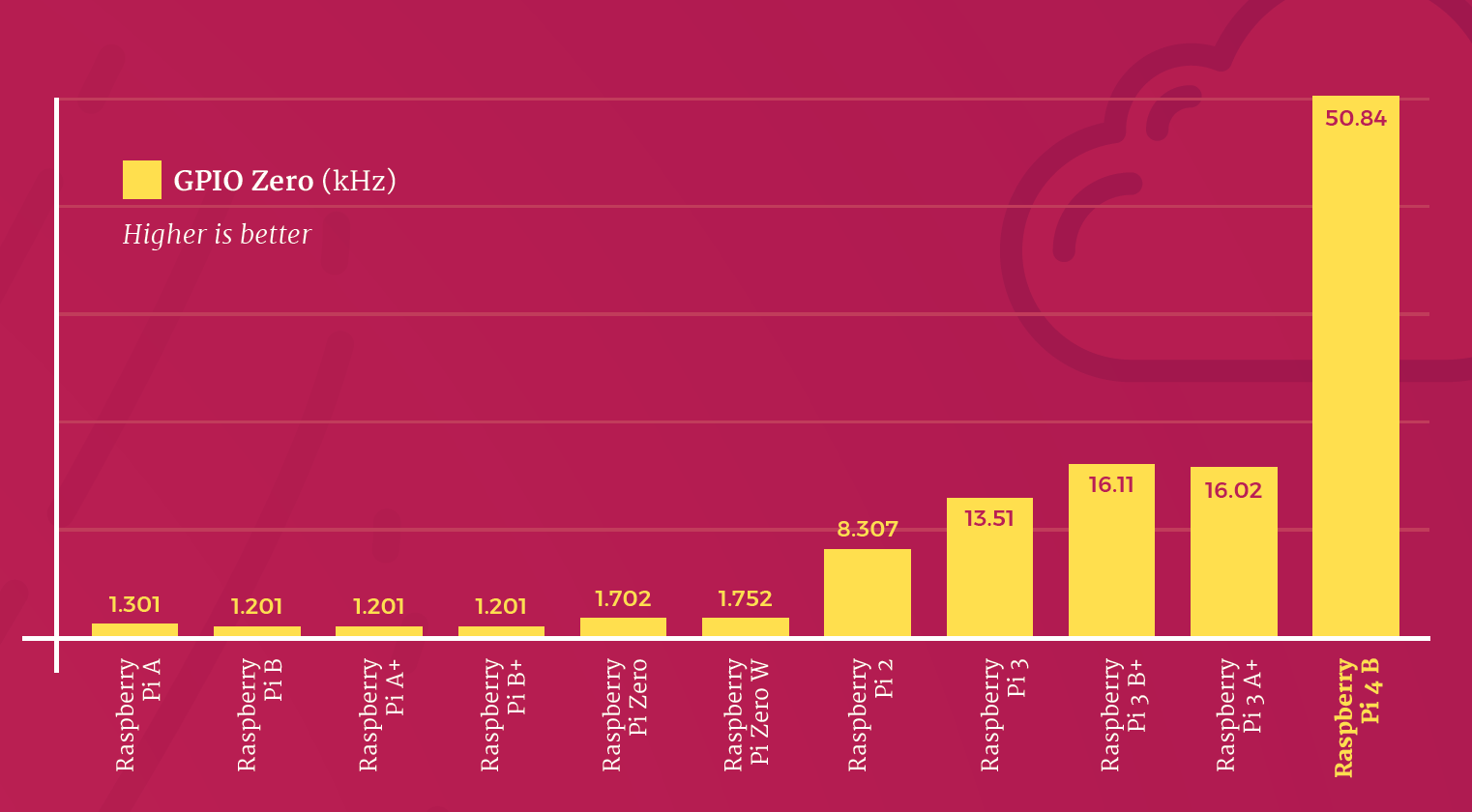 An example of a real-world workload, this benchmark takes a file and compresses it using the bzip2 algorithm and measures the elapsed time in seconds. For Raspberry Pi models with more than one processing core – the Raspberry Pi 2 and 3 family, and Raspberry Pi 4 – the test is run a second time using the multi-threaded lbzip2. 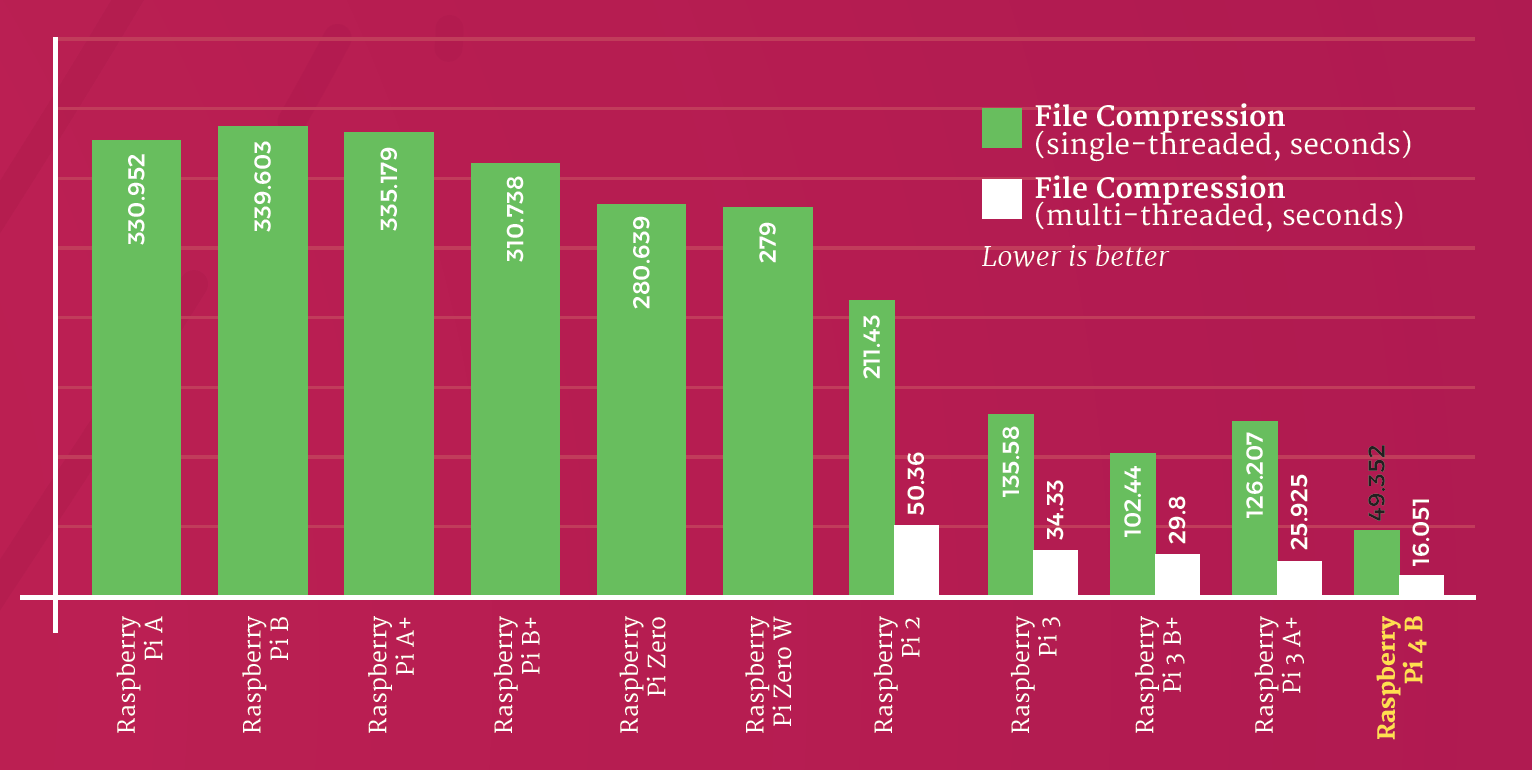 Another real-world test, the popular open-source GIMP image-editing suite is used to process a high-resolution image and save it as a PNG. Like the Speedometer 2.0 benchmark, this is heavily reliant on both CPU and memory performance – and extra memory really helps some of the models on test. 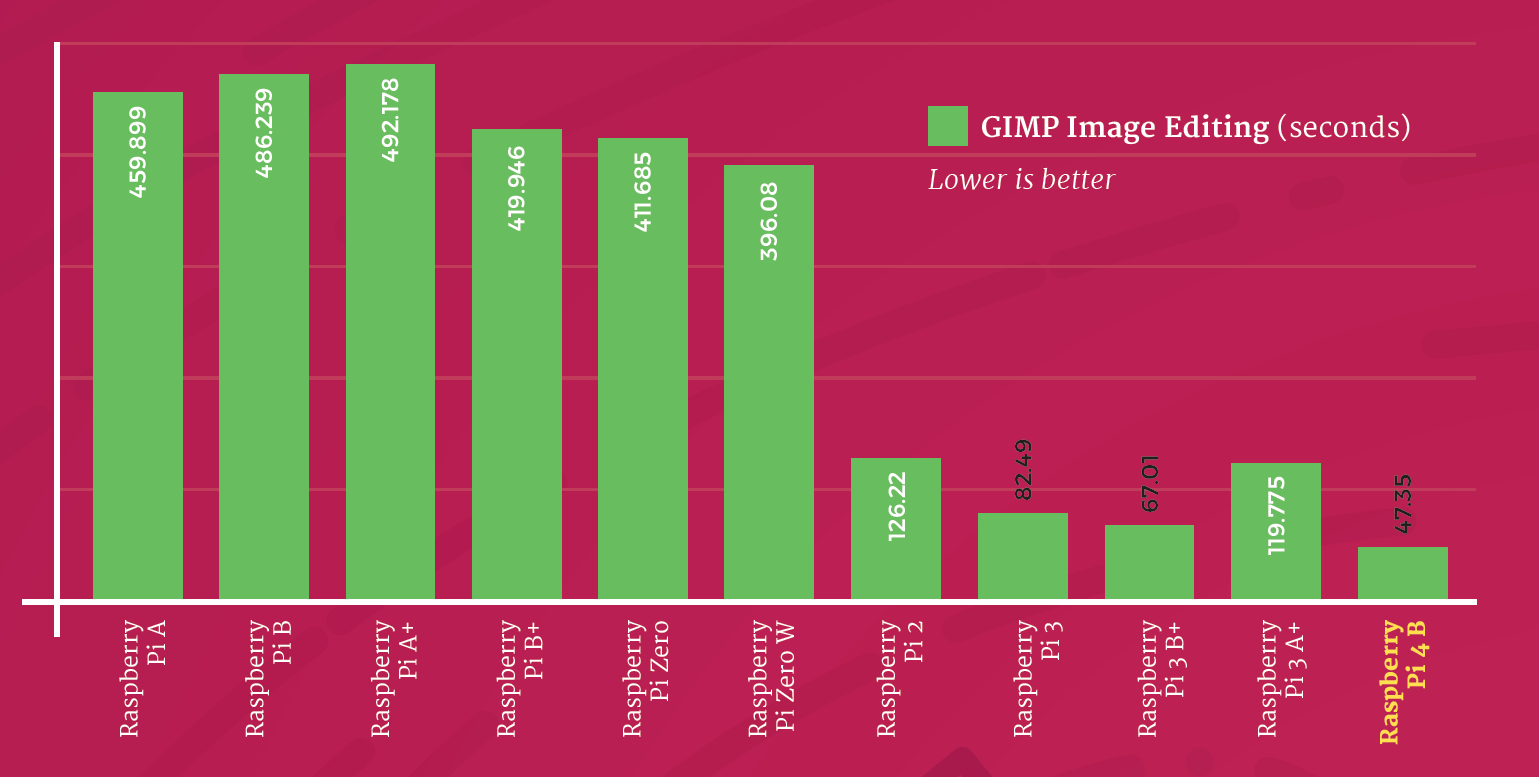 Raspberry Pi 4’s new USB 3.0 ports offer a massive bandwidth boost, which has a big impact on the performance of external storage devices. Here, a solid-state drive (SSD) is connected via a USB adapter and the average read and write throughput measured in megabytes per second (MBps).

While Raspberry Pi 3 Model B+ added Gigabit Ethernet connectivity, throughput on Raspberry Pi 4 is free from the single shared USB 2.0 channel to the SoC. The throughput of all Raspberry Pi models with a built-in Ethernet port is measured using the iperf3 tool, showing the average network throughput (in megabits per second) over several runs. 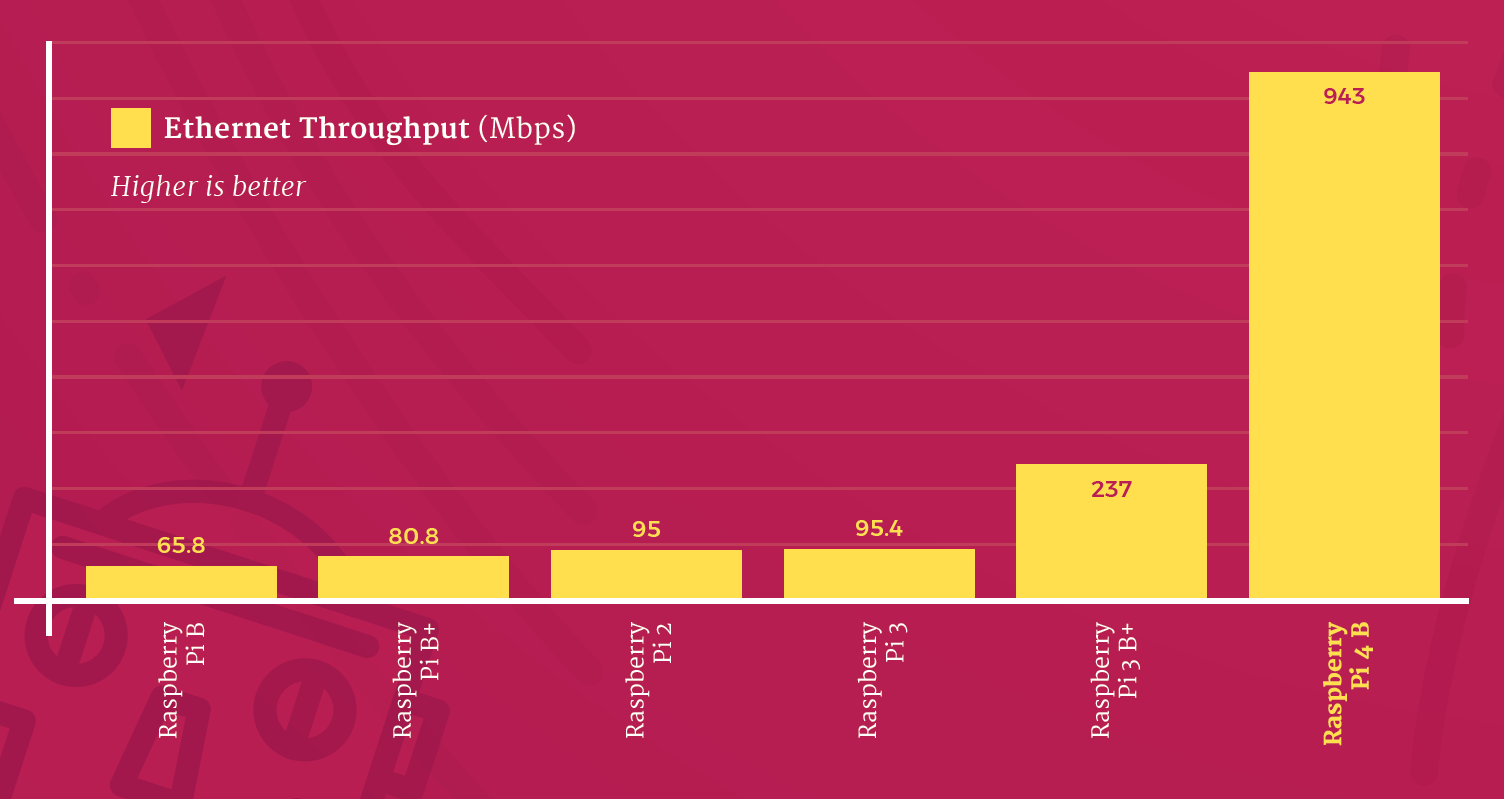 For this wireless networking test, an ideal environment is created: a Raspberry Pi is placed in line-of-sight of an 802.11ac router, and a wired laptop uses iperf3 to measure the average throughput over several runs. For models with dual-band 2.4 / 5 GHz radios, the test is run on both bands. 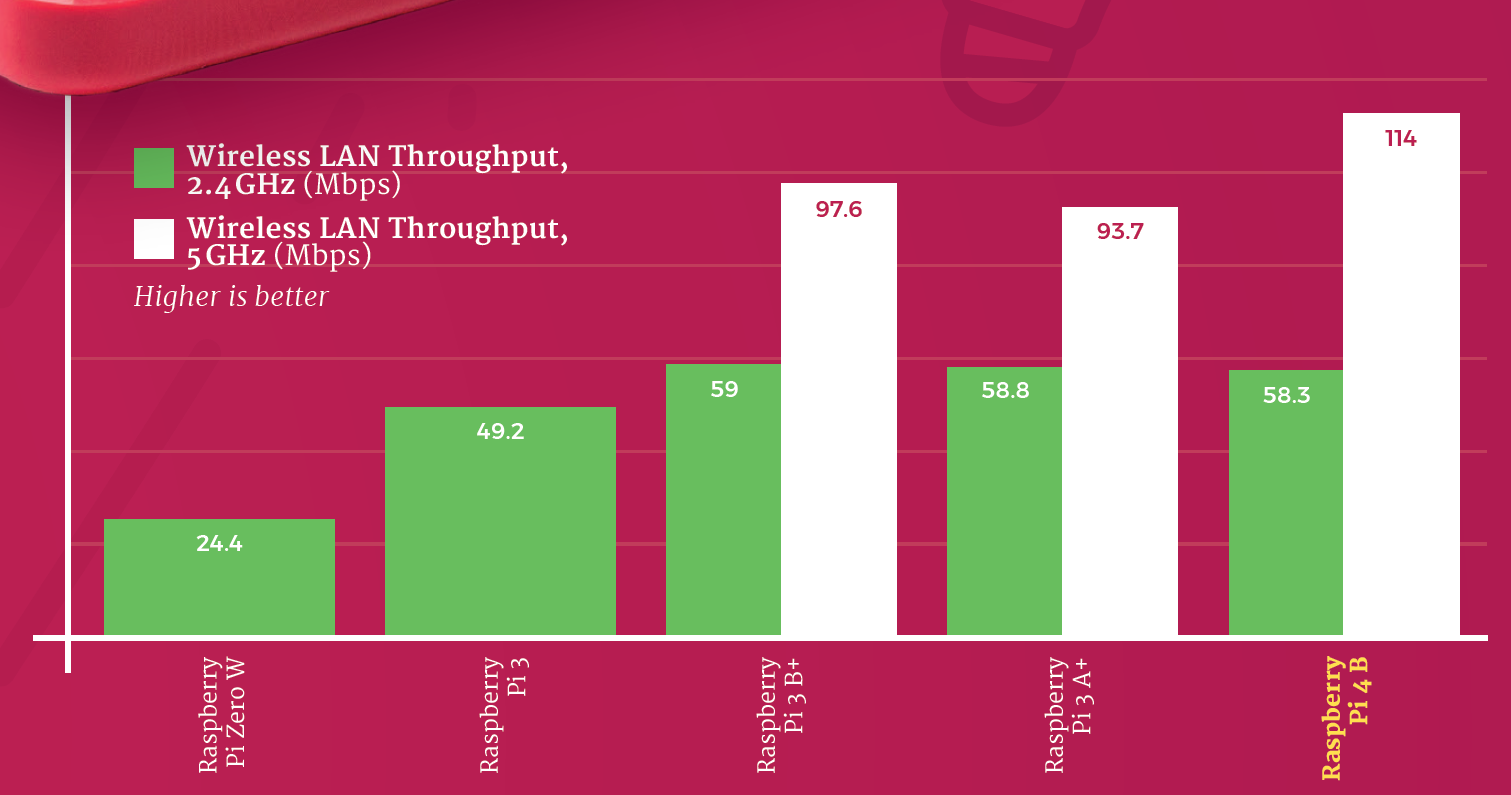 More performance typically means more power, and here each Raspberry Pi model is left running a CPU-intensive benchmark while an HDMI display and a USB keyboard and mouse are connected. The peak power draw in watts is measured from the wall, and then an ‘idle’ draw with a Raspberry Pi sat at the Raspbian desktop is measured for comparison. 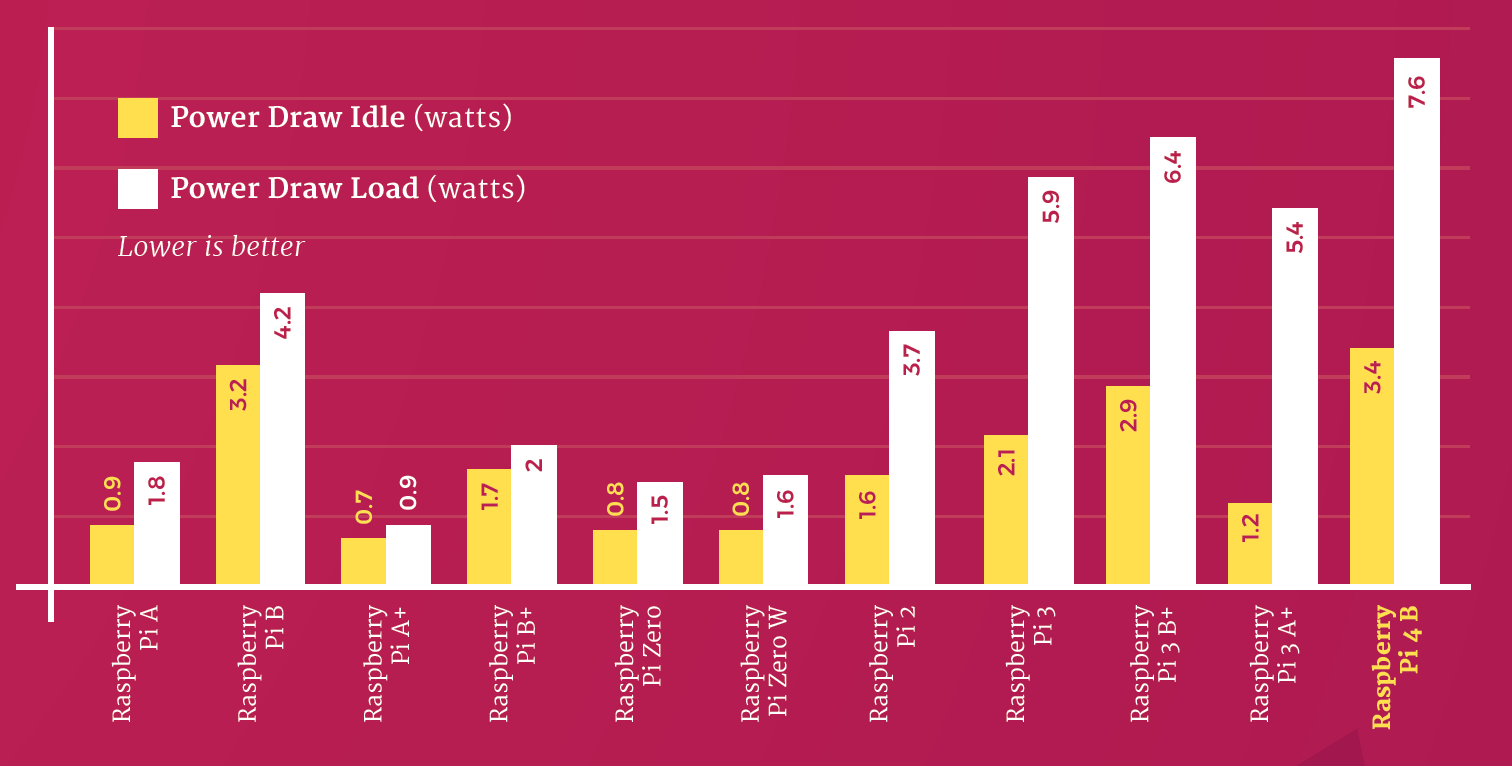 Find out where to buy Raspberry Pi 4 from the official website.

You'll be able to find these benchmarks and much more about the brand new Raspberry Pi 4 in The MagPi issue 83!