A fully functioning computer and display crammed into a mints tin

Matt Wagner first thought about fitting a computer into an Altoids tin in 2012, shortly after the launch of the original Raspberry Pi. While it wasn’t quite possible back then, the release of the considerably smaller Pi Zero changed everything, although not immediately for Matt. “I was deep into another project, and the low availability of Zeros made it challenging to find and use for anything at the time,” he recalls. “However, I now work in an environment [Micro Center store] surrounded with DIY materials, so the idea just came back to me one day.”

The result is the PiMiniMint, containing a Pi Zero connected to a 2-inch LCD display and – thanks to a RedBear IoT pHAT – equipped with WiFi and Bluetooth. “The original design took a few weeks, between prototyping and sourcing parts,” Matt tells us. “The concept of it is simple: strap together already available components. In actuality, though, sourcing parts was a bit of an issue (shipping costs, and buying pre-made parts gets very expensive), so I had to find creative ways to solve problems.”

This included a solution for rechargeable battery power. “In my first iteration, I had no way to charge the battery,” explains Matt. “An Adafruit PowerBoost would have been ideal, as it puts out enough amperage, but the cost would have been tight for me. The [Pimoroni] Zero LiPo is amazing, and I am currently using it in an ongoing project of mine; however, it sits too high on the GPIO and wouldn’t allow for the lid to close with the screen inside.”

In the end, at the suggestion of a co-worker, Matt opted to modify a standard USB phone charger, extracting its charging circuitry to use with a slimline LiPo battery. He also added an on/off switch. “I had some issues regarding wiring and power needs, but those were related to where in the circuitry I put my switch, and the kind of switch I used,” he reveals. “Changing to a better switch did the trick.” Matt’s 2500mAh LiPo provides impressive battery life: “I haven’t done a full 100%-0% test and timed it, but I have had it on for six-plus hours at a time.”

One drawback of using a built-in battery was that there was no longer room in the tin for the infrared camera and full-size exterior USB port featured in the original design. “However, I do still have an interior full-size USB [via an adapter] that is available when opened.”

Matt is currently making a second PiMiniMint for a friend, featuring a few modifications: “His is going to have two on-board WiFi antennas and a dedicated SIM for transmitting data over 3G/4G.”

As well as it being a cool pocket PC, Matt thinks the PiMiniMint is ideal for portable retro gaming. “Additionally, I have used it as a WiFi access point for saving files to, a WiFi repeater by plugging a second WiFi antenna into the USB port, and I’m sure there are more ideas out there!” 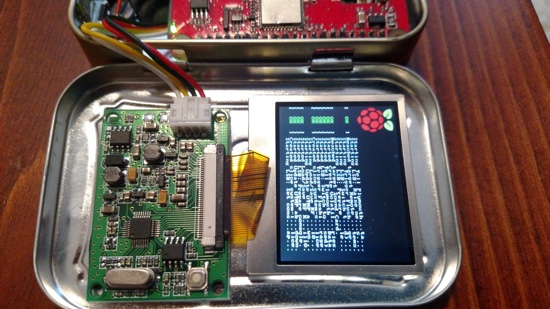 The 2-inch screen is attached to the lid of the Altoids tin using double-sided tape. The display board’s white charge port needs to be near the hinge to avoid stretching the wires. 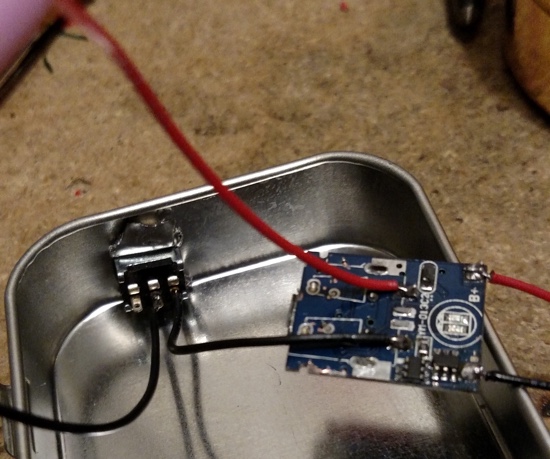 Matt stripped the mini circuit board from a standard phone charger and removed its USB port. This board is then soldered to a slimline LiPo battery, and connected via a switch to the Pi Zero. 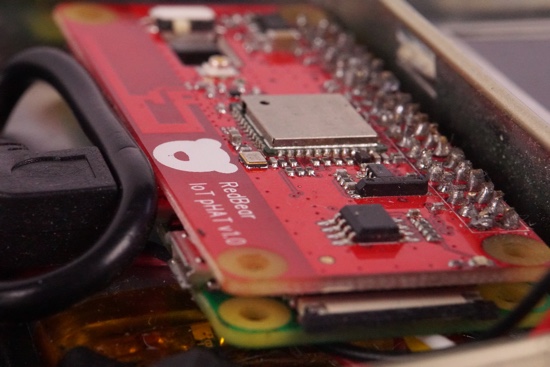 A headerless RedBear IoT pHAT is soldered directly via a male 40-pin header to the Pi Zero to provide WiFi and Bluetooth connectivity. If using the new Pi Zero W, this could be omitted.