Turn a Raspberry Pi into a blinktastic classic 1970s computer? PJ Evans puts on his Paisley shirt and heats his soldering iron.

The launch of Digital’s PDP-8 minicomputer in the 1960s was a defining moment in computing history, laying down the foundations of the hardware and software architectures we use today. Both it and the later PDP-11 were not only powerful machines, but also beautifully designed objects.

Oscar Vermeulen, an admirer of PDP range, has sold over 2,000 of his PiDP-8 replica: a Raspberry Pi-powered emulator with a fully functional one-third scale front-panel. Now comes his PiDP-11 kit. Released in 1970, the original PDP-11 is the most successful ‘mini’ computer in history, with over 600,000 sold.

For this new kit, a painstaking process has resulted in an injection-moulded replica of the original PDP-11’s case. If not for the one-third scale, you would struggle to tell it apart from the real thing. A perfect facia and custom-built switchgear complete the package. You even get a key and lock, just like the real thing.

Once built, the PiDP-11 PCB comprises 64 LEDs, two rotary encoders, and an array of switches that connect to the Pi’s GPIO. Running a special version of the SimH emulator, the Pi accurately handles input and output from the panel. You can hook up a screen if you wish, use SSH, or go old-school and implement RS-232. The back panel is provided with different cut-outs to suit your cabling. 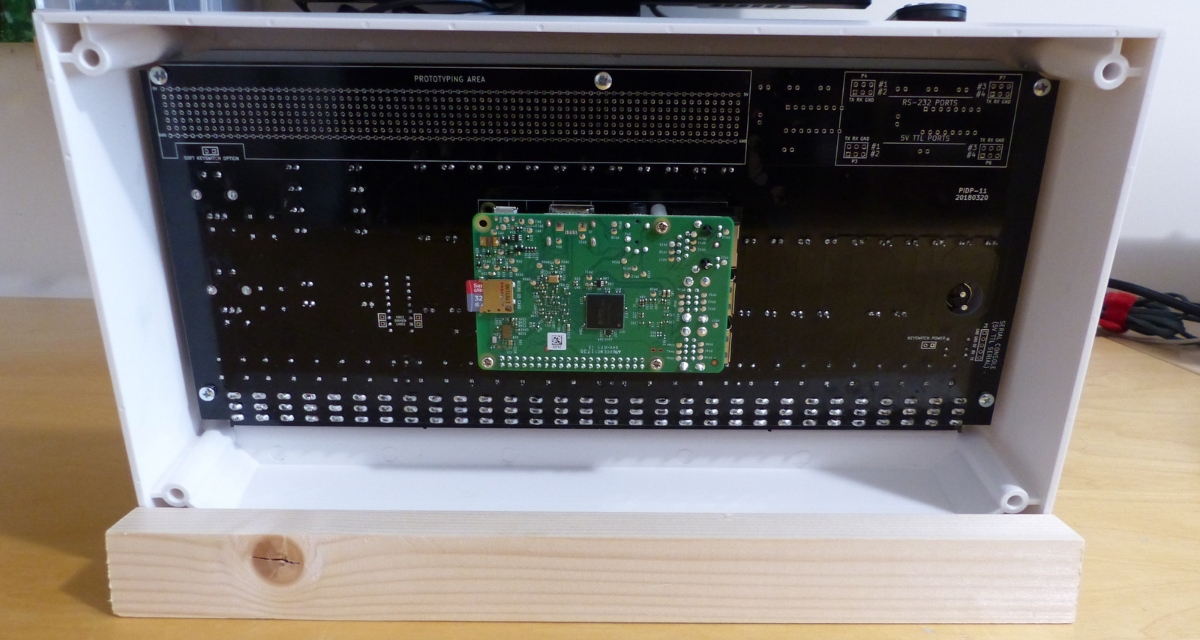 The PiDP-11 is supplied in kit form and there’s a lot to do. You’ll need to have some experience in soldering to put this together, the focus being on accurately fitting the switches and LEDs. This is tricky, but Oscar has provided jigs that make the alignment of all these components much easier than with the PiDP-8. The instructions are in an alpha stage, but they are clear and the switch section is especially detailed. It took us about five hours to complete.

"An essential purchase for anyone with an interest in computing history"

Full instructions are provided on how to prepare the Pi for its new career in 1970s computing. At the time of publication, a one-stop SD card image should be available. Otherwise, there are a few hoops to jump through, but nothing too arcane and the steps are well explained.

Once you log in, you’re straight into the PDP‑11’s operating system, an early form of UNIX. A number of alternative OSes are available, with more promised soon. You can switch back to Raspbian any time you like. In fact, as SimH doesn’t put a lot of strain on the Pi, it is unlikely to struggle with other server tasks. As a result, many users have their PiDPs doubling up as file or media servers.

These kits are a labour of love for Oscar and the attention to detail shines through, from the quality of the casing to the extensive labelling on the PCB. You many find the price high, but the quality is there to match. An essential purchase for anyone with an interest in computing history.

The PiDP-11 ticks all the boxes. It’s straightforward to build, beautifully cased, and is endlessly customisable. Whether you’re interested in early computing or hypnotic flashing lights, you’ll be delighted.

This story first featured in The MagPi issue #77 and was written by PJ Evans. Interested in regular updates from the world of Raspberry Pi? Become a subscriber.