Over 100 teams have signed up for Pi Wars 2018: the competition based on Raspberry Pi robots.

The new rules and challenges for Pi Wars 2018 have been revealed, so we caught up with co-founder and co-organiser Mike Horne to see what’s new for the next Wars.

Pi Wars 2018: one robot; many challenges

Teams entering Pi Wars must build a single robot that can tackle a range of challenges, including an obstacle course, a straight-line speed test, and an event called ‘Slightly Deranged Golf’.

Two events from last year – Skittles and Line-Following – have been replaced by the Duck Shoot and Somewhere Over the Rainbow. Mike explains that they decided in their second year to always attempt to have updated challenges so that returning teams “couldn’t just bring out the same old robot!”

Duck Shoot pits robots against a line of duck targets, knocking them over by either pushing balls or firing projectiles. Mike tells us, “We’re expecting a lot of people will leave this one to the last minute [to design for] – not a good idea!”

Somewhere Over the Rainbow has been introduced based on feedback for a vision-based challenge. The robot must visit the corners of a square arena in order of colour. 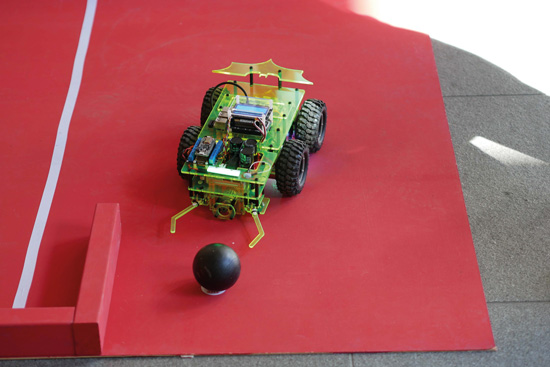 Some returning challenges have updated rules. “The straight-line speed test will have narrowed sections that will test how straight the robots are travelling”, Mike reveals, while “the Minimal Maze is being made slightly easier by allowing six temporary targets to be added.”

The challenge was just too tough last year. The tee area of the Slightly Deranged Golf course will also be lowered, with a smoother slope, to help robots complete the course.

Awards will still be given for artistic and technical merit, as well as blogging skills leading up to the event. Mike says, “We’re considering other awards – such as the Funniest Robot, from last year.”

You can read the full challenge list and rules for Pi Wars 2018 on the Pi Wars website.

Mike confirmed that more than one hundred teams have applied for 2018’s Wars, and that “the quality of the applications, and the amount of detail they’ve given, is much higher this year.” It sounds as if 2018 is going to be fiercely competitive.

Pi Wars 2018 takes place in the William Gates Building of the Cambridge Computer Laboratory, from 21 to 22 April.

We talked to Pi Wars veteran Brian Corteil to get his take on 2018’s design challenges. Asked whether the new challenges require specific designs, Brian says gave us the following tips: