Pi Wars is one of the biggest events in the Raspberry Pi community calendar. This year's event, in Cambridge UK, is getting ready to take place on Saturday 20 April.

What is Pi Wars?

To celebrate this renaissance of robotics, the organisers of the regular CamJam event hold a yearly contest known as Pi Wars that pits the Raspberry Pi community’s best automated efforts against each other. There’s no fighting, though: the robots take part in devious challenges designed to test how well they’ve been built and programmed, and at the end of the day they get to be taken home in one piece! Most of the time.

How to win Pi Wars

This year, over 70 teams are taking part over two days. Here’s what you can expect from the event. 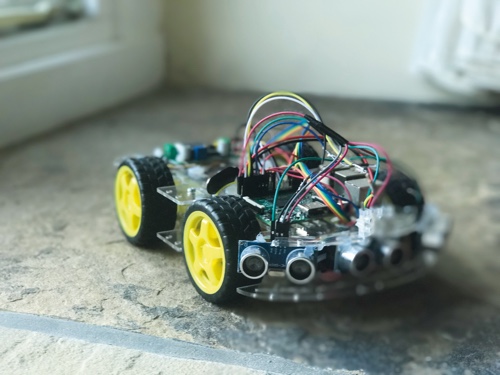 Straight-line Speed Test: How fast can your robot go in a straight line?

A shallow trough 7.3 m (24 feet) long comprises the course for the speed test. Your robot needs to traverse this course autonomously as fast as possible, without hitting the sides. The course is usually 534 mm wide, but there are sections where it will narrow.

With a white line down the centre which you can use for navigation, the course will be run three times and the scores for each run added together. While it seems like it will be simple, any robot maker knows that very few robots go in a straight line without some coding help.

Official tip: It’s important to get a balance between being as fast as possible and being as accurate as possible – we’ve added chicanes which count as ‘walls’ which incur penalties when touched.

Don’t let this simple-looking maze fool you: this can be quite tricky for robots as you’re not allowed to help them, and they’re not permitted to touch any walls.

The concept behind this maze is for your robot to sense the different colours that are painted on the wall to inform how it navigates. Programming your robot to turn while seeing certain colours, and only moving so much at a time, is key to navigating the maze successfully. While slow and steady can win the race, the event is measured on completion time, so don’t dawdle.

Official tip: There are so many ways to do this, but we’ve allowed the addition of ‘markers’ on the course which might be an easy way to orientate yourself if you use ‘vision’ to navigate. 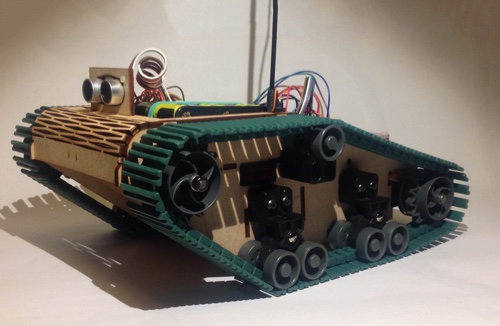 Somewhere Over the Rainbow: Your robot needs to find and touch a series of coloured balls, preferably in sequence

Robots are placed at the centre of a square arena in this new challenge. The wooden arena measures 122 cm by 122 cm, and the black walls are 300 mm high. At each corner there’s a coloured ball suspended 100 mm off the floor of the box. Your robot must visit each ball once, and they can do that in any order, or shoot for more points and go in the predetermined order of Red, Blue, Yellow, and Green.

The kicker? Each ball’s placement will be random for each team, so the robot truly has to look for the correct colour. Contestants have seven minutes to perform a maximum of three attempts, with their fastest attempt used for scoring.

Official tip: We’re supplying a calibration or ‘try out’ course in addition to the ‘real’ course – use it to get your sensors in shape before the real runs. 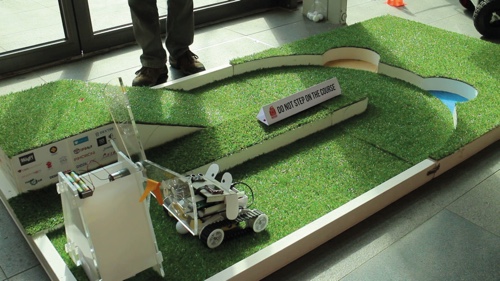 Slightly Deranged Golf: Your robot must push a golf ball through a devious course to the hole

Think mini golf in this excellent challenge that showcases your robot’s dexterity and your team’s ability to precisely control it. A real golf ball must be pushed around a golf course, avoiding obstacles, and dropped into the hole at the end.

You can’t carry the ball, and the ball is only allowed to leave the surface of the course if the team/robot decides to chip the ball. Otherwise, pushing and hitting the ball is the way to go. Teams can’t be cheeky and ‘capture’ the ball with the robot either. The total time after three runs will be used in scoring.

Official tip: We’ve lowered the tee this year, so it should be easier, but get control of the ball early! 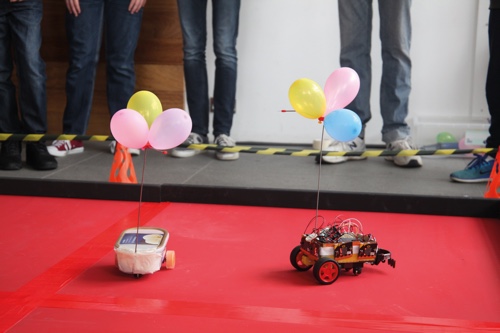 An audience-favourite challenge that somewhat resembles the battle mode from Mario Kart. Each robot is equipped with a series of tiny balloons, along with a needle. The aim is to pop your opponent’s balloons with your needle, and not have your own popped.

Each duel lasts three minutes. There are many rules, such as ‘don’t spin’ and ‘don’t purposefully damage the opponent’, which are mainly in place to reinforce that this is supposed to be a fun event that you shouldn’t try and game by being silly. Remember, judges’ decisions are final.

Official tip: Practise remote-controlling your robot as much as possible, as control is vital in this challenge. 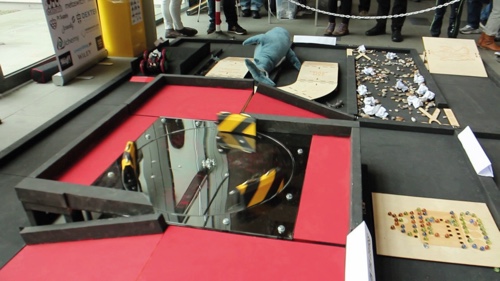 The Obstacle Course: Navigate an obstacle course in the fastest time

The obstacle course is a lot of fun… to watch. Robots regularly get a bit stuck and teams usually get a bit frustrated, which makes for great drama. It should be televised really.

While the exact layout of the obstacle course is a mystery until the day, in the past there have been ramps, marbles, sharks, and The Big Whirling Circle™ to contend with. Contestants need to figure out the best way to tackle each obstacle, and hopefully prepare their robot for any eventuality. You only get one attempt, and you’ll be judged on how fast you complete the course. Although don’t just try to charge through obstacles.

Official tip: Without giving too much away, make sure you can get out of tight spots, maintain control, and practise slow turns. Grippy wheels will help this year, too.

Robots will be placed in front of the targets, and will not be allowed to cross a boundary line that is at least a metre away from the targets. Several targets will be presented between 10 and 15 cm in height, held at different elevations, and not all at the same distance from the boundary.

Robots can either use five supplied balls to knock down the targets, or use a pre-installed cannon that fires up to five soft projectiles (such as Nerf darts). Any method of aiming is allowed (including laser pointer). Contestants have five minutes to make three attempts, and points will be tallied up depending on how many targets are hit.

Official tip: You only have five shots, so be as accurate as possible and take your time to line up.

Other ways to win in Pi Wars

While completing challenges is the main way to gain points, robots will also be judged on other aspects…

The History of Pi Wars:

Pi Wars is a spin-off from the CamJam – the Cambridge Raspberry Jam. Now in its fourth year, the competition has grown in size and scope, as challenges and team categories are added or updated so that the contestants can get a truly fair test of their skills against their peers.
Michael Horne, CamJam and Pi Wars organiser, tells us a little bit about the history of the event… 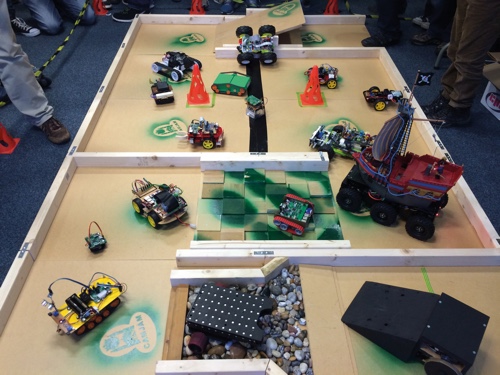 This competition, in December 2014, was our first, and was held at CamJam’s previous regular home at the Institute of Astronomy. The courses were a little low-tech – unpainted hardboard, courses on table tops, and a line-follower course made out of paper taped together. It took place over just one day and we split robots based on cost – sub-£75 and over-£75 (not including the Raspberry Pi). Challenges were as follows: Obstacle Course, Line Follower, Proximity Alert (get as close as possible to a wall), Robot Golf (push a ball through a hole in a wall), Straight Line Speed Test, Sumo Battle, and the fiendish Three Point Turn which was an autonomous test of a robot’s ability to drive forward, make a turn in the road, and then return to its starting position. 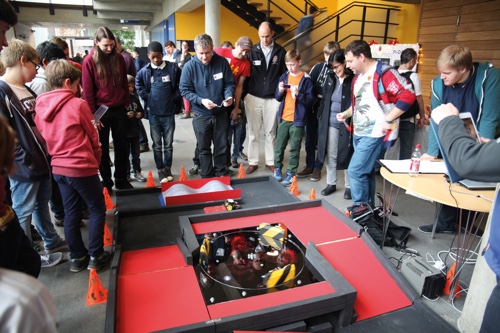 The 2015 competition was also held in December and we moved venue, to the Cambridge Computer Laboratory (William Gates Building), to give us some more space to work with. The courses were much better presented – featuring actual paint! – and we changed some of them to keep things fresh. The challenges were: Obstacle Course (with different obstacles and featuring the brand new turntable, designed and created by PiBorg), Skittles (knock the pins over with a ball), Pi Noon (robot vs robot balloon popping), Straight Line Speed Test, Three Point Turn, Line Follower, and Proximity Alert. This time, robots were split between those under A4 size and those between A4 and A3 size. This increased size gave us some challenges as the courses needed to allow for larger robots. 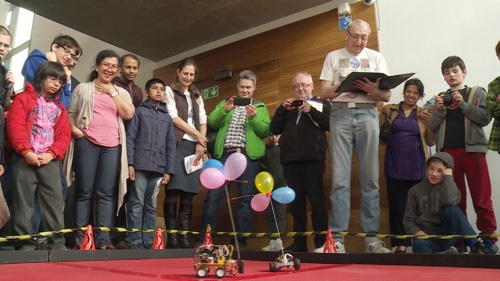 For 2017, we decided to move the event to April to allow schools, in particular, more time to work on their robots and to avoid exams. We also decided to hold the event over two days, with schools taking centre stage on the first day and everyone else being divided into three categories on the Sunday: Beginners, Intermediates, and Advanced. We were welcomed back to the Cambridge Computer Lab and this was the busiest event yet with around 60 robot teams competing.

The challenges were once again revised: Straight Line Speed Test (which was changed to a strictly autonomous event), the Minimal Maze (a new autonomous course), Line Following (which used the outline of our robot logo – much to the dismay of many teams!), Pi Noon (which added another two balloons as targets to be popped), Obstacle Course (which doubled in size from previous years), Skittles (this time, teams had to go and ‘collect’ the ball to be rolled at the pins – a slight misstep on our part as it proved to be a very tricky physical challenge!), and Slightly Deranged Golf (in which a real golf ball had to be moved around a short course and through a windmill’s rotating sails at the end and into a hole).