A laptop built from a Raspberry Pi and crafted yourself. Is it too limited by the Pi, or is it a great little portable teaching tool?

It’s really not that old, but do you remember the One Laptop Per Child (OLPC) project? It's a cheap laptop with yesteryear’s components, created specifically to try to make getting computing into the poorest of developing nations as easy as possible. It was also originally very green, and we don’t mean ecologically - although it's also quite low-powered, so it technically is ‘green’ in that sense. When we got the pi-top out of its box, that was the first thing that came into our minds, but definitely not in a bad way!

The full article can be found in The MagPi 40, out on 26 November

The elevator pitch for the pi-top is that it’s a crowdfunded laptop kit that the user needs to assemble, which is powered by an included Raspberry Pi. There’s a lot more to it, though, and we’ll get into that shortly, but already this gives you a basic impression of what we’re dealing with. 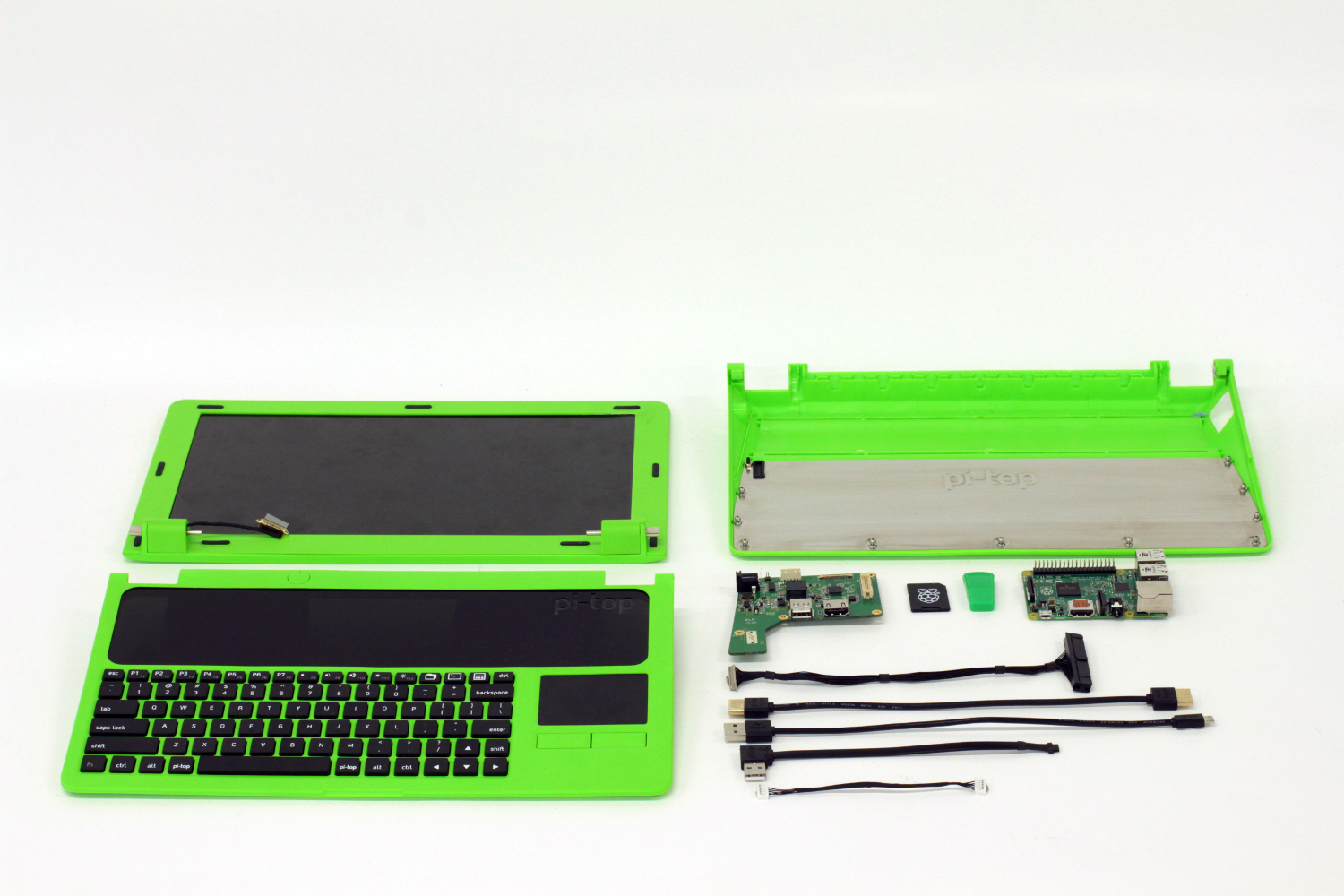 Brush away those first impressions

The pi-top has a big educational focus built into it. Each pi-top user has to create a cloud account before logging in, which then syncs settings and such to this account. It also syncs data from CEED Universe, the gamified learning software that is custom-made to meet the new GCSE curriculum. This, on top of the usual Raspberry Pi teaching resources, gives it an edge in the classroom, as students can use whatever pi-top they want without having to carry too much in the way of data around with them.

It sounds great in theory. Let’s first go back to the box opening, though, before we start discussing its other merits. The box itself is lovely, with the first thing you see being the detached laptop screen’s bright green back with the pi-top logo in it. All the parts are stored in layers, carefully packed with a soft foam. You’ll have to look carefully to find the laser-cut removable circuit cover and the selection of required screws and cables, but they’re all there.

The instructions, and indeed the assembly, are quite simple. There are three main parts of the laptop chassis, and only two pieces of circuit board including the Raspberry Pi, so the majority of the process is preparing and fitting the parts together. While the instructions are generally good, they don’t distinguish very well between the two types of screws. Hint: the screws that look like motherboard spacers need to be affixed to the PCBs; they have a thread running down the centre of the head. Also, one of the connection orientations is not completely clear. We found ourselves having to take it apart a bit so we could reconstruct it properly at one point.

Otherwise, assembly was quite quick. We stuck on Netflix and after a couple of episodes of BoJack Horseman it was ready to boot up, so less than an hour and probably quicker without giggling every minute. Make sure all the ports and cables are properly connected and you can turn it on for the first time.

It’s quick and easy to set up an account the first time, and you get some choices as to what software you want to be able to quick-launch from the panel. The pi‑topOS is a custom interface built on top of Raspbian Wheezy that has a different offering of default software, albeit with full access to the standard packages you can get on Raspbian anyway. The interface is roughly the same as normal Raspbian’s, but with the panel down at the bottom and a bit more of an OS X vibe with some of the display characteristics. It looks great and works absolutely fine, thanks to the extra oomph of the Pi 2’s processor; the only issue we had was that the Chromium browser selected by default is still a little too slow.

The CEED Universe, currently in early alpha at the time of writing, is quite interesting. Taking the resource-gathering and building elements from Minecraft, and applying them to a top-down aesthetic from early nineties PC games as a way to teach coding and physical computing, is fairly unique. Players are asked to perform Python coding tasks as part of the game, starting off with something akin to Hello World. It’s very gamified, and the final version could be really something if done right.

The pi-top, then, is a great piece of kit. While it’s probably not going to replace a normal laptop in a similar price range, it’s an excellent educational tool. It’s also a portable Raspberry Pi with a ten-hour lifespan, which is pretty great on its own. Hopefully, it will make its way into classrooms or into the hands of budding young coders.

Makes great use of the Raspberry Pi to create a fully functional laptop that you build with your own hands – the entire system is a great experience for those wanting to learn.