Sound artist Frazer Merrick has developed a set of interactive wind chimes to take you away from it all. Nicola King tunes in to find out more

The Perpetual Chimes project is very clever – a set of augmented wind chimes which, since they are indoors, require the user to interact with them in order to create an escapist soundscape played through headphones.

Frazer Merrick, a sound artist and educator, Frazer enjoys circuit bending, field recording, and physical computing. He came up with the idea for the chimes while experimenting with ways of creating interactive musical instruments, and exploring how sounds can transform a space. “At the time I was really interested in escapism,” he recalls, “so I knew I wanted to make a headphone-based interactive installation that captivated the player/listener – something that didn’t make much acoustic sound, but instead something just for the player.” 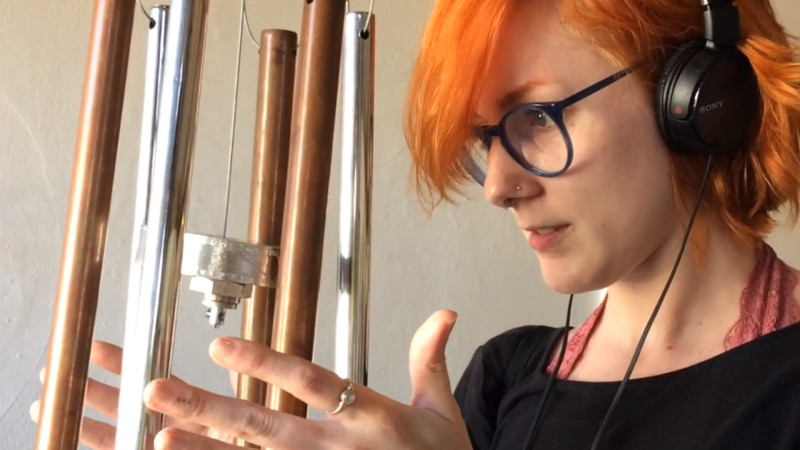 Frazer initiated the idea back in 2016, creating a prototype where the chimes were suspended from a brake disc hanging from a mic stand. Keen to improve on this first version, Frazer and a collaborator from @LimboEducation began work again in 2018 to revive and improve the project: “We set to work making it far more robust and, importantly, standalone.”

The sound of music

So, how do the chimes work? Frazer explains, “When you hit one of the chimes, it strikes a disc in the middle. Both these elements are connected to a Makey Makey (the central disc being ‘earth’), which then triggers a key press on [the project’s] Raspberry Pi. I programmed a patch in Scratch to play audio files when it receives these key presses, which you then hear over the headphones. There is no acoustic sound other than the dull clunk of stainless steel and copper pipes hitting one another. However, in the headphones is an atmospheric soundscape of calming field recordings and synthesizer drones.” 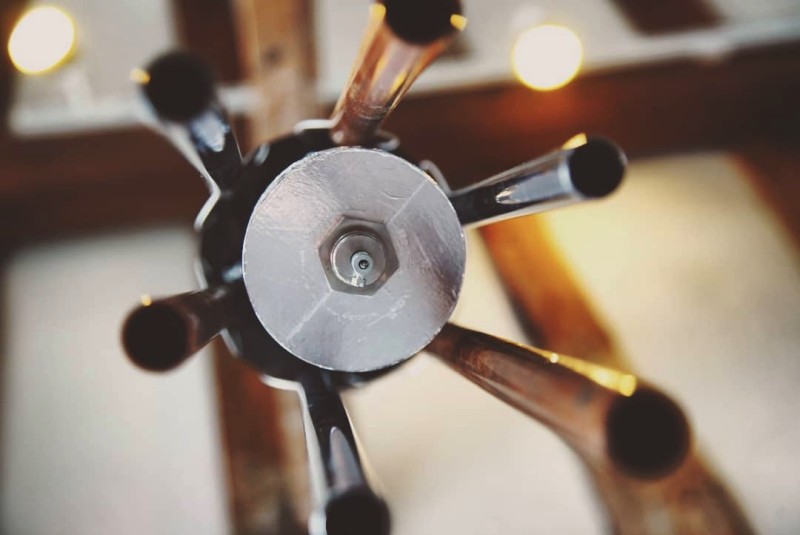 Frazer made the recordings using the Alchemy synthesizer in Logic Pro. “I used the amplitude of a waterfall recording (which I made in the Isle of Mull) to affect different parameters of the synthesizer,” he says. “In Scratch, there’s a variable counting every time the chimes ‘strike’ and when this is a modulus of 25, one of three large pulsating bass notes plays too, adding an element of surprise to the installation and encouraging you to keep playing and discovering more combinations of notes. Alongside this is a subtle field recording of the coastline from the same peaceful trip to the Isle of Mull, completing the escapist soundscape.”

Sounds idyllic, and Frazer has clearly enjoyed seeing people explore the possibilities of the chimes: “It’s so rewarding to see people playing and smiling with the chimes, creating their own soundscapes by activating them (some harder than others). My favourite comment was someone who called the work ‘curious’, as this summed up my work so much better than I ever could.” 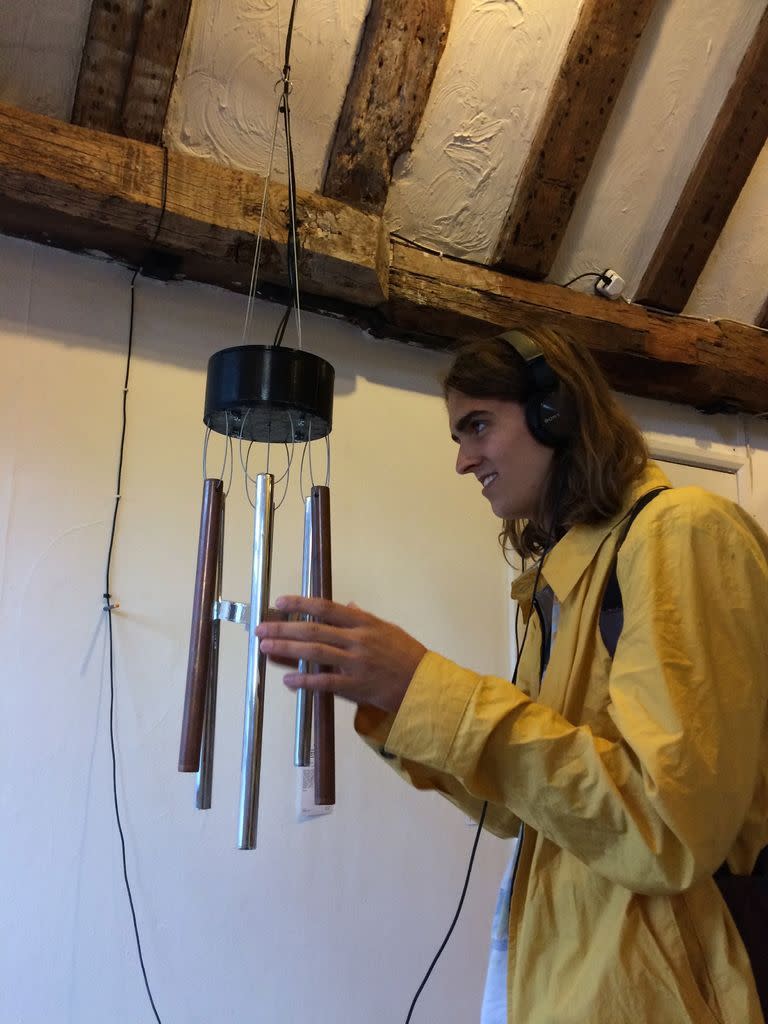 Frazer admits that it was a challenge to fit all of the components inside the head unit of the chimes, but “after cutting down a few cables and shuffling things around, I managed to fit it all in. Thankfully the support system is designed so I can easily adjust the hanging height from the beam above, which is very useful when installing in different venues.”

It was also his first project with a Raspberry Pi, which he used “because I wanted the chimes to be unmanned and to be installed for long periods of time, all without having to worry about securing a laptop somewhere behind the scenes.” 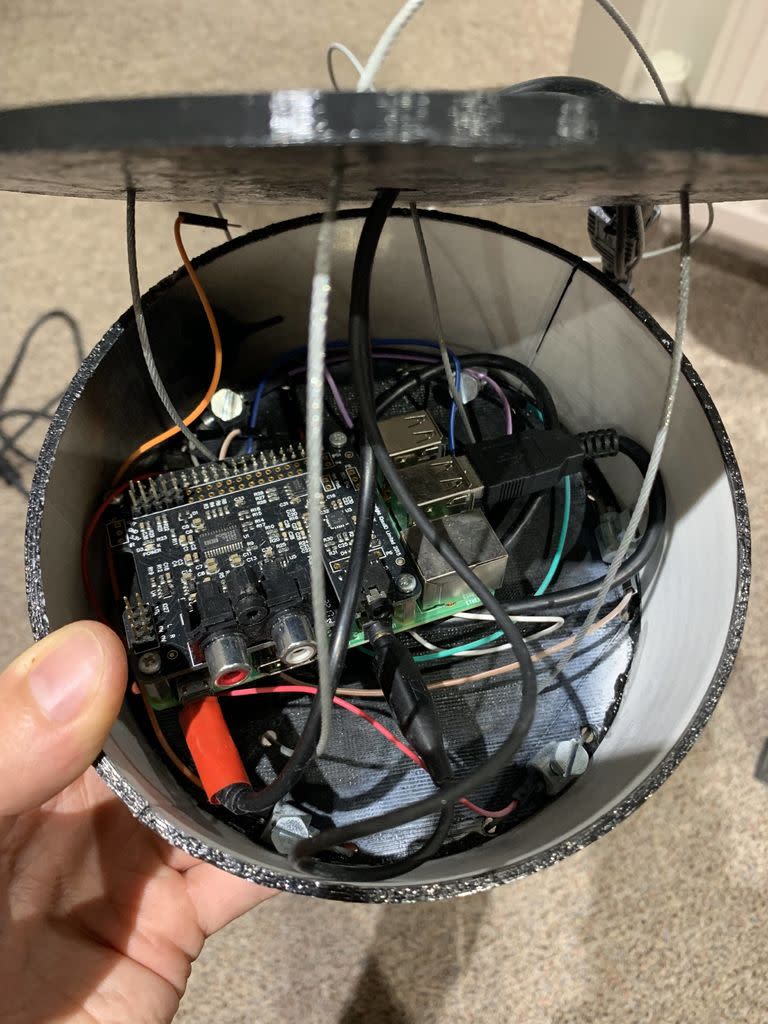 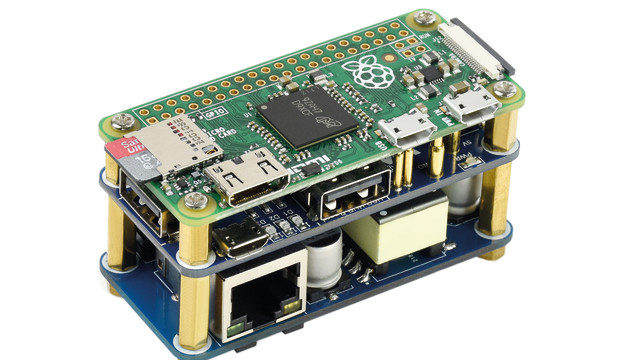