A complete camera kit with a fun design

The latest in Pimoroni’s growing range of Pi Zero W project kits, OctoCam provides everything you need to build your own cute camera. As with the other Pimoroni kits, the packaging is excellent and the hinged plastic case can be reused to store other components afterwards.

The full article can be found in The MagPi 59 and was written by Phil King.

Inside the box you’ll find a Raspberry Pi Zero W, a 5 MP mini camera (more on this later), and an octopus-shaped acrylic mount with four suction cups and a desk stand. The only things you need to add are a microSD card and a power supply. Bonus components in the box include USB and HDMI adapters for the Pi Zero W, along with a 50 cm USB to micro USB cable, a male 2×20-pin header (to solder on), and a sticker sheet.

Assembly of the main camera kit takes around 30 minutes using a step-by-step guide and is fairly straightforward, if a little fiddly at times. This is mainly due to the tiny nylon nuts, bolts and spacers, one of which we managed to drop on the floor! These fixtures secure the Raspberry Pi Zero W to the mount while keeping it far enough away from the camera to protect the latter from overheating. We found it a little tricky to keep the camera lens in the mount hole while folding over its short cable to position the Pi, but it was still a lot easier than the cable-twisting shenanigans involved when assembling the rival ZeroView camera mount. The optional desk stand is easily added, enabling you to sit the OctoCam on a shelf. 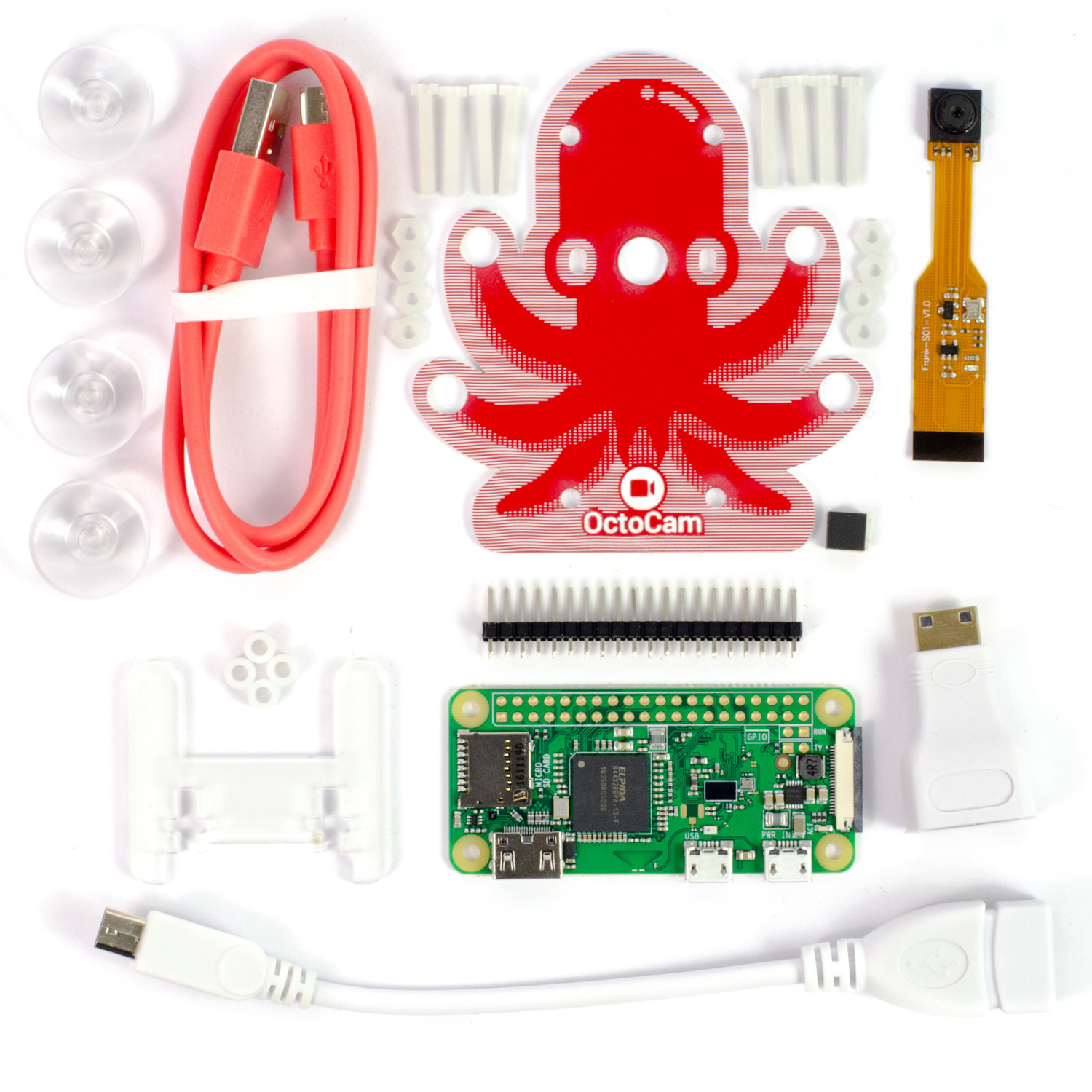 The camera itself is a third-party model (also available separately) with compact dimensions (60×11.4×5.1 mm). Some of the electronics are located on its flexible cable, so the end with the camera lens is a lot smaller than that of the official Raspberry Pi Camera Module. As it uses the same 5 MP sensor as the original v1 official Camera Module, it has similar specs and works straight out of the box, once you’ve enabled the camera in raspi-config on the Pi. You can use the standard raspistill and raspivid commands in a Terminal window, or by SSHing in from a remote computer.

The quality of the images is very good, as are captured videos (lacking sound, of course). Sticking the OctoCam to a window, we soon managed to capture a nice time-lapse of the setting sun – although we ended up stitching the images together on another computer, as it’s a bit too much for the Pi Zero W to handle.

Another obvious use for the OctoCam is as a CCTV security camera, using the motionEye OS operating system. Pimoroni’s online tutorial shows how to set this up, including preconfiguring the wireless connection – you’ll need to do this instead of starting with a wired connection to the router, as the Zero lacks an Ethernet port. We found the frame rate pretty low (2-3 fps) at anything but the lowest resolutions when using motion detection, dipping even lower when it started recording video. This appears to be due to the limitations of the Pi Zero and/or software, rather than the camera, as we discovered when we tried using a v2 Camera Module instead. Fortunately, if you just want to stream live video, turning off the motion detection (by activating the Fast Network Camera option) results in a decent frame rate.

With its compact dimensions and fun design, the OctoCam is very appealing. The third-party camera unit performs well, although the whole setup struggles to handle motion detection and recording in motionEye OS. It’s also a little expensive, considering that you could buy a Pi Zero W and the standalone mini camera for under £24. Sure, you get a few extras in the box along with the mount, but you might not want them all.