In previous tutorials, we’ve focused purely on the music possibilities of Sonic Pi, which can turn your Raspberry Pi into a performance-ready musical instrument. So far, we’ve learned how to:

There’s so much more to show you (which we will explore in future editions). However, this month, let’s look at something Sonic Pi can do that you probably didn’t realise: control Minecraft.

OK, let’s get started. Boot up your Raspberry Pi, fire up Minecraft Pi, and create a new world in it. Now start up Sonic Pi, and resize and move your windows so that you can see both Sonic Pi and Minecraft Pi at the same time.

In a fresh buffer, type the following:

Now, hit Run. Boom! Your message appeared in Minecraft! How easy was that? Now, stop reading this for a moment and play about with your own messages. Have fun! 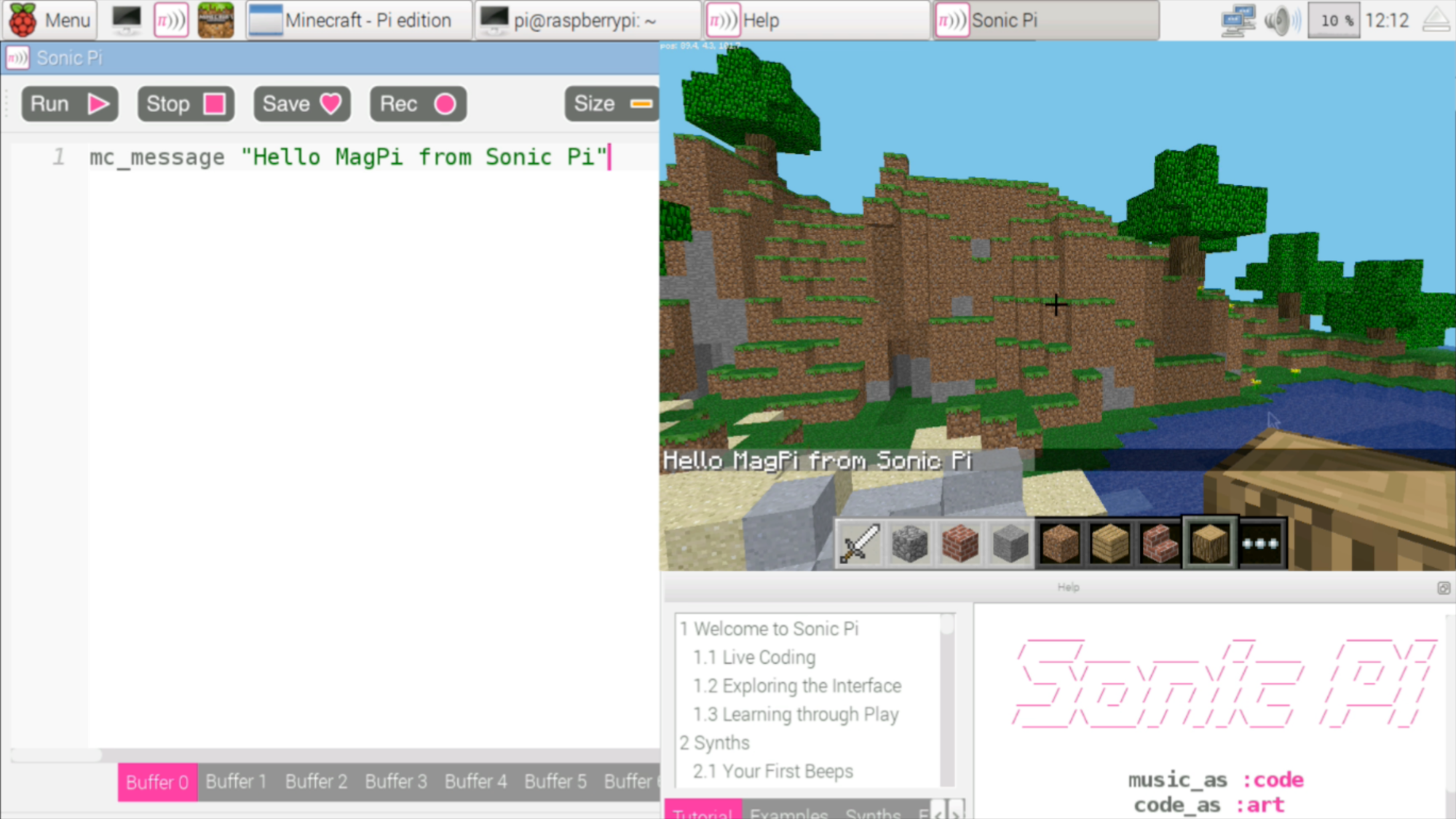 Now let’s do some exploring. The standard option is to reach for the mouse and keyboard and start walking around. That works, but it’s pretty slow and boring. It would be far better if we had some sort of teleport machine. Well, thanks to Sonic Pi, we have one. Try this:

Crikey! That was a long way up. If you weren’t in flying mode, then you would have fallen back down all the way to the ground. If you double-tap the space bar to enter flying mode and teleport again, you’ll stay hovering at the location you zap to.

Now, what do those numbers mean? We have three numbers which describe the coordinates of where in the Minecraft world we want to go. We give each number a name: x, y, and z:

By choosing different values for x, y, and z, we can teleport anywhere in our world. Try it! Choose different numbers and see where you can end up. If the screen goes black, it’s because you’ve teleported yourself under the ground or into a mountain. Just choose a higher y value to get back out above land. Keep on exploring until you find somewhere you like.

Using the ideas so far, let’s build a Sonic teleporter that makes a fun teleport sound whilst it whizzes us across the Minecraft world: 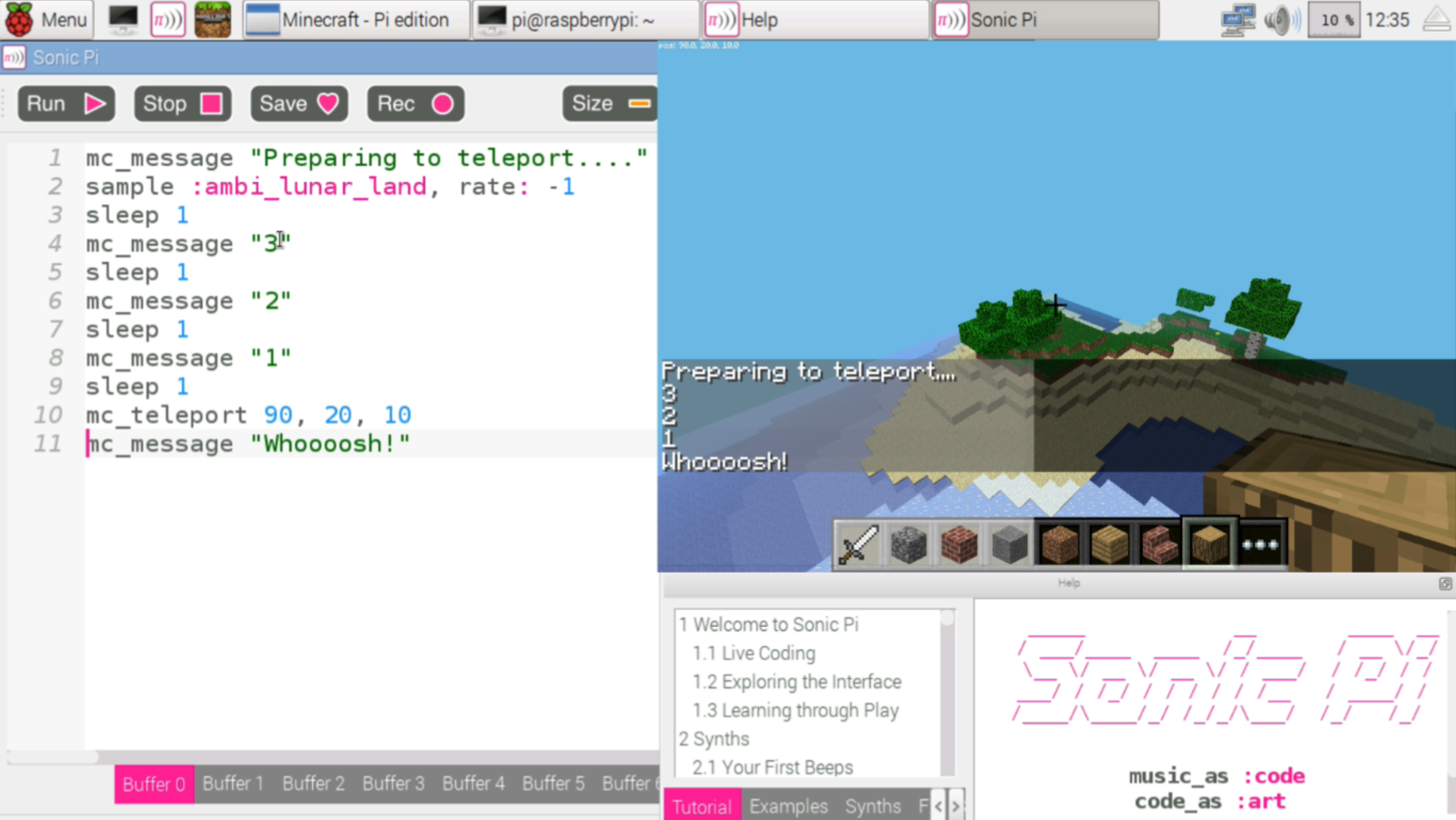 Now you’ve found a nice spot, let’s start building. You could do what you’re used to and start clicking the mouse furiously to place blocks under the cursor. Or you could use the magic of Sonic Pi. Try this: Now look up: there’s a melon in the sky! Take a moment to look at the code. What did we do? On line one we grabbed the current location of Steve as the variables x, y, and z. These correspond to our coordinates described above. We use these coordinates in the function mc_set_block, which will place the block of your choosing at the specified coordinates. In order to make something higher up in the sky, we just need to increase the y value, which is why we add 5 to it. Let’s make a long trail of them:

Now, jump over to Minecraft, make sure you’re in flying mode (double-tap the space bar if not) and fly all around the world. Look behind you to see a pretty trail of melon blocks! See what kind of twisty patterns you can make in the sky.

Those of you that have been following this tutorial over the last few months will probably have your minds blown at this point. The trail of melons is pretty cool, but the most exciting part of the previous example is that you can use liveloop with Minecraft! For those who don’t know, liveloop is Sonic Pi’s special magic ability that no other programming language has. It lets you run multiple loops at the same time and allows you to change them whilst they run. They are incredibly powerful, and amazing fun. I use liveloop to perform music in nightclubs with Sonic Pi: DJs may use discs, but I use liveloop instead! However, today we’re going to be live-coding both music and Minecraft.

Let’s get started. Run the code above and start making your melon trail again. Now, without stopping the code, just simply change :melon to :brick and hit run. Hey presto, you’re now making a brick trail. How simple was that! Fancy some music to go with it? Easy. Try this:

Now, whilst that’s playing, start changing the code. Change the block types: you could try :water, :grass, or your favourite block type. Also, try changing the cutoff value from 70 to 80 and then up to 100. Isn’t this fun?

Bringing it all together

Let’s combine everything we’ve seen so far with a little extra magic. We’ll combine our teleportation ability with block placing and music to make a Minecraft music video. Don’t worry if you don’t understand it all: just type it in and have a play by changing some of the values whilst it’s running live. Have fun, and see you next time...