Never mind a packed lunch, have a Pac-Man lunch with this mini retro arcade in a box.

Having already built a full-size tabletop-style arcade cabinet powered by a Raspberry Pi, Daniel Davis wanted to make something a little more portable to feed his passion for retro gaming. So when he acquired an old metal lunchbox, the last thing on his mind was using it to store sandwiches. Instead, he opted to pack it with a retro arcade system built using a Raspberry Pi 3, Adafruit Backpack 5-inch HDMI touchscreen, Adafruit Arcade Bonnet, speaker, plus an analogue joystick and mini arcade buttons.

“The challenge was sourcing arcade buttons and components that would fit,” says Daniel. “For instance, standard-sized arcade buttons were too large to fit inside. I also had to take into consideration the depth of the screen so that when the lid closed, it didn’t smash into any of the other components.”

This article first appeared in The MagPi #67 and was written by Phil King.

Rather than simply cramming components into the box, Daniel wanted to make the system organised and easy to use, “so that anyone could open it up and be familiar with the control layout (which mimics that of an NES controller or Game Boy).”

To keep everything looking secure, and hide the wiring, Daniel 3D-printed a screen holder and controller board that he’d designed in a CAD program. “Once I had all the components laid out, I did a couple of test prints to make sure everything fit, but then I realised that I hadn’t designed anywhere for the wires to go (especially for the screen). So I had to go back and redesign the casing to allow room for the various wiring.”
Daniel recalls that a lot of time was spent measuring, testing, and measuring again. “I went through several different types of arcade buttons before I found ones that did the job and fit in such a small space.”

Ensuring that the control panel was low enough to allow enough room for the screen when the box was closed was another crucial factor: “If the lunchbox couldn’t close properly, it defeated the whole purpose of the project.”

Daniel tells us that his previous experience of building an arcade cabinet in 2013 helped when approaching this much smaller project. Since then, the build process has become a lot easier, thanks to the availability of various Raspberry Pi HATs and bonnets which “made everything a breeze to connect. Aside from that, the available software for the Pi to make arcade emulation possible is also something that has become a lot better over the years.”

Daniel spent about 20 hours, spread over several weeks, to complete the build. The end result is a cute and compact arcade system that’s simple to pick up and play.

Upon being shown the Mini Lunchbox Arcade, Daniel’s nephew was “really shocked to see what was inside. He was able to immediately figure out how to turn it on and start playing a game. He did say that if I could find a way to sell them, all of his friends would buy one and I’d make a million dollars. That’s quite the endorsement!”

One obvious problem with using a metal box is its conductivity, so to avoid any possibility of short circuits, Daniel lined it with Kaplon insulating tape before adding the electronics. 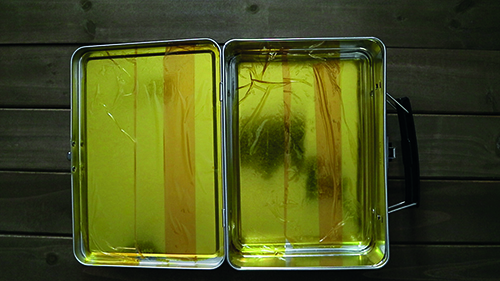 The analogue thumb joystick, six buttons, and 0.25 W 8 Ω speaker were connected to an Adafruit Arcade Bonnet. A couple of freely available scripts were then run to get everything working. 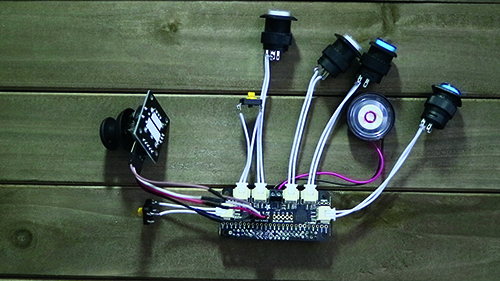 After careful measuring, Daniel designed and 3D-printed a screen holder, which he hot-glued to the lunchbox lid, and a board to house the arcade controls and speaker. 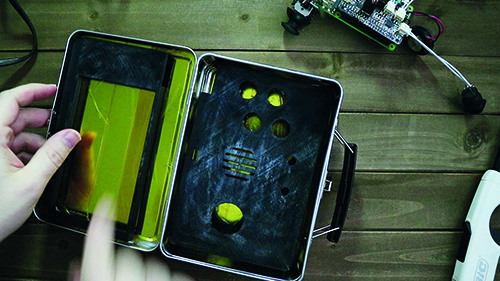