Matt Gray has been making for years – both in terms of cool projects and also cool YouTube videos. He’s recently been in the spotlight for a great hack of a Game Boy Camera; however, he deserves a bit more fanfare than that for all he does.

“I’m a Broadcast Engineer by day, but I’ve been making videos on YouTube for over a decade now!” Matt explains to us. “I’ve also helped organise Electromagnetic Field Festival, a non-profit UK camping festival for those with an inquisitive mind or an interest in making things: hackers, artists, geeks, crafters, scientists, and engineers.

“I’ve been making bits and bobs for years, the bigger projects generally being ones that make me laugh: The Webcycle, an exercise bike that only lets you use the internet when you’re pedalling. 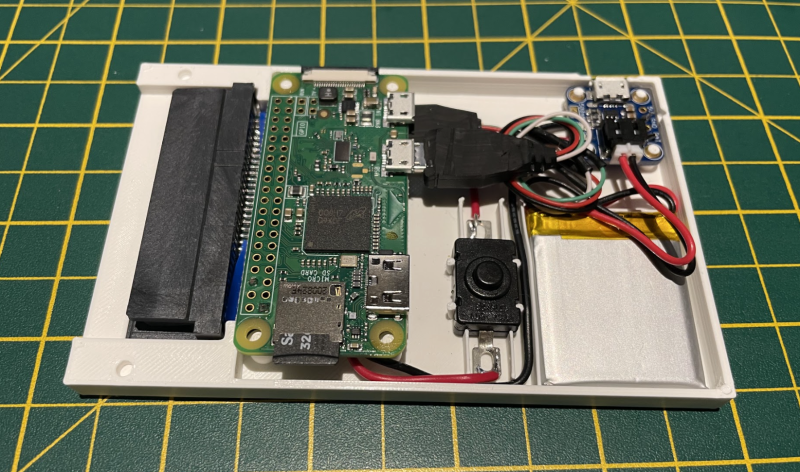 “The Freddie Mercury Thermometer, because it seemed like no-one had made that joke yet.

“[And] the Hoverpub, where we converted a small hovercraft into a pub!”

I found out about Raspberry Pi when it very first came out, and I used the original Raspberry Pi as part of the Freddie Mercury Thermometer.

Where did the Game Boy Camera hack idea come from?

I’ve had my Game Boy Camera since the 1990s: it was my first digital camera, and I love it! It’s a cartridge that goes into the Game Boy like a game, but converts it into a camera. The photos it takes are really low resolution (128 × 112 px) and greyscale but, considering that, I’m always surprised by how clearly the photos can come out

It was only ever designed to take 30 photos, print them using the Game Boy Printer, then delete them to make space for more. But after years in a box, I wanted to use it again, and after some searching online, I found a long-winded way to get photos off the camera around 2013, and was able to start using it again to not only take photos, but also share online. Its 30-photo limit was getting annoying after a while, and I didn’t want to also have to lug a laptop and bunch of cables and adapters around with me to be able to clear it off. Then it hit me. A Raspberry Pi Zero is a tiny computer I could take with me… With my newly arrived 3D printer, I could combine [Raspberry] Pi and all the other bits needed into one compact unit to take with me!

How does the Game Boy Camera hack work?

Inside the custom 3D-printed case, there’s a USB Game Boy cartridge reader plugged into a Raspberry Pi Zero W, which are powered by a LiPo battery via an Adafruit MicroLipo charger and a switch. I’ve programmed [this] Raspberry Pi so that when you turn it on with the camera plugged in, it automatically runs the cartridge reader’s software to extract photos from it, and save them onto Raspberry Pi. Then it hosts a WiFi network, so you can connect to it and download the photos from its web page.

For more details and to see it in action, please watch my YouTube video on it.

What else do you vlog about?

This isn’t my first escapade with the Game Boy Camera. A few years ago I worked out how to take colour photos with it, even though it’s only greyscale! And you might know me from my previous project, ‘Will it soft serve?’.