Before digital cameras became popular, photographers would use film to capture their images. They’d take a set number of shots and send their snaps away to be processed, but then they’d have to wait days – or even weeks – to see the results.

Instant cameras were invented to speed up this process. Polaroid became famous for making cameras that could print out a paper-based photo in seconds. A few shakes, and the image would appear as if by magic. While instant cameras have fallen out of favour with the advent of digital cameras, the appeal of the concept endures.

Abhishek Singh certainly likes it. Motivated by the desire to build something physical, and spurred on by his love of animated GIFs (“my earlier projects have revolved around them as well,” he tells us), he has harnessed the power of the Raspberry Pi and moved the instant camera into the 21st century. By inserting a cartridge with a tiny screen into his cool retro-inspired invention, you can record a GIF, wait for the cartridge to pop out and, after a few seconds, watch and enjoy the mini-video. What’s more, the device looks just like a vintage Polaroid OneStep camera.

“Something about holding a moving image sounded intriguing,” Abhishek explains. “It’s instantly relatable, and it has the unique and exciting interaction of a physical image coming out immediately that you can hand to a person. I wanted to recreate the experience of a Polaroid in a new way.”

“I had to think and visualise ways of assembling the thing, and look at how it would be disassembled if I had to troubleshoot something,” explains Abhishek. “I needed to consider how everything would fit together and be placed to minimise the size. A lot had to be done to conserve space, and I mutilated both of the Raspberry Pis I used in the project quite a bit, but that’s what made using them so great.”

The Raspberry Pi devices were trimmed and sanded. The Ethernet port and a dual USB port were removed from the Raspberry Pi 3, so the mounting holes could be used for the camera chassis. Four circuits were produced to manage the wiring and distribute power, and Abhishek made his own USB cables. Major issues included finding a suitable way of ejecting the cartridge from the camera (Abhishek chose a rack-and-pinion mechanism with wheels to eliminate friction), and solving a wide-angle problem. “But I like the community the Pi has,” he says. “A solution to the problem you are facing is probably out there somewhere.” 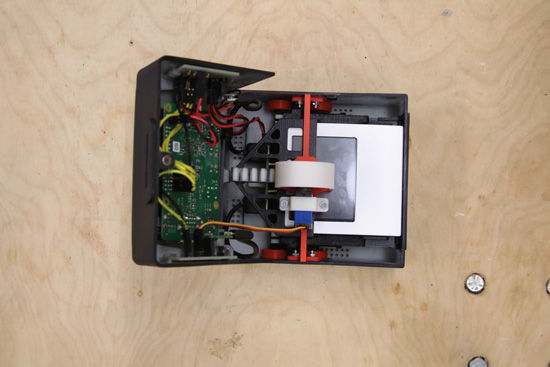 It helped that he split the project into small, doable chunks. “It meant I could go through an individual process of iteration, testing and refinement,” he adds. Indeed, once the working pieces were ready, it was simply a case of assembling them into the printed plastic components that made up both the camera and the cartridge. Finally, Abhishek could point the camera, press the record button, and watch as the cartridge popped out and the GIF appeared.

Was it worth it? “The reaction has been super-positive,” he says. “For me, it was not so much about the learning curve being steep as about finding creative solutions to the problems that arise every step of the way.”

Quick Facts about the Instagif Nextstep

There wasn’t much space for the components in this build. Abhishek fitted a 2.8-inch PiTFT screen into the cartridge, and he chose a 400 mAh LiPo battery to power the cartridge when it’s ejected. 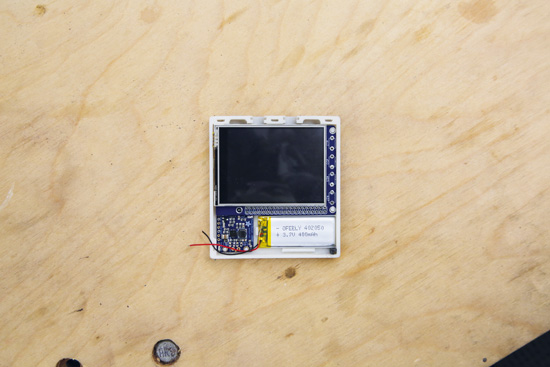 A Raspberry Pi Zero W was soldered to the screen. Abhishek removed the header pins from the screen, sanded down the Pi’s micro USB ports and PCB, and removed the top casing from the HDMI port. 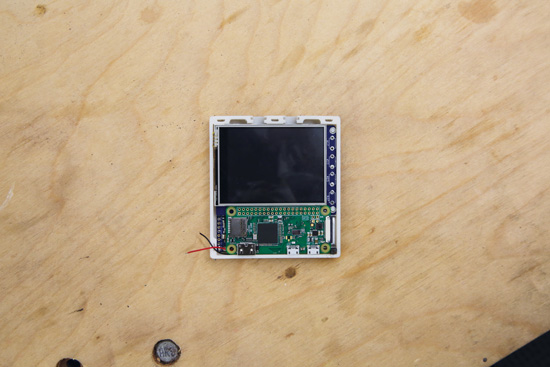 The cartridge is charged by a PowerBoost 1000C charger in the camera. Python and Node scripts run in the camera, handling the connections and camera control. Clicking the button starts and stops the GIF recordings. 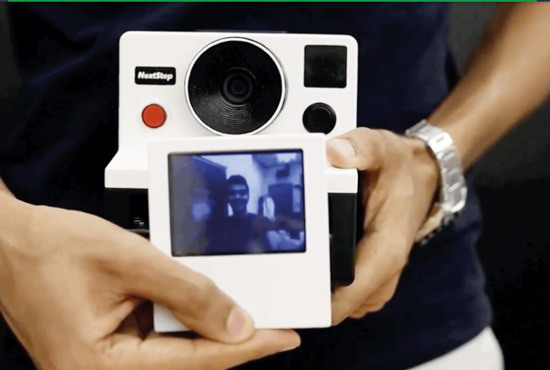