At the heart of Raspberry Pi 4 sits an ARM Cortex-A72 CPU (central processing unit) running at a maximum clock speed of 1,500MHz (or 1.5GHz).
The clock is the electronic pulse used to synchronise all the components in a processor. A maximum clock speed of 1.5GHz means the processor updates one-and-a-half billion times per second. But it could do even more...

Experimenting to find the highest stable overclock involves crashing Raspberry Pi 4. There is a chance of corrupting the microSD card. Experiment with a clean Raspbian installation and ensure no important data is at risk.

Although 1.5GHz is its maximum speed, Raspberry Pi typically idles at 600MHz and switches to the maximum speed when needed. Overclocking is the process of setting a higher maximum speed for computer components. We can adjust the settings in config.txt to overclock both the CPU and GPU (graphics processing unit).

We’ve experimented with speeds up to 2.147GHz for the CPU and 750MHz for the GPU (up from its 500MHz default). These are the kinds of speeds found on high-end desktop computers.

Your mileage will vary and, if Raspberry Pi gets too hot, it will slow right down. Experimenting with overclocking will crash Raspbian, and there is a high chance your Raspberry Pi will refuse to start at some point. If programs start crashing, or Raspbian refuses to start, you will need to dial back on the speed. But overclocking is fun and potentially a way to get more from Raspberry Pi.

We start by placing Raspberry Pi 4 in a vertical position. This improves airflow around the components and is surprisingly effective at keeping the temperature down.

Alternatively, place your Raspberry Pi inside a case designed to manage its CPU temperature. 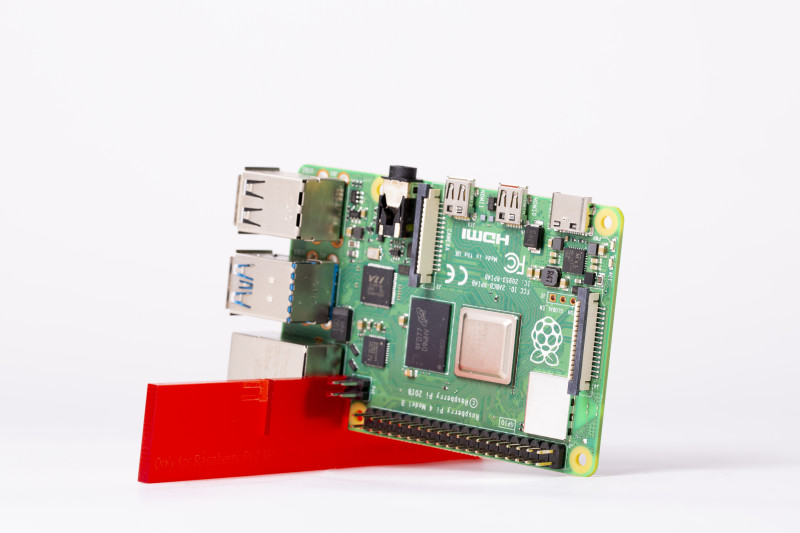 Make sure you are running the latest version of Raspbian OS. Tweaks to performance are being made all the time and you will hit faster speeds with the latest software.

Open a Terminal and enter the following:

Before we start overclocking, take a look at the default CPU speed. Open a Terminal and enter: cat /sys/devices/system/cpu/cpu0/cpufreq/scaling_cur_freq

Terminal will probably return 600000. Divide this result by 1000 and you’ll get the speed in MHz. This is the base speed: 600MHz (or 0.6GHz). This is the speed requested by the kernel. If your Raspberry Pi is being throttled due to low voltage or over temperature, the actual CPU speed may be lower.

To get the actual speed, enter:

As you use your Raspberry Pi, the requested speed will boost to its upper level, which is 1500000. You can keep entering vcgencmd in Terminal to see where it’s currently at, but it’s better to use the watch command to monitor the speed.

This keeps vcgencmd running as a process and updates the result once per second (the -n 1 option is the interval in seconds). Start using your Raspberry Pi and you’ll soon see the result go slightly above 1500000 (or 1.5GHz). 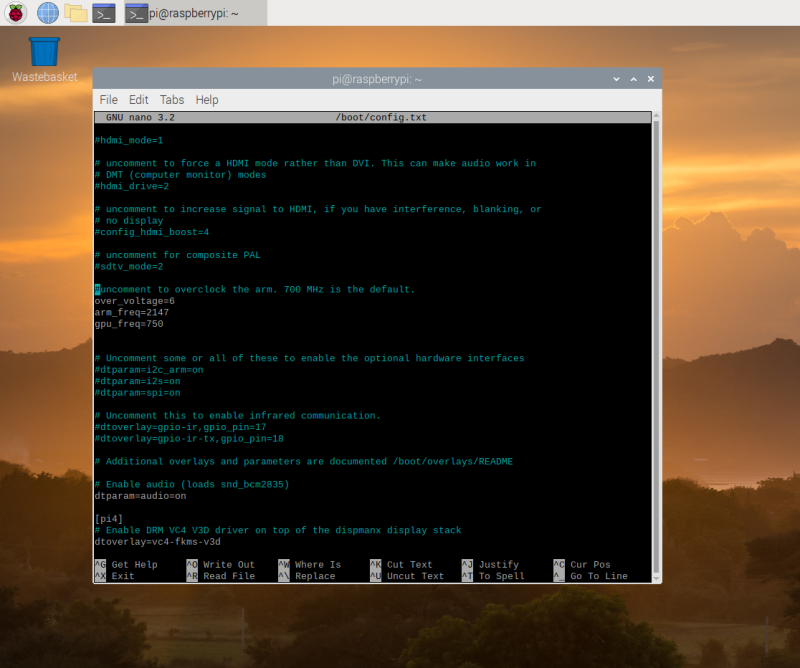 We’re going to use the config.txt file to set a new upper limit for the clock frequency. Open another Terminal window and enter: sudo nano /boot/config.txt

Scroll down to the section marked:

And change the settings to:

Save the file with CTRL+O (press RETURN) and use CTRL+X to exit Nano.

When the system starts up again, watch vcgendcmd again to see your new, faster clock speed in action: 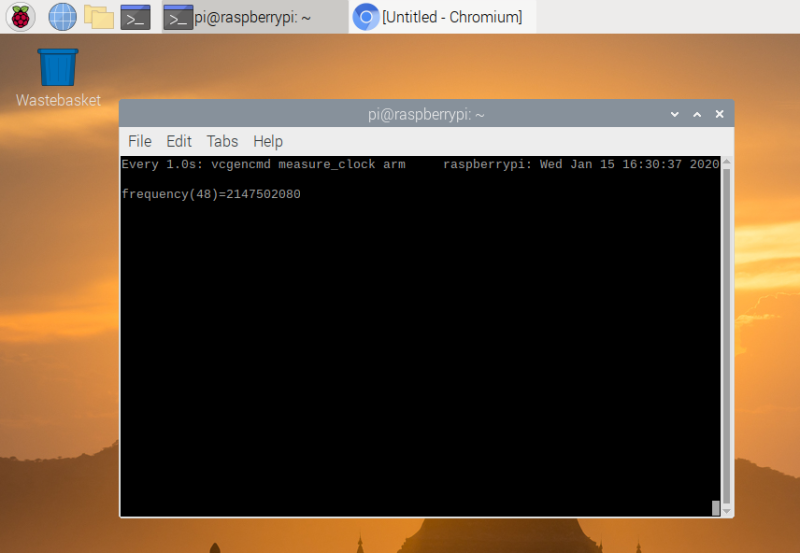 The over_voltage command adjusts the core CPU/GPU voltage, and accepts figures between -16 and 8. The default value is 0.

A faster CPU speed demands higher voltage and, if Raspberry Pi doesn’t get enough volts, you will see a small lightning bolt appearing in the top right of the window (at this point, the CPU will be reduced to the 700MHz default speed).

Let’s try taking things a little faster. We’re going to take the over_voltage setting to 6 and set the ARM CPU to 2.0GHz. Edit the config.txt file with the following settings:

This is as high as we’re going to take over_voltage.

Now we’re going to boost the gpu_freq and take the CPU to its highest setting. This enables Raspberry Pi to run at its current maximum speed. Use Nano to edit the config.txt file again, this time setting the arm_freq to 2147 and gpu_freq to 750:

The gpu_freq oversees a range of settings:  core_freq, h264_freq, isp_freq, and v3d_freq. The core_freq setting adjusts the frequency of the GPU processor. It influences CPU performance because it drives the L2 cache and memory bus.

The default value is 500, and 750 is the highest we can set it and still had a Raspberry Pi 4 run. We have also had Raspberry Pi 4 boards fail to boot at this speed, and others quickly slowed down from overheating or undervoltage. You are unlikely to be able to maintain this speed for the long term and your mileage will vary.

Save the file and exit Nano (CTRL+O and CTRL+X). Reboot and your Raspberry Pi is hopefully running as fast as it can.

We have started a Raspberry Pi at speeds of up to 2.147GHz but some of our devices failed to boot, and others showed Undervoltage Warnings (thus reducing the speed). Eventually, we settled for arm_freq=2000 in config.txt. Our engineering team told us that the benefits from gpu_freq are marginal at best, and it should be removed if Raspberry Pi 4 fails to boot.

Your Raspberry Pi will also probably fail to boot at some point when overclocking. See ‘Overclocking problems’ (below) for more information on recovery. Otherwise, have fun and we hope you've enjoyed this excursion into overclocking.

It is essential to keep the supply voltage above 4.8 V for reliable performance. Note that the voltage from some USB chargers/power supplies can fall as low as 4.2 V. This is because they are usually designed to charge a 3.7 V LiPo battery, not to supply 5 V to a computer.

To monitor Raspberry Pi’s PSU voltage, you will need to use a multimeter to measure between the VCC (5 V) and GND pins on the GPIO. More information is available on the Raspberry Pi website.

Most overclocking issues show up immediately with a failure to boot. If this occurs, hold down the SHIFT key during the next boot. This will temporarily disable all overclocking, allowing you to boot successfully and then edit your settings.

Alternatively, remove the microSD card from your Raspberry Pi and insert it into another computer. You will be able to access the config.txt file and adjust the settings from there.

Under certain circumstances, the Raspberry Pi firmware will display a warning icon on the display, to indicate an issue. If you see these icons routinely appearing, you should reduce the overclocking speed.

There are currently three icons that can be displayed:

If the power supply to the Raspberry Pi drops below 4.63 V (+/-5%), this lightning bolt icon is displayed.

If the temperature of the SoC is between 80°C and 85°C, this icon is displayed. The ARM core(s) will be throttled back in an attempt to reduce the core temperature.

Over temperature warning (over 85°C)

If the temperature of the SoC is over 85°C, this icon is displayed. The ARM core(s) and the GPU will be throttled back in an attempt to reduce the core temperature. 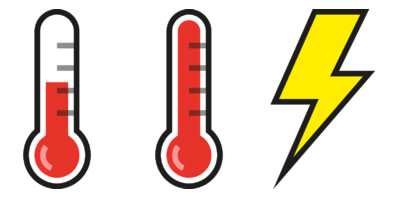