“Open the pod bay doors, HAL” are chilling words to anybody who has watched 2001: A Space Odyssey, apart from one maker who decided it would be a good idea to build HAL 9000 for real

I had this Raspberry PI Model B waiting to become something great,” says Djordje Ungar, “and what greater thing can a computer hope for than to become the iconic computer from Stanley Kubrick’s 2001: A Space Odyssey? I mean, come on!

“The first time I heard synthesized speech, I thought to myself: ‘Wow, how cool would it be if that was a voice of HAL 9000?’ It was when I stumbled upon Jasper, this amazing open-source project that allows you to control a computer with your voice, that I knew I had to make HAL.”

Aside from the Raspberry Pi, all the other parts are off-the-shelf computer components that you can buy online. “I used a 3mm thick black acrylic, and I’ve painted some parts to look metallic,” Djordje reveals. “The box is 300 × 96 × 62mm, which is a bit larger than a tall carton of milk.

“I examined a dozen movie stills from the film,” he continues. “I was only able to guess the actual size of the original HAL, so I based it off the lens. Some things like the number of holes on the speaker panel and the logo are spot on.” 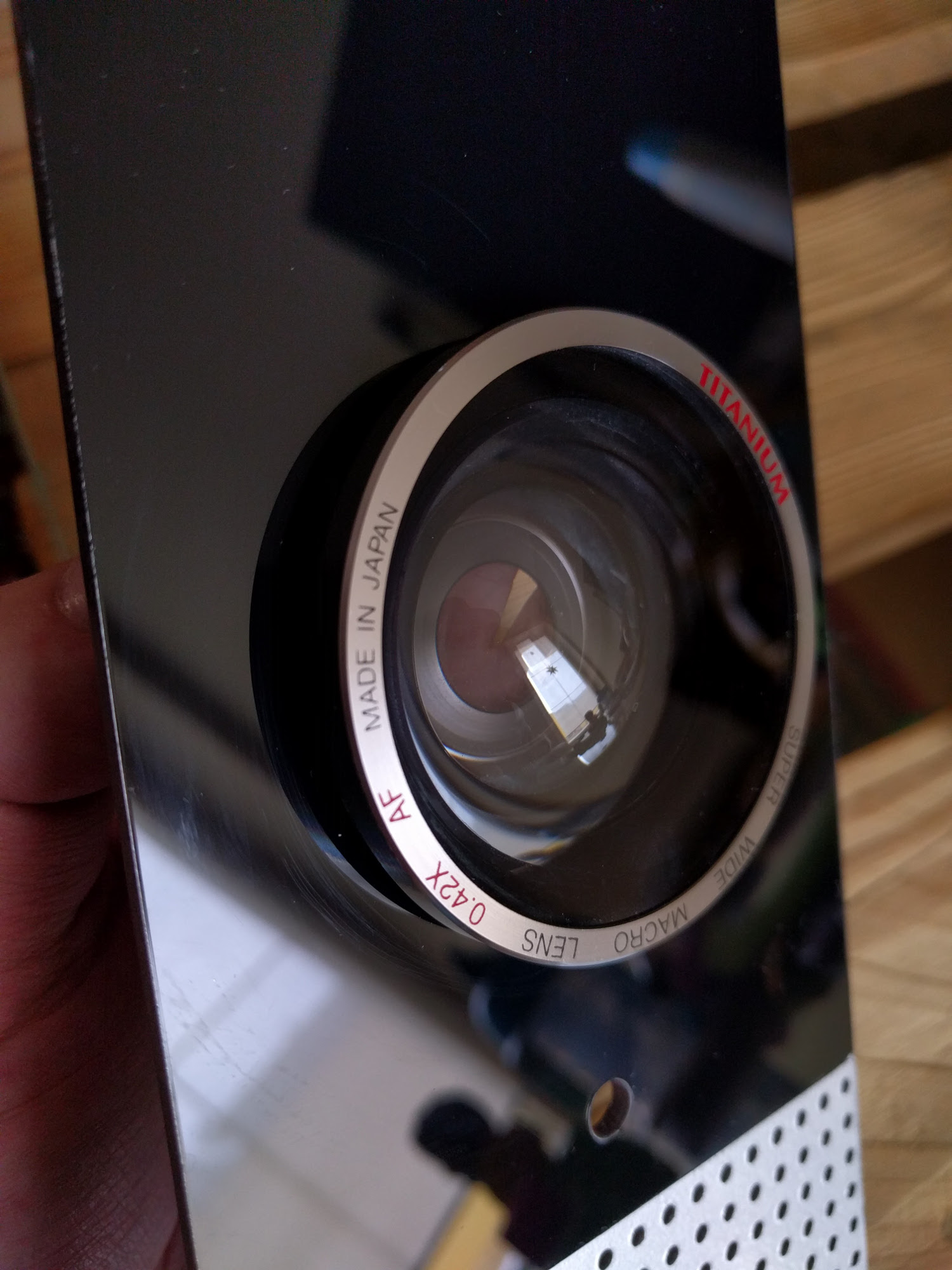 To allow HAL 9000 to see, Djordje added a webcam and camera lens. “I wanted to find a super convex lens like the one from the movie, but lenses of that calibre are anything but cheap. Even the used ones were way too expensive. So I had to settle for a cheaper, non-convex lens.” Luckily, he found a used one that he liked, via local classified advertisements: a Titanium Super Wide Lens 0.42x AF.

“The lens is mostly for style, to give the whole build a more polished look, but it does also expand the field of view of the webcam a little.

“The truth is: I didn’t need the webcam. I only needed the microphone. But since they come bundled together, having a webcam was a plus. I removed the casing and left the circuit board exposed, to make it as compact as possible. Then I glued it onto the ring that goes on the back of the lens.” 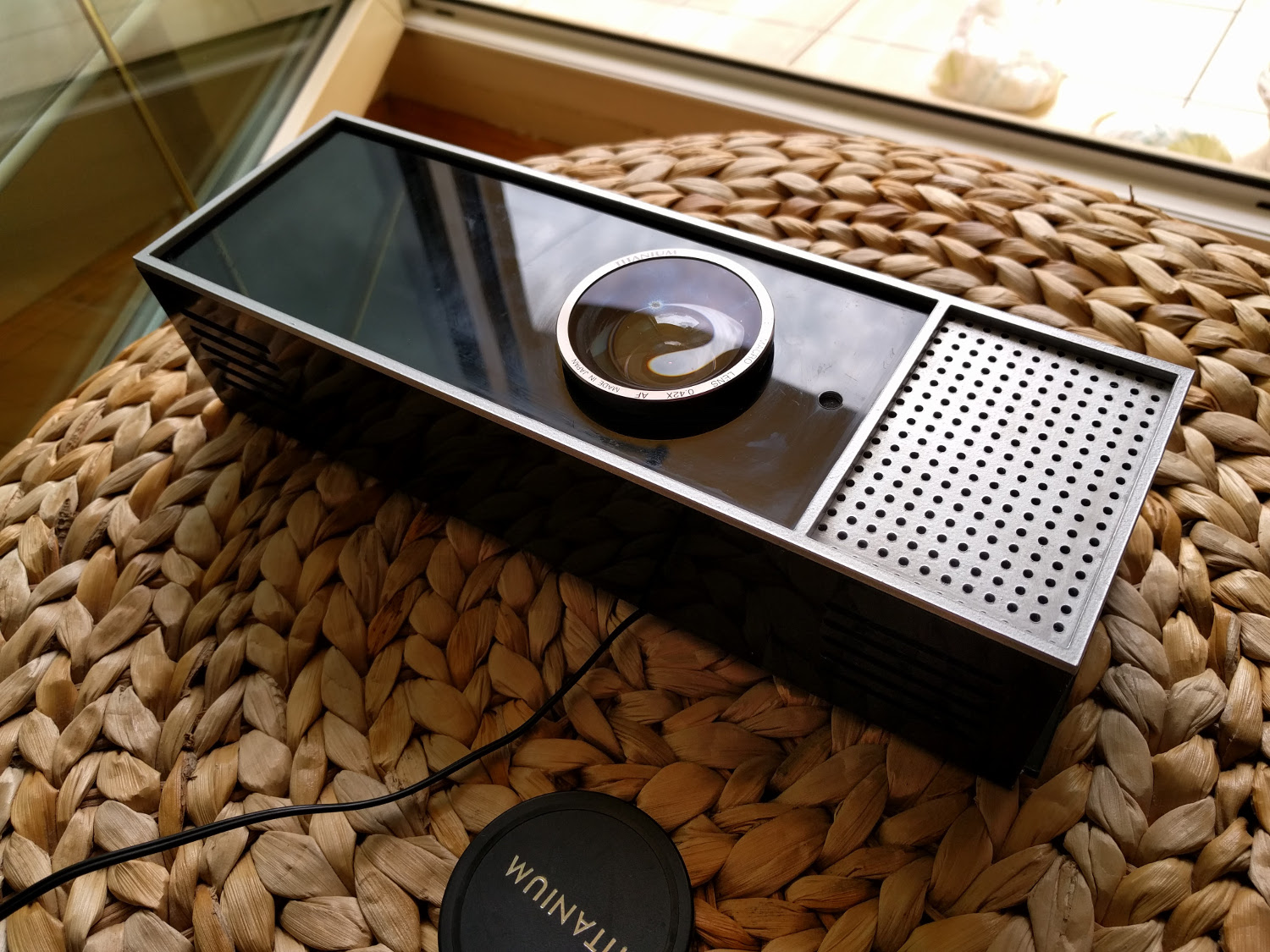 For HAL 9000’s voice and brain, Djordje fitted a speaker and a Raspberry Pi inside the case. “My only criterion for the speaker was that it should be small and fit inside the case,” he tells us. The brain is the Raspberry Pi running the Jasper project.

“I had a couple of options, but I chose eSpeak (magpi.cc/29iKtdt) since I’m most familiar with it.”

It works as a voice assistant, but it can play any WAV files, including the classic lines from the movie. “I wrote a simple Jasper module that will play random WAV files.”

Djordje’s friends are impressed by the project: “In a world where you can talk to your phone’s digital assistants, or ask Google a question with your voice, no one is blown away by the fact that HAL responds to voice commands, but everyone loved the case and wanted one.”