Visit New York and it’s hard not to be overwhelmed by the glittering scale of Times Square. Spread over millions of square feet, flanked by skyscrapers and assaulting the eyes with brightly lit advertisement hoardings, it is one of the world’s most visited tourist attractions.

The full article can be found in The MagPi 60 and was written by David Crookes.

While the owner of the globe’s largest and most expensive digital billboard once declared, “size matters in Times Square,” one company, Gulliver’s Gate, is proving that small can be equally beautiful. It has spent $40 million bringing together 50 nations in a 49,000 sq ft (4,552 m2) miniature world, situated in the former New York Times building on 44th Street. What’s more, it has made great use of 23 Raspberry Pi Zeros.

By connecting the Pis to 23 ten‑inch and seven-inch screens, artist and design technologist Uttam Grandhi, together with a talented team from Brooklyn Model Works, has brought a 1:87 scale recreation of Times Square to life. They have used the displays (which were bought, complete with LCD control boards, from the electrical retailer Banggood.com) as small-factor digital billboards, fixing them to both the façades and terraces of the recreated towers.

“We’ve situated them on different miniature buildings and in different orientations,” Uttam says, having used them in both landscape and portrait mode. “Our designer, Martin Eisler, had to design a modular mounting mechanism for the frames based on the Banggood screen dimensions. The frame parts were cut in 1/8-inch black cast acrylic and they were sanded and glued together with Acrifix solvent cement.” 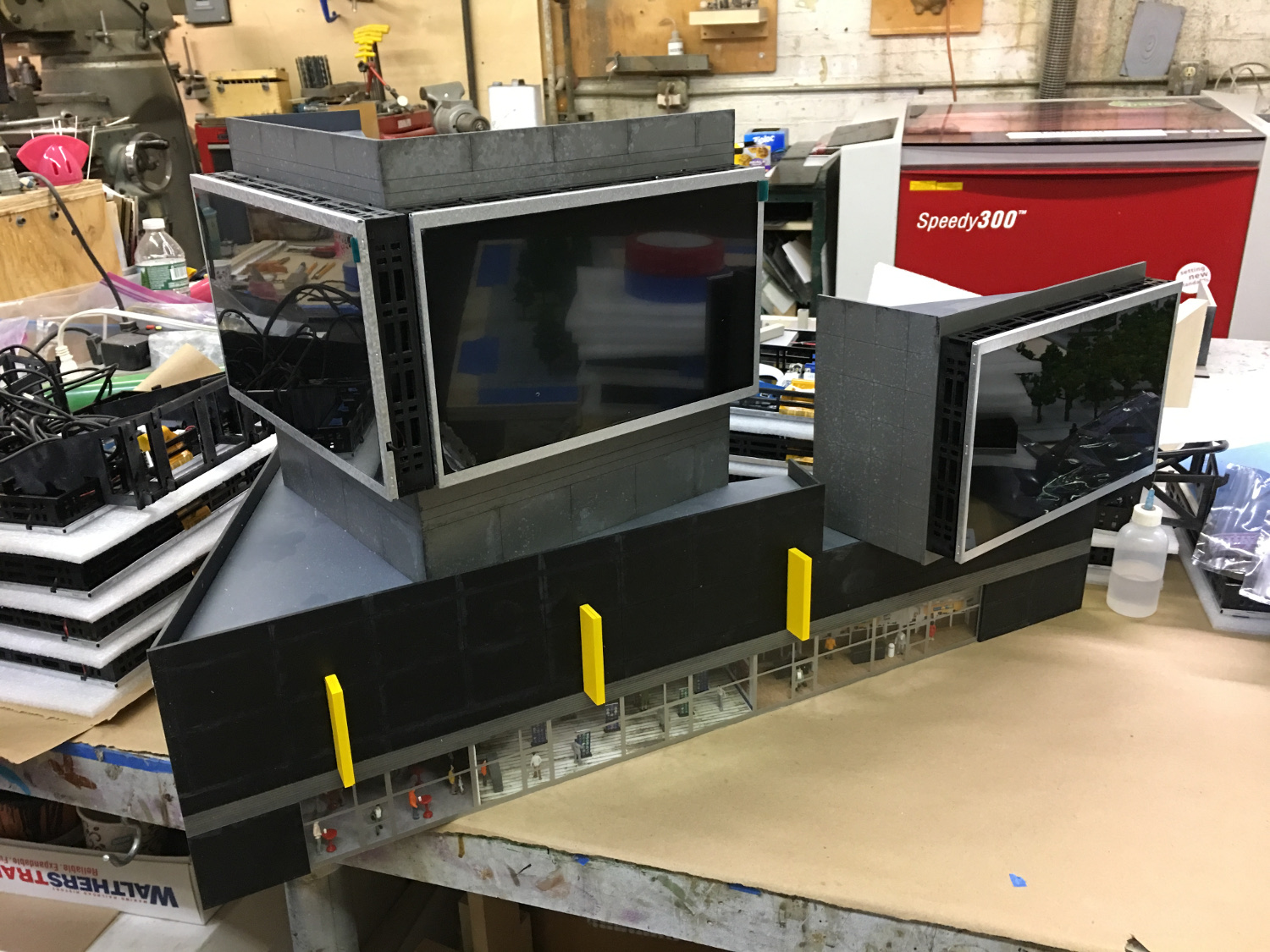 To fix the screen controllers to the displays, the team marked the mounting holes before drilling and taping them. “We only used three holes to mount the controller board because its base is not flat, and tightening all four screws would have tilted it to one side,” explains Uttam. “The screens were attached to the frames using clear VHB tape.”

With all of that in place, they could attach the HDMI and power cables to the screen controllers. There wasn’t enough room for standard cables, so they used HDMI flat angle adapters, which also provided a measure of safety. “The board wouldn’t be damaged if someone accidentally yanked the cables,” Uttam tells us. The cables were then secured with ties to keep them contained.

With construction complete, they could prepare the Pi Zeros. Uttam burned the Raspbian OS on to a microSD card using the Etcher app, and installed Adafruit’s Raspberry Pi Video Looper to display the ads. “We used a library, so most of the programming task was already complete,” he continues. “But to save some time in configuring all of the Pis, I wrote scripts to set static IPs and change host names.”

The Pis have been connected to a 24-port Ethernet switch and placed under the platform on which the models sit. The team could then begin to gather adverts, which have come from the advertisers themselves, shining brightly from the buildings they adorn. “They really added depth and dynamism to the otherwise still buildings,” Uttam says of the final result. “Targeting visitors by running real ads on the miniature screens is a real stroke of genius.” 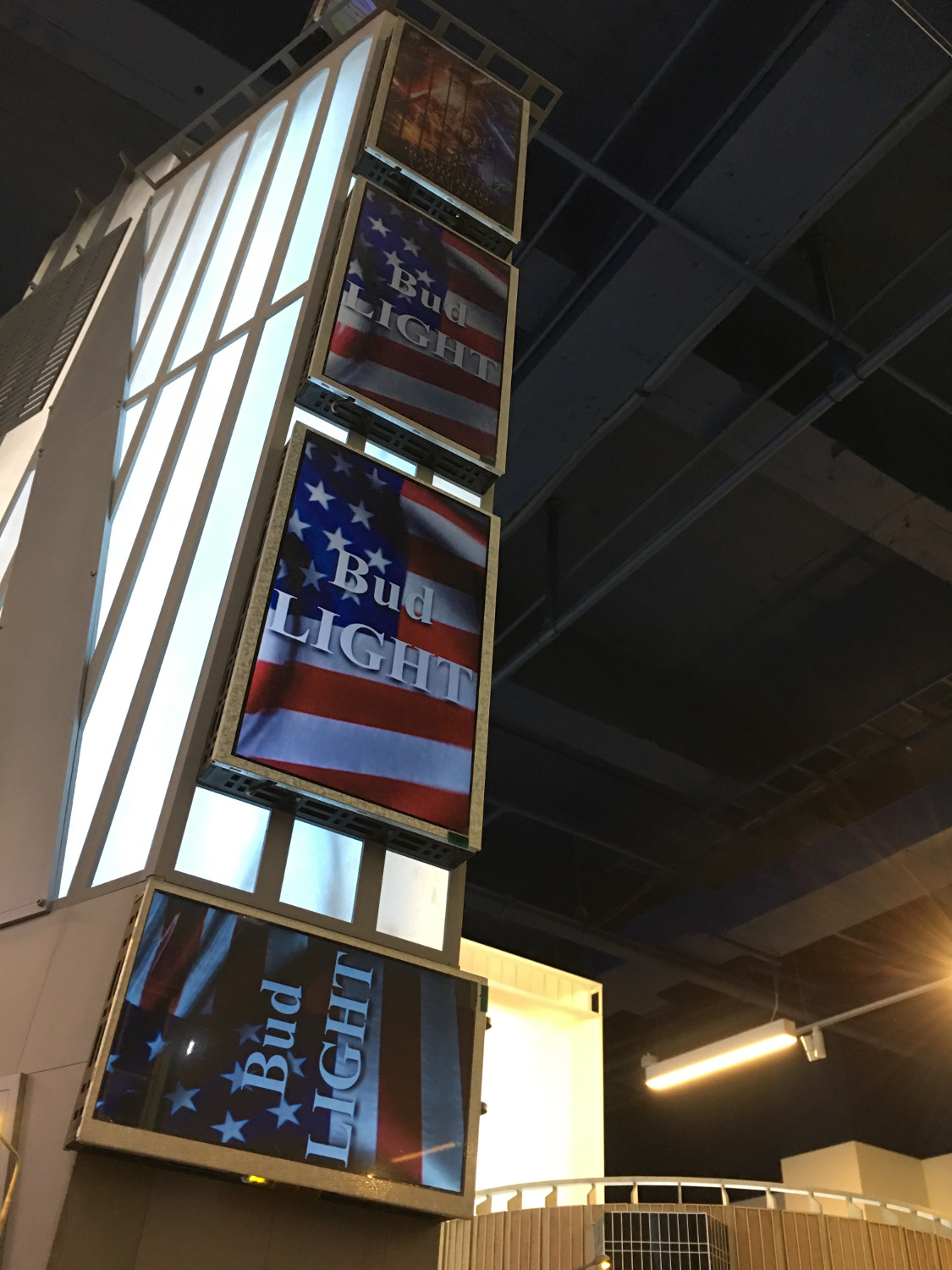