Keep your Raspberry Pi 4 cool and running smoothly with a thermal case. Gareth Halfacree investigates which one works best

Raspberry Pi 4 – like all the other members of the ever-growing Raspberry Pi family – is entirely usable as is, and plenty of people appreciate the aesthetic of a bare board on a desk.

For those who don’t, there are a wealth of cases – both first- and third-party – available. You’ll find one, the Raspberry Pi 4 Stand, mounted on the cover of this magazine, while the others in this group test can be found at all major retailers.

Each case here has been tested for aesthetics, complexity of assembly, and its performance in keeping Raspberry Pi 4 running cool.

Each case was given a heavy synthetic workload to represent a worst-case scenario. This workload, which stresses both the central and graphics processors, runs for ten minutes followed by a five-minute cooldown period. Full details of the workload can be found in The MagPi issue 88.

Made by Pimoroni from a single piece of acrylic, the Raspberry Pi 4 Stand is as pure as it gets (and comes free with issue 90 of The MagPi magazine)

The Raspberry Pi 4 Stand is about as simple as a case could possibly be. Laser-cut from a single piece of acrylic, there’s no complex assembly required: simply slot the stand between the Power over Ethernet (PoE) header and Ethernet port of Raspberry Pi 4 and pop it on your desk.

The stand is designed to improve cooling by aligning Raspberry Pi 4 vertically, rather than flat on a desk. Previous thermal testing in issue 88 showed this is surprisingly effective, and the Raspberry Pi 4 Stand solves the stability issue which comes from balancing the board on its edge. 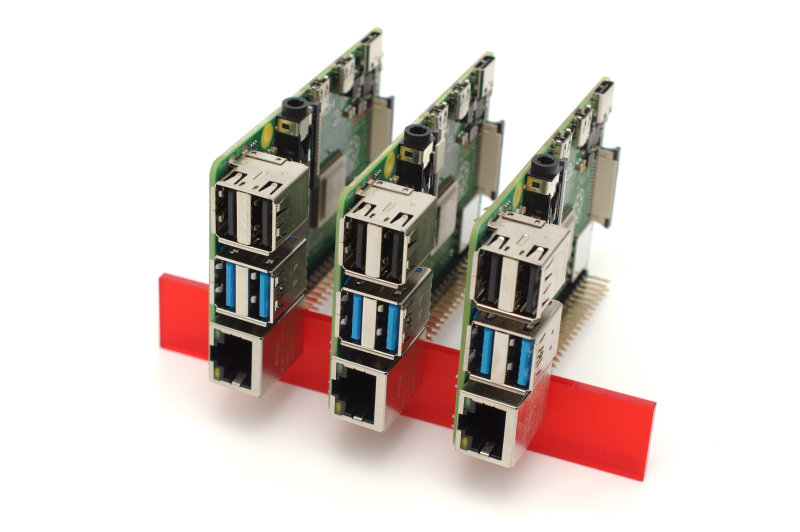 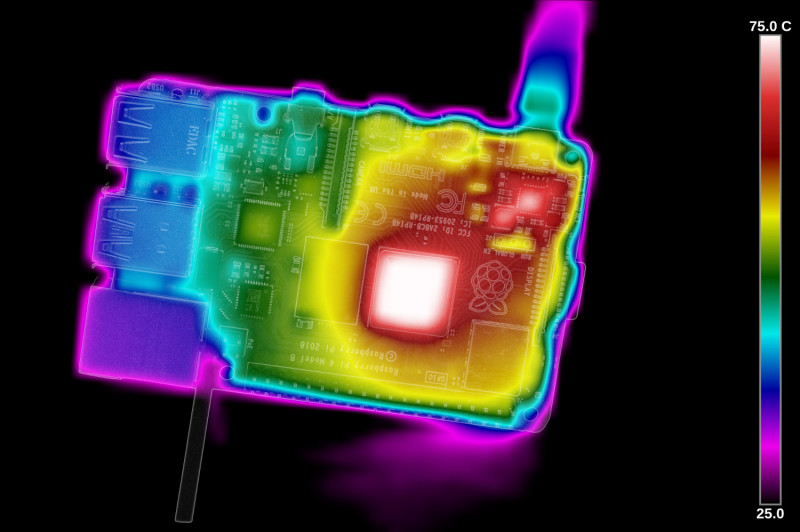 The Raspberry Pi 4 Stand is smart, free, and the only case on test to support more than a single board. Its cooling performance, though, is the weakest.

Note: We don’t score our own products. [We think our Raspberry Pi 4 Stand is perfect – Ed.]

Designed to blend in with home theatre products, the Flirc case is undeniably attractive

Created as a means of drawing attention away from Raspberry Pi 4 when used as part of a home theatre installation, the £16/$16 Flirc combines a matte-finish silver aluminium housing with soft-touch black plastic to the top and underside. It’s an understated design, but one which does compromise efficacy: the plastic lid covers much of the surface area of the aluminium case, reducing its ability to bleed off heat.

The case itself makes contact with Raspberry Pi 4’s system-on-chip (SoC) via a single hollow pillar and a bundled thermal interface material pad. Installation is simple, requiring only two protective sheets to be removed from the pad, and four screws to hold the case together.

For those not interested in attractive home theatre setups, though, the Flirc comes with a major drawback: it offers no ready access to the GPIO, CSI, or DSI headers, though all external ports are easily reached. 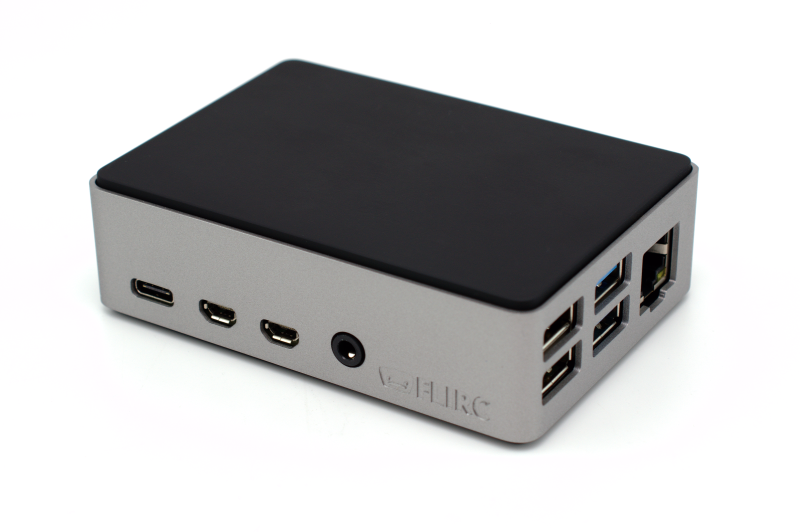 The plastic lid prevents the Flirc from cooling entirely efficiently, while the hollow pillar can be seen as a cooler spot to the centre-left. 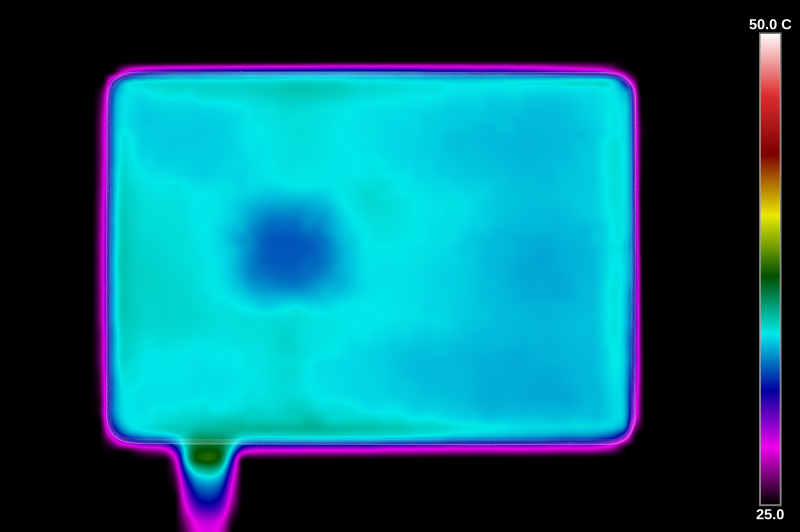 Even with the lid in place, the Flirc case easily cools Raspberry Pi 4 during the synthetic workload run.

Unless you need the GPIO, CSI, or DSI headers, the Flirc’s few design flaws are unlikely to matter: the case keeps Raspberry Pi 4 well clear of its thermal throttle point. 8/10

Argon One for Raspberry Pi 4

Impressively feature-packed, the Argon One offers a lot for your money – including temperature-controlled active cooling

The £19/$25 Argon One case packs a whole lot of functionality into a surprisingly small footprint. A daughterboard connects to Raspberry Pi 4’s AV and HDMI ports to re-route these to the rear of the case, alongside Ethernet and USB, while a second board pulls the GPIO header out to a colour-coded and silk-screen labelled header hidden under a magnetic cover on the top.

The same board powers a fan, which is active when the temperature exceeds a user-configurable limit, and includes a smart power button which can safely turn Raspberry Pi 4 on and off with a press. There’s even space to route out CSI and DSI cables for a camera or display.

Cooling performance is impressive. The Argon One prevented Raspberry Pi 4 from throttling without even needing to activate the fan – aided by the entire aluminium surface acting as a heatsink for the SoC and RAM chips. 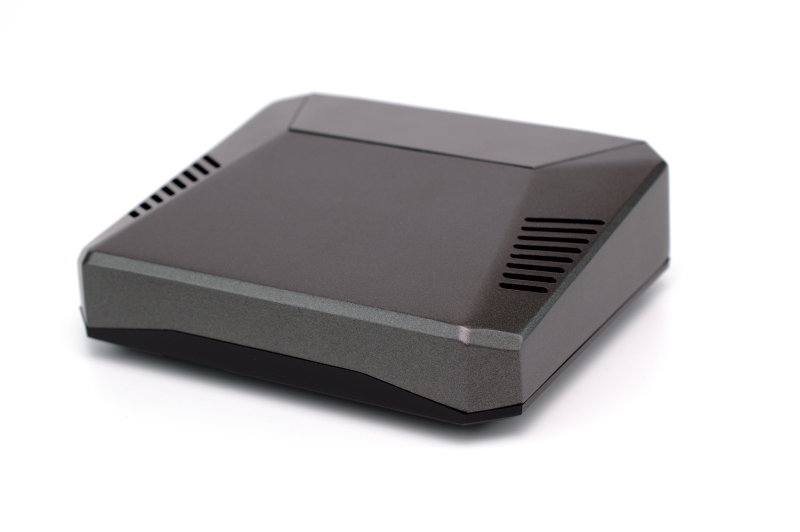 After ten minutes of heavy load, the Argon One didn’t even need to use its temperature-controlled fan once. 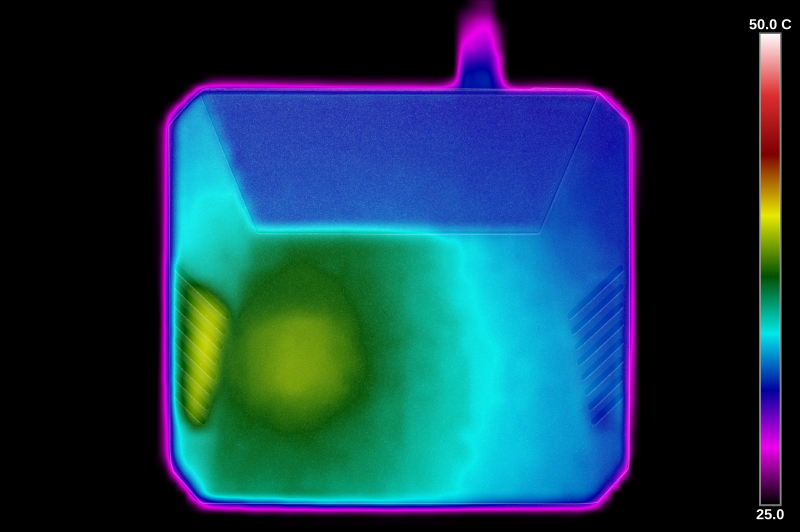 There’s little to fault with the Argon One’s design. Cabling is tidied, the GPIO header made more readily accessible, and there’s more than enough aluminium to keep Raspberry Pi 4 cool. 10/10

Featuring an open-source housing for a custom-milled heatsink, CooliPi is impressively extensible

The CooliPi stands out from the competition not just owing to its size and weight – it’s by far the heaviest case on test – but also by being at least partially open-source: while the custom-milled heatsink is available exclusively from Sensoreq, the plastic lower section can be printed on any 3D printer.

That’s only part of the story. CooliPi is a family of products, not just a case, and optional extras – some of which are also 3D printable – include a 90-degree adapter for Raspberry Pi 4’s GPIO header, a HAT mount, and even a housing for an optional 5V fan.

The latter shouldn’t be necessary outside the most extreme environments: in testing, the heavy heatsink of the CooliPi – which contacts the SoC, RAM, and USB 3.0 controller chips, with an optional copper shim available to cool the power management IC (PMIC) – was more than up to the job of cooling Raspberry Pi 4.

Having a very heavy aluminium heatsink lets the CooliPi absorb more heat than the competition.

The CooliPi’s large heatsink made it by far the best-performing cooler in the group. 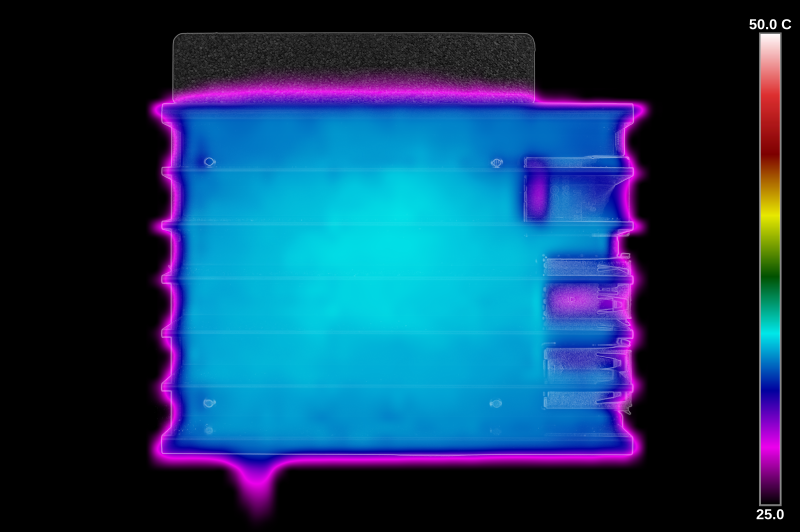 The CooliPi can’t be faulted on performance. Its price, however, is an issue: starting at £39/$52 for just the heatsink and case, it’s the most expensive product on test. 8/10

A relatively straightforward two-part design, this all-aluminium affair aims to provide cooling and protection without taking up too much space – its overall footprint is only marginally larger than Raspberry Pi 4 on its own.

There are a few issues, though, starting with its design. Like all aluminium cases, Pimoroni’s £12 ($13.20) heatsink case includes pillars designed to contact hot-running chips and transfer the heat to the outside of the case. The installation instructions, however, tell you to only add a thermal transfer pad to the one in contact with the central SoC. It turns out that this is because the RAM pillar targets a chip which doesn’t get hot, while the pillar for the USB controller is both too small and in the wrong place.

This, and a patchy anodised finish, aside, the case does as promised: it prevents Raspberry Pi 4 from throttling, and keeps all ports and headers – including GPIO, DSI, and CSI – readily accessible.

With so little metal to play with, the Pimoroni heatsink case gets noticeably warmer than the competition. 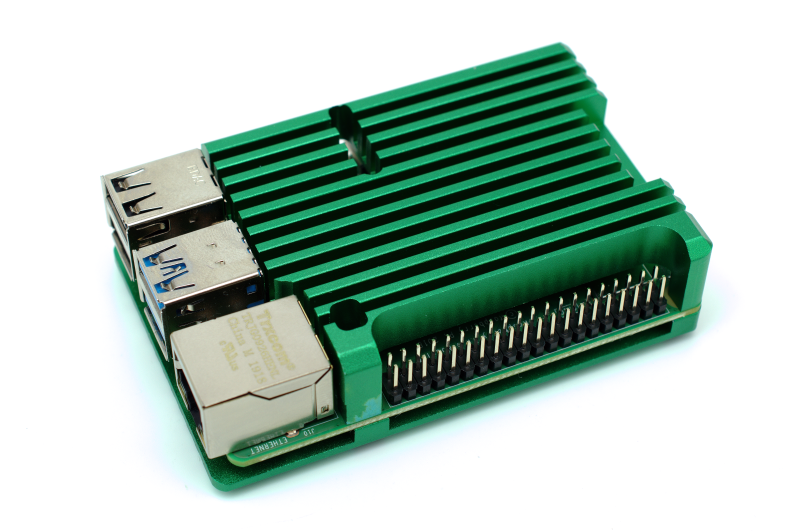 Even contacting only the SoC, the case keeps Raspberry Pi 4 well below its throttle point. 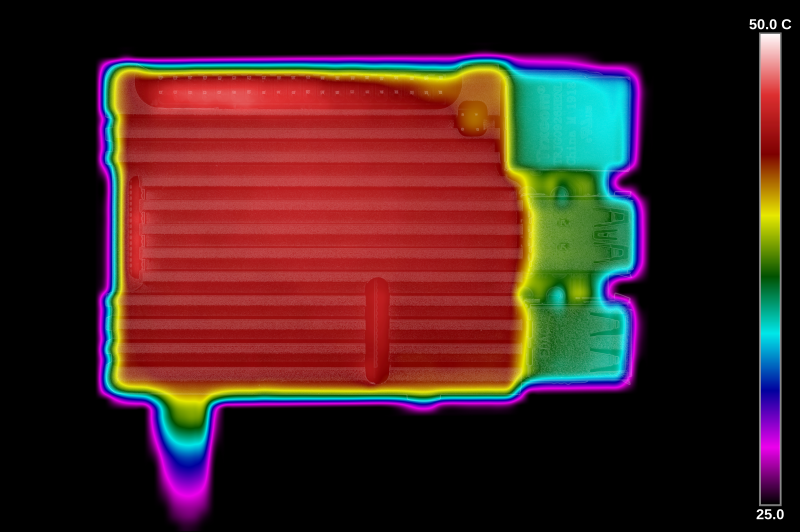 The Pimoroni Heatsink Case does an acceptable job of cooling Raspberry Pi 4, but feels like a missed opportunity. Fixing the USB pillar and adding one for the PMIC (power management integrated controller) would have been welcomed. 6/10

The Pi Hut’s £10 ($11) custom-designed Raspberry Pi 4 case comes in sheet form, laser-cut from a mixture of coloured and transparent acrylic. Assembly is relatively straightforward, though the plastic mounting pillars and screws provided can’t withstand repeated assembly and disassembly, and there are no thermal interface pads required.

Instead, cooling is provided by a single 5V cooling fan installed beneath vents in the transparent lid. By default, this is set to suck air out of the case and away; flipping it around to blow offers a minor improvement in cooling performance at the cost of a dramatic increase in noise.

There’s no software or speed control for the fan, and it ties up the 5V and GND pins on the GPIO header – which is inaccessible once assembled. The CSI and DSI headers are likewise locked away, though cables for these can at least be routed between the walls and the case lid. 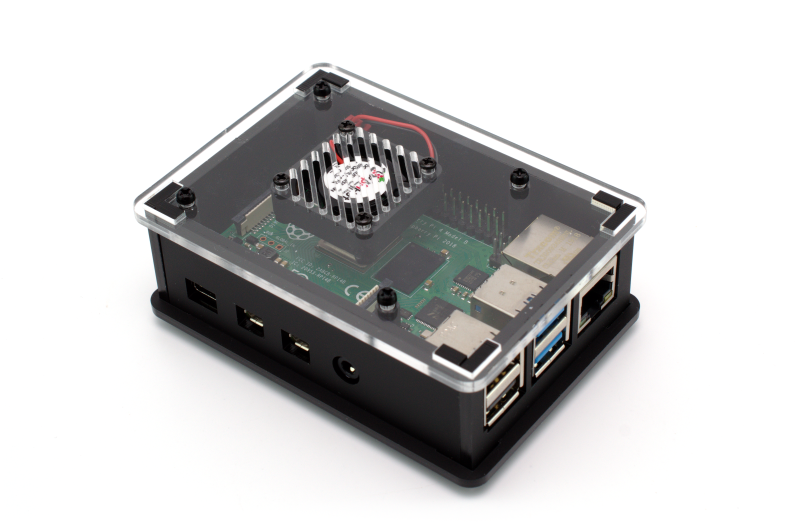 The acrylic lid effectively insulates Raspberry Pi 4, leaving the fan vent as the only place for heat to escape.

Despite its fan, The Pi Hut case’s cooling performance is the second-worst on test – behind only the Raspberry Pi 4 Stand. 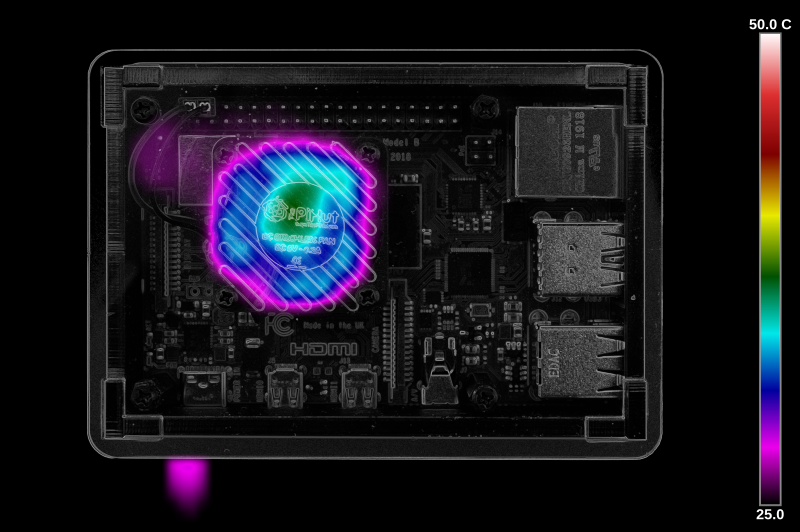 The Pi Hut case is a cheap option. Despite including active cooling, it fails to outperform any of the passive options on test – bar only the in effect uncooled Raspberry Pi 4 Stand. 4/10

And The Winner Is...

Thermal performance isn’t the be-all and end-all of choosing a case for Raspberry Pi 4 – in fact, as our testing in issue 88 proved, under most real-world workloads Raspberry Pi 4 is more than capable of handling itself. It’s little surprise, then, to find every case on test – except the Raspberry Pi 4 Stand – passed the demanding thermal throttle benchmark with flying colours.

What is perhaps surprising is the variance within the tests. The Pi Hut case’s fan isn’t as effective as passive options like the Pimoroni Heatsink Case and the Flirc – and while the CooliPi is the best performer overall, its high price and bulk make for a difficult case to recommend for most use-cases.

Under real-world conditions, any of the cases – including the Raspberry Pi 4 Stand – should prove more than adequate to prevent thermal throttling. Only those operating Raspberry Pi 4 in relatively extreme environments need worry about cooling – and there’s nothing wrong with picking your case based on features, accessibility, price or aesthetics instead, opening up the whole group as potential winners depending on personal taste and budget.

The Argon One ticks almost every box: it’s attractive, includes a wealth of features, cools well, and won’t break the bank.