Asked to create ‘something amazing’ for the entrance of Boulevardia, a two-day music festival, the team at Dimensional Innovations didn’t disappoint. They built this giant guitar you can play.

Boulevardia is Kansas City’s two-day music, food and beer event, this year drawing crowds to the historic Stockyards District. When tasked with making something ‘amazing’ to be situated just inside the entrance to the event, the team at design firm Dimensional Innovations “wanted to create something iconic, interactive, and engaging.”

Although the idea of a 12 ft (3.6 m) tall electric guitar wasn’t the first concept to grace their ideas board, it was the one that stuck. And soon afterwards, the team got to work designing both the internal electronics and external aesthetic of the build.

Here are some quick facts about the giant guitar:

“Honestly, I didn’t know if we would be able to make this happen,” explains Chris Riebschlager, Lead Software Developer at Dimensional Innovations, “but I was smitten with the idea, so I pitched it to the team.” Once the idea was green-lighted, Chris finally had an excuse to use the Bare Conductive capacitive touch board he’d been coveting as a maker, and they got to work on a prototype.

The plan was to use 16-gauge galvanised wire as the conductive material connected to the board, allowing the team to assign a WAV sound file to each wire. ‘Strum’ a wire and the board would register the connection and task the Raspberry Pi with playing back a specific note. A simple enough idea, and one we’ve seen countless times using fruit and tin foil – but for a 12-foot guitar, there was a little more work to be done.

Chris originally attempted to source his guitar note WAV files from an electric guitar, but finding the sound to be “inconsistent and weird”, he decided to instead take the pre-existing sound files from GarageBand. Still not content with the prototype, the team moved on to incorporating arcade buttons linked to the GPIO pins, allowing the user to select a specific chord before strumming the strings. The Python code would then determine which sounds to play, and for how long, based on the user interaction with the strings and buttons. 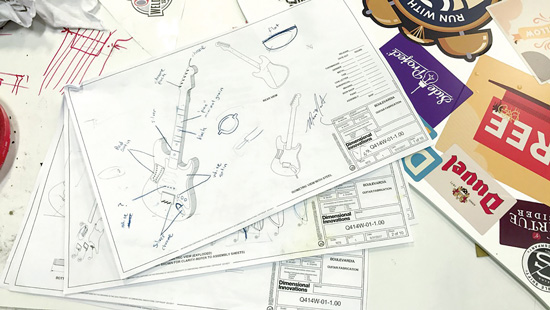 Turning to the design team for help with the guitar body, the team created an authentic-looking set of stickers, each depicting breweries and bands taking part in the event. These were then printed for inclusion on the MDF and steel body of the instrument, all put together in-house by the awesome engineering team.

The final piece was installed inside the entrance to Boulevardia, and received overwhelming reactions from all attendees to the event. “This project was without a doubt one of the most exciting, challenging, and rewarding projects I’ve been a part of,” continues Chris on his blog entry for the build. “From concept to execution, the entire project took only five weeks. The fact that we pulled this off in so little time really speaks to the talent and dedication of the people I get to work with.”

If you happen to be in Kansas City, you can visit the guitar at the Dimensional Innovations shop, where it sits proudly on display for visitors to play – a constant reminder of what can be achieved with a little hard work and a great team. 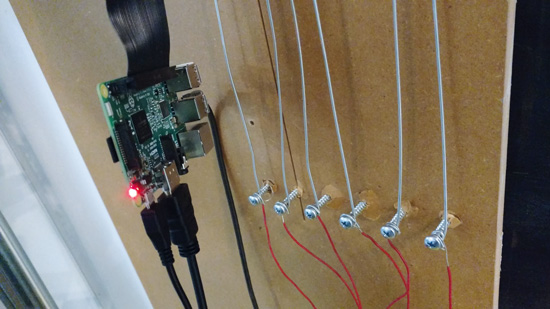 A Bare Conductive board recognises capacitive touch via 16-gauge galvanised wires running down the body of the guitar. Each touch triggers the playback of a specific WAV file.

Arcade buttons connected to the GPIO pins allow users to select different chords as they play. They also allow the guitar chords to sound ‘dirty’ or ‘clean’, depending on how rock ‘n’ roll the user wishes to sound.

The body of the guitar is built from steel and MDF, the latter shaped by the engineering team at Dimensional Innovations using a CNC router. Stickers representing performers and other participants in the event adorn the completed orange body. 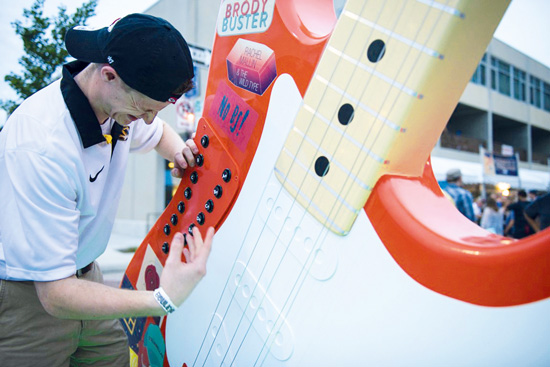