The FM Touch Synth is a touchscreen synthesiser that offers a wide variety of stunning sounds, modified using a combination of rotary knobs and touchscreen control.

Not long after impressing us with his Raspberry Pi Looper ‘synth drum thing’, Toby Hendricks (also known as Otem Rellik) is back again with another Pi-based musical device.

“It went through several iterations before I settled on the final design,” Toby tells us. “The original idea was to have two touchscreens for two-voice polyphony, but that ended up being a bit too large, so I went with one.”

While a Teensy 3.6 board is used to handle the control data, all the audio – created using a combination of FM and subtractive synthesis – is processed in Pure Data on a Pi Zero. “This was my first project using the Zero,” says Toby. “I just wanted to see if I could run a somewhat simple Pure Data patch on a Zero without any audio glitches (and it turns out I could). Size was definitely a factor: I wanted to make a really slim, sleek instrument.”
Toby says the Pure Data programming language is easy to use. “Once you learn the basics, you can do so much with audio and MIDI. It’s a visual programming language, so instead of writing code line by line, you create objects and start connecting patch cables. It’s great if you are coming from a non-technical perspective because everything is so easy to understand visually.”

While the synth’s rotary knobs are used to control aspects such as attack, release, frequency modulation, detune, and delay, the main input interface while playing and creating new sounds is the touchscreen overlay. Columns of RGB LEDs placed beneath it depict eight notes (the scale of A minor), while the position of the player’s finger modifies the sound produced.

Rather than displaying information on a regular touchscreen, Toby opted to use LEDs for everything, including menus. “It’s a bit more archaic and cryptic. I like to make instruments that you really have to learn to use, and aren’t immediately super-accessible. Sort of like the old hand-held video games I grew up with.”

One drawback is that the resistive overlay can only handle one touch at a time, although a workaround involves sustaining notes. “I added the sustain feature close to the end of the project because I wanted polyphony. The synth just sounds so massive when you play it polyphonically. Perhaps in the future I’ll upgrade the screen to allow multitouch.”

Toby has already used the FM Touch Synth in live performances. “It’s working out great! I’ve been doing a lot of ambient jam sessions with it, turning the delay way up and feeding into my Pi Looper. It’s been a lot of fun.”

Toby would really like to make the synth available commercially, which is why he hasn’t released the code yet, but he’s already working on another Pi Zero project: “a looper in which you can manipulate the pitch and speed of the loop in four different slots.”

The wooden case was Toby’s first project using his new CNC machine. It houses the components, including the matrix of RGB LEDs that sit under the touchscreen overlay. 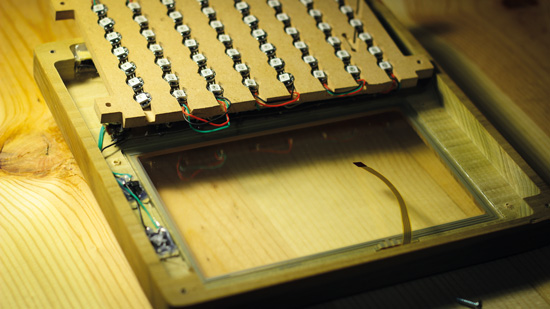 Eight rotary knobs and the touchscreen overlay are wired up to a Teensy 3.6, which sends control data to the Pi Zero and also handles audio output. 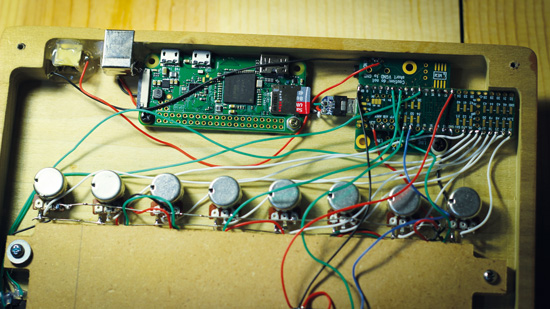 All the synthesiser sounds are processed on the Pi Zero using Pure Data, a visual programming language in which objects can be created and linked together. 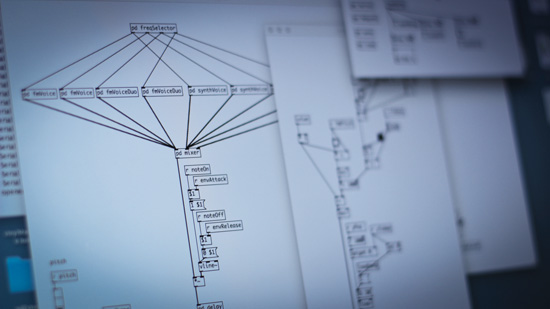