Eltechs’ ExaGear Desktop for Raspberry Pi 3 is a virtual machine that allows you to run applications designed for standard x86 processor architectures on the Pi’s ARM CPU. It’s limited to 32-bit (x86/i386) software, and running a VM can’t magically increase the Pi’s limited processor power, but we were pleasantly surprised by its capabilities.

We used ExaGear’s default Debian 8 guest OS (it can also host Ubuntu 14 and 16). This provides instant access to a wide range of x86 software via Debian’s standard repositories. We were able to quickly and easily install popular programs including Spotify, Dropbox and Steam, as well as compiling software from source.

Spotify was slow to load, but worked perfectly once it started up, turning our Pi into a capable streaming jukebox. The Steam client will run, but that doesn’t mean you'll be able to use most of its games and features. We installed a few games from our collection, including Osmose and World of Goo, but performance on both was sluggish and unsatisfactory. We had better luck with classic games from GOG.com, such as GOG’s pre-packaged Linux x86 versions of Eye of the Beholder and Loom.

Using Wine, we were able to install a surprisingly wide range of Windows software, although we were once again limited to 32-bit programs. Turn-based RPGs and strategy games are good choices here, as the gameplay isn’t particularly sensitive to lag.

Eltechs provides online guides to setting up games including Arcanum and Fallout. Fallout worked well, but slowly, after we tweaked its graphics settings. We were pleased to find that much-loved text editor Notepad++ also worked beautifully, as did Microsoft Office 2003. 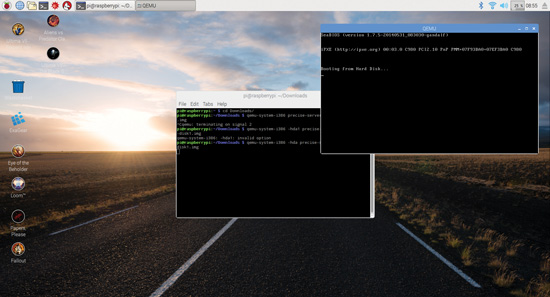 ExaGear is particularly handy for old-school gaming enthusiasts, as the Pi’s limited processor power, graphics capabilities, and memory are best suited to titles from the mid-90s to mid-2000s. While many tools for playing older games have native Pi implementations, ExaGear makes it easier to use modern, legally available installers from digital retailers like GOG and Steam, while Wine provides support for early Windows titles.

Helpfully, if you want to be sure that ExaGear can run a specific piece of software, there’s a free three-day trial available, so you can try before you buy.

ExaGear is worth its lifetime price if you need a specific piece of x86 software, or simply want the widest possible range of applications available to tinker with.