The Raspberry Pi isn’t quite capable of performing complex brain surgery (at least not yet), but that doesn’t mean it can’t help scientists work out how our minds are wired. So when a group of researchers looked for a low-cost way of conducting studies in neuroscience, they turned to our favourite computer. The result is a machine with the potential to make ground-breaking discoveries about common human behaviour. And its secret ingredient? A load of flies, of course.

This article was written by David Crookes and appears in The MagPi #65.

Dr Giorgio Gilestro and his colleagues from Imperial College London have used the Raspberry Pi to create what they call an ethoscope: a device that can not only track animal behaviour using open-source hardware and software, but profile it using machine learning algorithms. They use fruit flies within their studies because they are similar to humans in genetic and behavioural terms: they can be used to study mental and physical human diseases and give insights into sleeping and socialising.

But instead of manually watching the flies and scoring their movements, as has been the case in the past, the Pi-based ethoscope is able to process and analyse real-time video. In doing so, it allows scientists to automate such time-consuming processes. “We can also study hundreds or maybe thousands of flies at once because [the ethoscopes] are so small and cheap to maintain,” explains Giorgio. “By using the Pis, we have enough computer power to analyse their behaviour using video imaging and we can be wallet-friendly at the same time.” 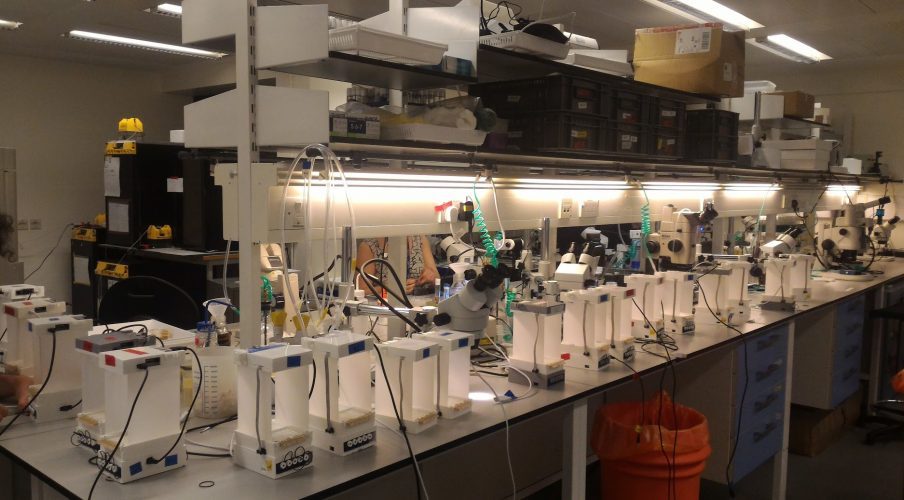 At first, the group used USB webcams connected to desktop computers running software that would analyse the behaviour of the flies being filmed. “This was very accessible because almost everyone has a computer and a webcam, but it wasn’t very scalable or user-friendly,” Giorgio says. “There was also an issue of people running the program on different computers and hardware.” Using the Pis got around this problem and the scientists, led by PhD student Quentin Geissmann, eventually came up with a scalable device.

After deciding to use a 3D-printed modular design for the body of the ethoscope, they were able to place a Raspberry Pi on top, connected to a downward-facing camera. The idea was to film a ‘behavioural arena’ at the bottom, filled with flies and lit by an infrared LED.

Eight behavioural arena decks have been created for research into areas such as feeding, sleep patterns, and decision-making.It’s certainly proving to be revolutionary (“it’s been very well received in the community,” he adds) and because the ethoscope is open source and the full instructions are online, it’s been quick to take off. In actual fact, there is already talk of future iterations. “It’s almost like a commercialised product,” Giorgio tells us.