Green in more than one sense, the E-ink Display Project is both a useful tool and a rather fetching piece of art. Nicola King admires this ingenious piece of creativity

Did you know that e-ink displays can retain what they’re showing, even without electricity? By anyone’s standards, that makes them pretty ecological. The E-ink Display Project, developed by Anke Dietzen, is a resourceful and inventive take on a very cool way of displaying information.

The project’s origins came through reading an article about the Raspberry Pi, as Anke explains: “I thought ‘how cool is that?’, and I wanted to do something with the Raspberry Pi. I ordered [one] and, very enthusiastically, a big sensor kit. As I had no knowledge of electrical engineering, I had to learn some basics and I was very happy then to light a diode on a breadboard.”

At the same time, Anke bought a small Waveshare e-ink display, which she favoured for its very clear and precise visuals. Armed with her new purchases, she set about coming up with a practical display that would also look good. “I wanted to do something with e-ink displays which I thought should be at least a little useful,” she tells us. “As, in the morning, I normally check the weather via smartphone, I thought it would be nice to read the latest weather information and calendar entries / birthdays with just one look.” 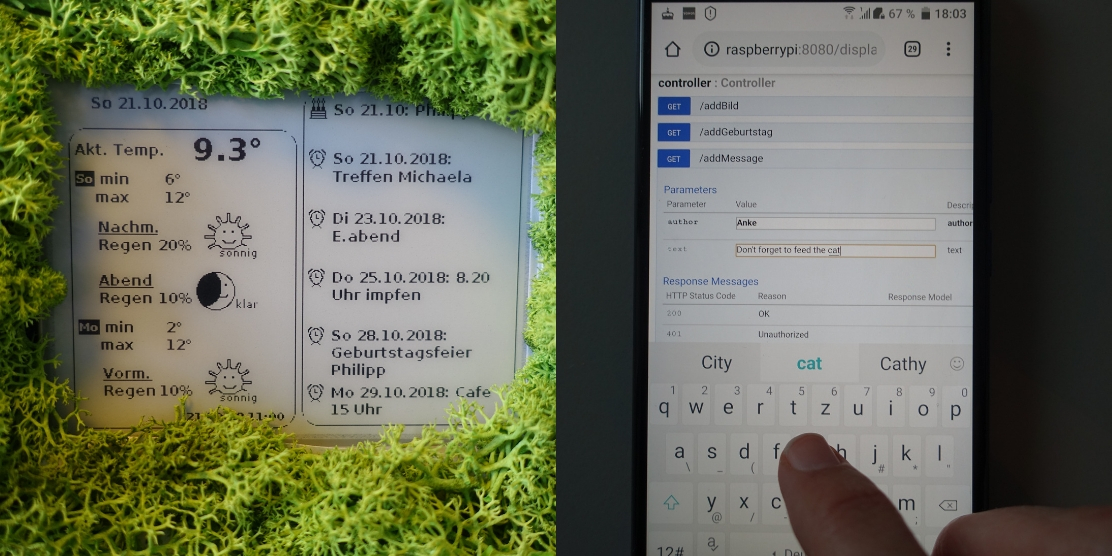 As well as including informative data such as forecasts and reminders, Anke wanted the possibility of having images on the screen, so, “I used a bigger three-colour display (7.5-inch – 640×384 pixels) for showing pictures. The picture shown was always taken in the same month of the actual date, in the style of ‘do you know what happened X years ago at this time?’” she says. In addition, she describes the key benefit of using an e-ink display: “If you disconnect [it] from power, the Raspberry Pi will keep the last picture forever, unlike the ‘normal’ displays which need power to show something. The power consumption is very low in standby mode.”

Being familiar with Java, it was natural for Anke to use it to code the project. “I first had to transfer the Python driver logic provided by the e-ink display producer to Java.” She then spent some time figuring out how to get the Raspberry Pi to control two e-ink displays at the same time.

Aesthetically, the finished project is calming to the eye. Anke used some artificial moss to give it a very organic feel and, with it hanging in the kitchen of her home, the feedback that she has received from other members of the household has been, unsurprisingly, very positive. Charming, functional, and eco-friendly, it makes a refreshing change from the more mundane pinboard or sticky note!

> The displays are controlled by a single Pi on the rear

> The display can be controlled via a webpage

> Custom messages can be entered

This story is an excerpt from The MagPi magazine Issue #77. Interested in regular updates from the world of Raspberry Pi? Become a subscriber.