Zoetropes were invented by a mathematician called William Horner in 1834 and they proved to be an effective way to produce animations. A set of still images would line the inside of a rotating drum, and viewers would peer through narrow slits in the side. The speed at which they passed the eyes would produce an illusion of movement. As the years went by, the technique was refined and zoetropes remain as much fun today as they did nearly 190 years ago.

As if to prove the concept still has legs, Brian Corteil has created his own version. “I’ve found zoetropes and optical illusions fascinating since I was a child,” he tells us, having worked on his latest one for a recent EMF Camp in the hope of inspiring children at STEM/STEAM events. “They’re perfect for showing how persistent vision works and I love playing with old and new technology, combining them into an art project.”

Brian’s previous attempt made use of twelve OLED displays, each displaying a different still from Eadweard Muybridge’s photographic studies of a galloping horse taken in 1878. “I’ve used his images on several occasions for my projects,” he says. “If you reduce the number of pixels, even to a 16×16 LED matrix, you can still see the details of a rider on a horse. They’re ideally suited for displaying on a zoetrope.” 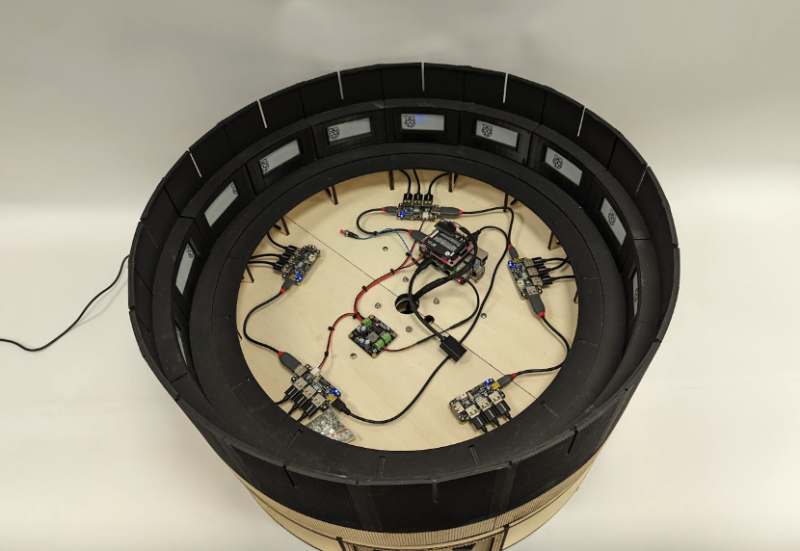 His first digital zoetrope was not interactive, however, and it needed to be spun by hand. “The OLED displays also required a custom PCB designed to be linked together as a distributed shift register,” he says. But although the displays could be updated via a connected Raspberry Pi computer, the results weren’t perfect. “When the zoetrope was spun, a dark diagonal line was visible as the OLED displays were being refreshed.”

The answer, he surmised, was e-ink displays. “They overcame the issue by not needing to be refreshed to continue displaying a static image,” he adds. “I also liked how e-ink displays mirrored the look of paper.” For these, Brian used 15 Pimoroni Badger 2040s – fast updating, programmable badges with e-ink displays that utilise the RP2040 microcontroller. He also used a Raspberry Pi Pico board to control the motor that spins the zoetrope. It monitors the safety emergency stop buttons too.

Brian designed the zoetrope using the CAD program SolidWorks, creating outlines to be laser-cut from 3 mm and 5 mm plywood. Parts that couldn’t be made this way were 3D-printed, and the device was made large enough to accommodate the Badgers and their USB leads. “Some of the challenges involved making the zoetrope light enough to be able to move,” Brian says. “It also needed to be carried by one person, and robust enough to avoid being damaged by the public.” 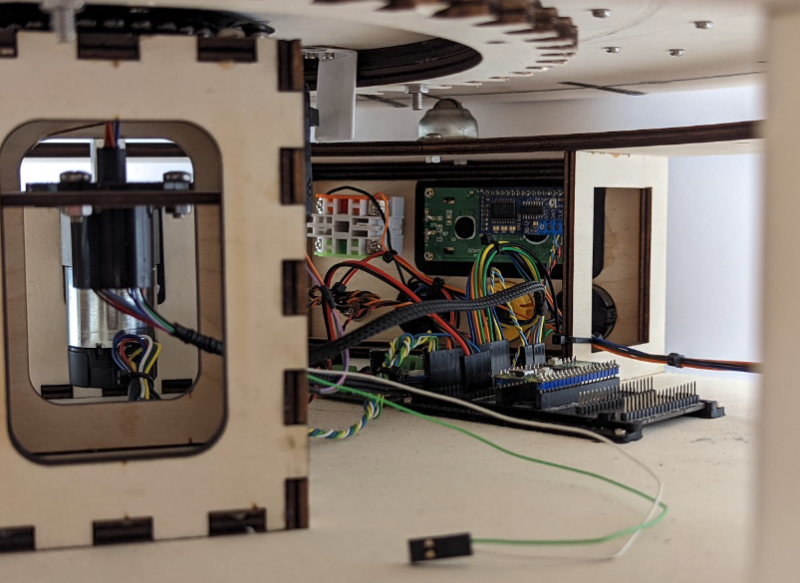 To control the entire device, Brian employed a Raspberry Pi 4 computer, using it to send screen updates over the USB connections. Another Raspberry Pi 4 is connected to a flatbed scanner and it allows animations created on a cell sheet to be scanned and uploaded to the zoetrope. This means kids can get creative at events – or else press a touchscreen monitor and see past animations!

“The zoetrope has gone down a storm with children, and I’d like to thank Pimoroni for supplying me with 20 Badgers, Phil Howard, software developer at Pimoroni, for creating the custom firmware that enables images to be uploaded, and Brian Starkey for his help pasting together my code and knocking out a web user interface. This project would not have been possible without the support of the EMF art installation fund either.”