It's been just about two weeks since the launch of The MagPi issue 40. We've had such a huge influx of subscriptions we've had to dedicated an entire print run to ensure everyone gets their copy!

That means the only guaranteed way to get a copy of issue 40 and your free #PiZero at the moment is via a subscription. 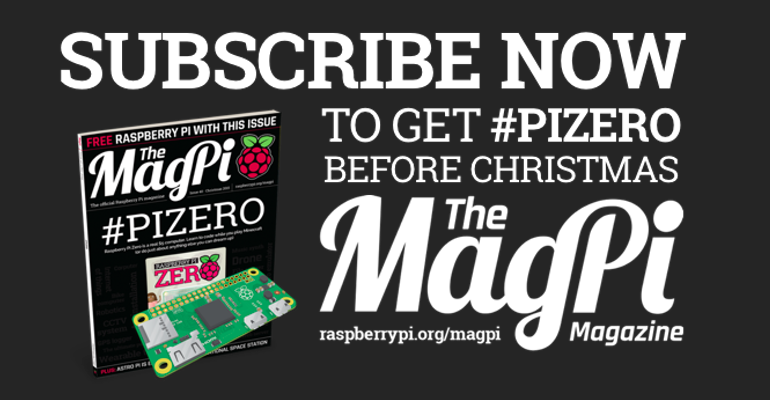 If want to subscribe to get a copy of issue 40 and get it before Christmas (postal service willing!), here are the cut-off dates:

This isn't a guarantee, but it does leave lots of leeway for the postal service to get it out to you.

If you've already subscribed your copy is already at the top of the queue and you'll get it before Christmas!

We've also got a bit of bad news for our American readers. If you've asked us in the past two weeks when copies of 40 were hitting Barnes & Noble, we have been telling you they should start to appear a week before Christmas.

Unfortunately, that's no longer the case.

It turns out we were given some bad information on the delay between UK and US release, and the magazine will be in Barnes & Nobles later than expected. According to our suppliers, they'll be in stores all across the US by 12 January 2016. While issues will be turning up a little earlier on the East coast, it does mean they won't be hitting stores before Christmas in America.

All we can do is apologise. We're devastated that you all can't get go out and buy our Christmas issue for Christmas as planned, however we can tell you that we'll be printing copies in the US quite early in the New Year, so the delay between UK and US release will be next to no time at all!