You want to build a robot without breaking the bank. Let’s see what parts we need, where they fit, and how to keep the cost down

To make a robot, be it a wheeled rover, flying drone, factory robot, or autonomous spacecraft, you will need common classes of components. We’ll discover what they are for, focusing on those needed for a wheeled robot.

We’ll look at what options there are for the components, and how we might be able to save money. We’ll go through the trade-offs needed for these options, the tools you might need, and their relative difficulty.

This article was written by Danny Staple and first appeared in The MagPi 84. Get a free Raspberry Pi computer with a 12-month subscription to The MagPi.

Danny makes robots with his kids as Orionrobots on YouTube, and is the author of Learn Robotics Programming.

Any robot starts with a computer to run code, using sensors to collect data about the world. There are output systems to drive motors and actuators to affect the world. It needs power systems to get the right voltage and current to the right parts. The robot will need mechanical parts for the motors to drive, along with connecting the sensors and a body holding it all together.

An overview of robot parts

To make a wheeled robot, you are going to need some common part types to make it work:

You can pick up most of the parts for a low-cost robot with a kit. See Build a robot with CamJam EduKit 3 for more info.

Here are some other kits

To go low-cost, you going to have to be a little creative. This will mean substituting parts, or finding parts that may not be the obvious choice.

You will be able to save by shopping around, and waiting for parts that will take longer to ship will usually reduce cost.

Having parts pre-soldered or ready-made usually adds quite a lot to their cost, so be prepared to solder things together for the electronics, and to bodge or repurpose things for the body.

Robots can be made of anything, although we’re not advocating it; we’ve even seen a robot made with vegetables for a body and wheels.

Tip! Get creative and repurpose

Be on the lookout for unused brackets and plastic shapes that might be handy to use in robot builds.

The robot needs a Raspberry Pi to run your code. How would you save here? Well, the first cheapest Raspberry Pi is the one you already have! Make sure it’s one with wireless LAN and a 40-pin header if you can (Raspberry Pi 3, 4, and Zero W models are all good choices).

Our favourite low-cost, and low-space, option is Raspberry Pi Zero WH. This is the smallest model, with wireless LAN and a GPIO header pre-soldered to the board. Since a robot isn’t often connected to the screen, the lack of DSI port shouldn’t be a problem. If you have a Raspberry Pi Zero W, then soldering pins to the GPIO header is a fun project.

Choose a chassis or body

The chassis holds the robot together. It’s a fundamental decision on how your robot is made. Options for a wheeled chassis are:

A good first robot is option two, the lunchbox robot. It’s a good compromise of saving cost and complexity, it’s fun, and has a little bit of character. So that’s what we’re making here. 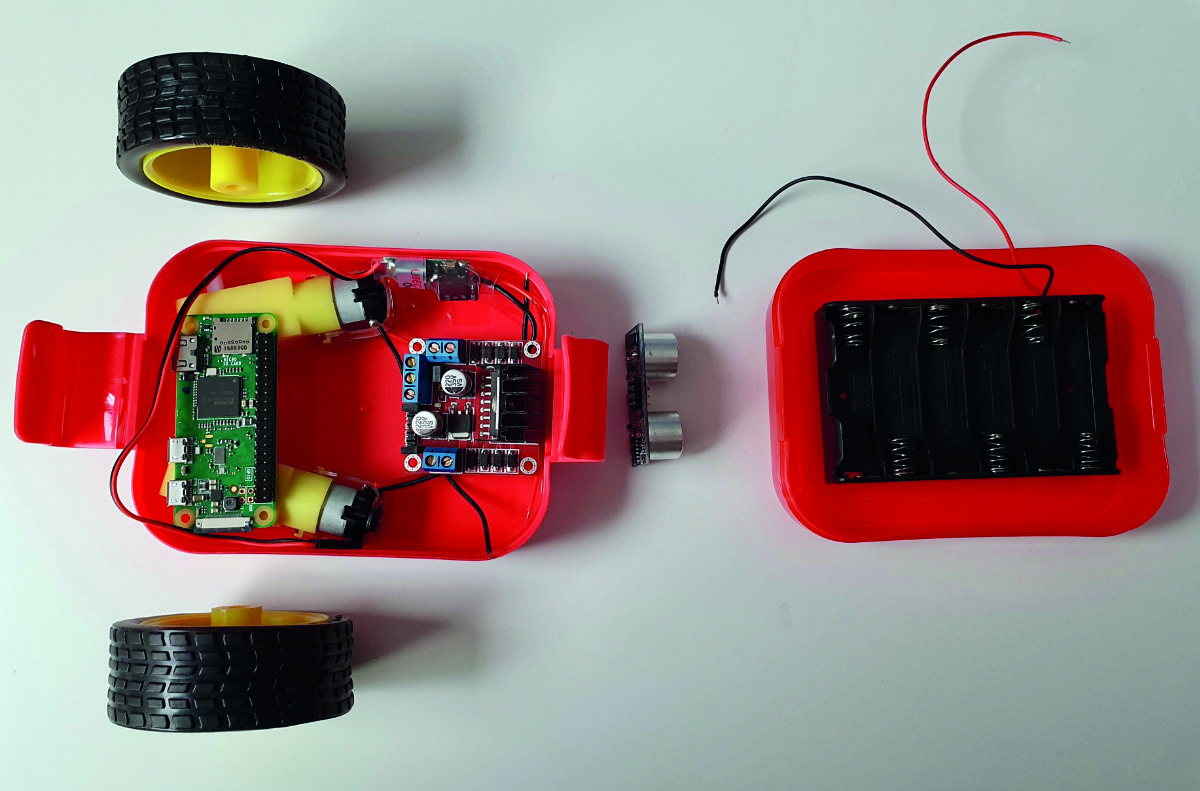 Robot wheels. Not reinventing the wheel

Drive wheels will be attached to your motors. For a low-cost robot, two driven wheels is a good number.

Unless trying to make experimental robots, plastic wheels with rubber tyres make the best drive wheels and are cheap and readily available.

Making your own is possible, but inadvisable. Instead, we recommend buying plastic wheels with tyres (search for this phrase with ‘robot’), available for less than £5, and often with the motors for not much more.

A castor wheel, ball, or skid is mostly on the robot to balance it, without causing too much friction. You can get away with a simple bottle lid facing down here or, for a better cheap hack, half a ping-pong-ball. You can buy robot castor wheel or roller ball assemblies for under £2.
The important thing is that this component does not introduce friction, and can easily be attached firmly to the robot.

What kinds of motors are there?

Buy motors with a gear ratio above 40:1. Although they’ll never match perfectly, get them in pairs, as motors that look similar may not have the same speed.

They come in plastic and metal geared flavours. Metal tends to last longer but cost more. Plastic gear motors are cheaper, but larger and not as sturdy. In most of our robots, plastic motors are fine.
90-degree motors fit better in a limited space. Ensure the axles match your wheels. Adapting axles adds complexity and cost.

Gear motors can be salvaged from an electronic toy like an RC excavator or tank.

This connects your Raspberry Pi to the motors. Ensure it can control DC motors. 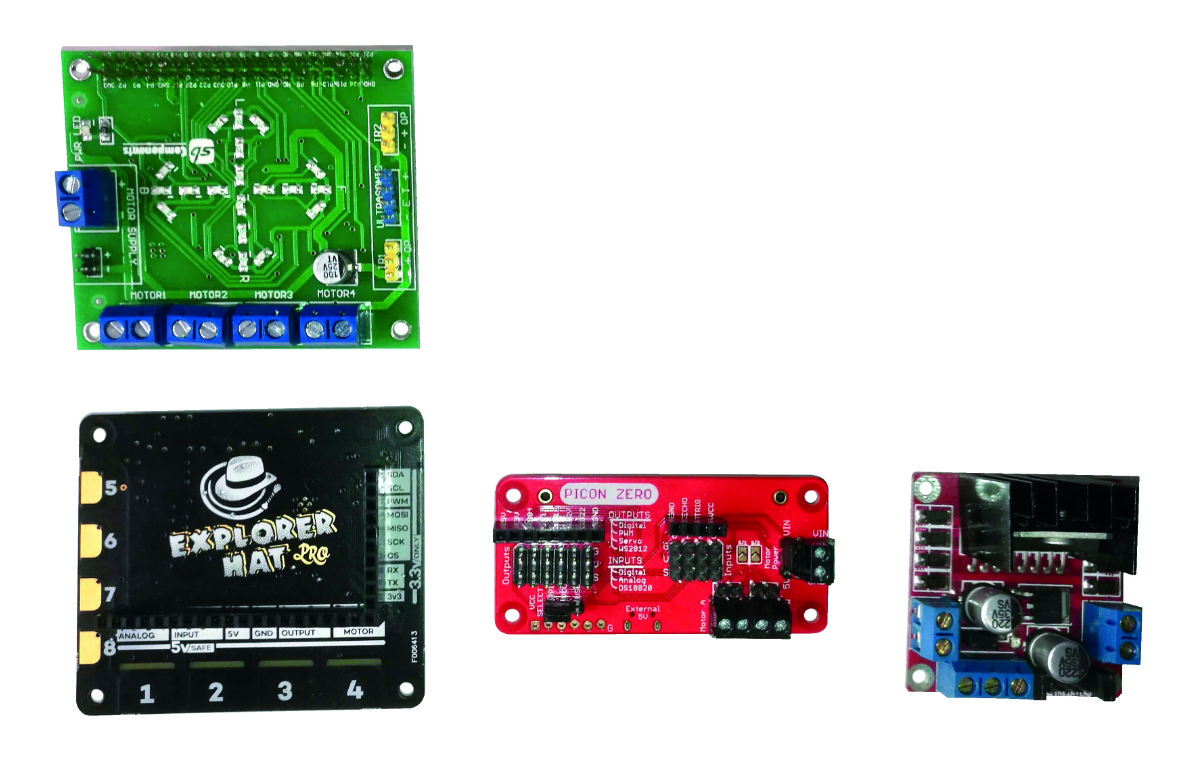 Power up your robot

Robots need power for the motors and electronics. A Raspberry Pi needs a smooth 5 V to run, with upto 3 A capacity. Motors introduce noise that could interfere with your Raspberry Pi.

Add sensors to your robot

For more interesting code, a robot needs sensors to detect things. Those that don’t require extra conversion will save space and a little money. Be prepared to solder on headers.

Prices on robot parts vary by up to ten times. Swap words like board for module, and robot for Arduino, in your searches.

For fasteners, the ‘standoff kits’ found online are great; get a selection of M2, M2.5, and M3 including the bolts, nuts, and spacers.

The best way to keep costs down is to borrow tools – if you have a local hackspace, makerspace, or can talk to a college about using their facilities, you won’t need to buy all these tools.

This is the first part of a series of tutorials in which Danny shows us how to build a low-cost robot. Subscribe to The MagPi to get the next installment in print, or sign up to our newsletter for the free digital edition direct to your inbox.