We love Raspberry Shake here at The MagPi. This geology project kit uses a powerful geophone sensor attached to a Raspberry Pi to detect earth tremors.

The geophone converts ground movement into voltage; this analogue signal is then converted into a digital read-out (by the Raspberry Shake board) and the data is stored on Raspberry Pi.

Raspberry Shake is a great project for budding geologists and citizen scientists because it’s relatively simple to assemble (although you do need to be careful to handle and level the parts correctly).

Once built, it’s low maintenance, sitting in a quiet part of your home or office, waiting for the earth to move. And all that time, Raspberry Shake is gathering data, which you can investigate using the new web interface – or you can dive in and play around with the data directly.

We interviewed Branden Christensen, CEO of Raspberry Shake and seismologist, back in 2018. You can also find a tutorial in The MagPi issue 60.

This month we’re looking at assembling Raspberry Shake and sharing your data with the wider Shake community.

You can buy all the parts for Raspberry Shake separately (see the ‘You’ll Need’ info) or pick up a turnkey system with all the parts included. You can even buy a fully assembled system, but we think that takes all the fun out of things.

Step 01: Wire up the geophone

Start by wiring up the RGI-4.5Hz geophone. Ours has two wires: grey and blue. Make sure the wires are twisted and connect the grey cable from the positive ‘+’ connection on the geophone to the ‘+’ pin on the RS1D Raspberry Shake board. Next, connect the blue wire to the ‘-’ connection. Take care not not over-tighten the screws, otherwise you may damage the wires.

Take the bottom of the enclosure and attach the four shorter stand-offs. Tighten them by hand. Place your Raspberry Pi board on top of the four stand-offs using the holes in the Raspberry Pi.

On top of three of the holes, you need to place a washer and the longer stand-offs (the hole in the middle has just a washer and screw). Take a look at the assembled Raspberry Shake (Figure 1) to see which one doesn’t need the large stand-off. Now insert your microSD card. If you bought it from Raspberry Shake, it will be pre-installed with Raspberry Shake software. Otherwise, flash a card with the image file.

Make sure the Raspberry Shake board orientation is correct (the wires to the geophone should be near to the USB ports). If in doubt, take a close look at Figure 1 below. 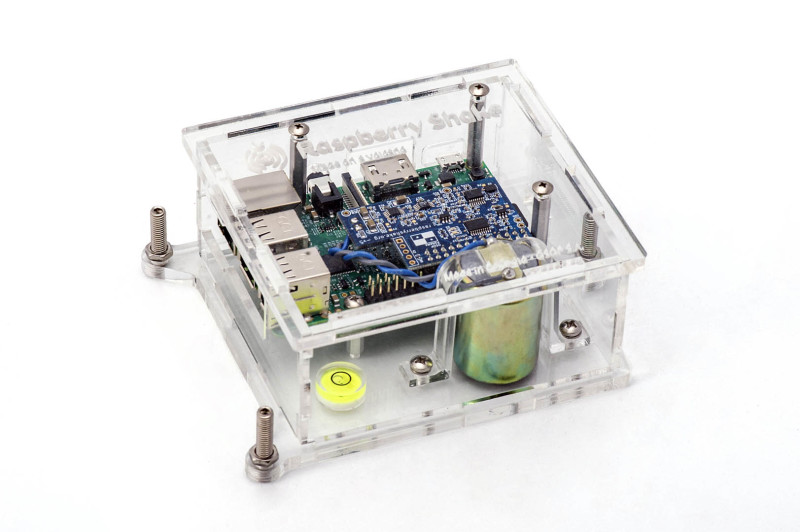 The lid of the enclosure has three holes in it, which will line up with the long stand-offs (from Step 02). Use three screws to hold the lid in place. It’s recommended to ensure the Raspberry Pi Shake is fully enclosed to prevent any wandering of the results.

The device is designed to be left running 24 hours a day, monitoring for earth tremors. So you’ll want to find somewhere out of the way. With the Raspberry Pi 3B included in the kit, you should use an Ethernet connection to the router, to avoid possible wireless LAN interference to the geophone (this is not an issue if using a Raspberry Pi Zero or 3B+).

You’ll need to run an Ethernet wire directly from Raspberry Shake to your router. We used Devolo DLAN Powerline adapters to extend our Ethernet connection across the electrical wiring. We positioned our Raspberry Shake in the conservatory to the rear of our home.

According to the makers of Shake: “For best results, install your Raspberry Shake on a bare floor (no carpet) and not on top of your desk. A good location for the Shake would likely be on the concrete slab of the lowest floor, near a foundation wall and away from furnaces, washing machines, air conditioners, and such.”

With Raspberry Shake in position and connected to your router, use the power adapter to turn on Raspberry Pi. A blue light will appear on top of the Raspberry Shake board. You don’t access Raspberry Pi directly with a keyboard and screen – instead, it is set up for remote connection over your network. Open a web browser from another computer on the network, and go http://rs.local (don’t forget the ‘http://’ part. (Note that ‘rs.local’ replaces the former ‘raspberryshake.local’)). You will see the Raspberry Shake web interface. 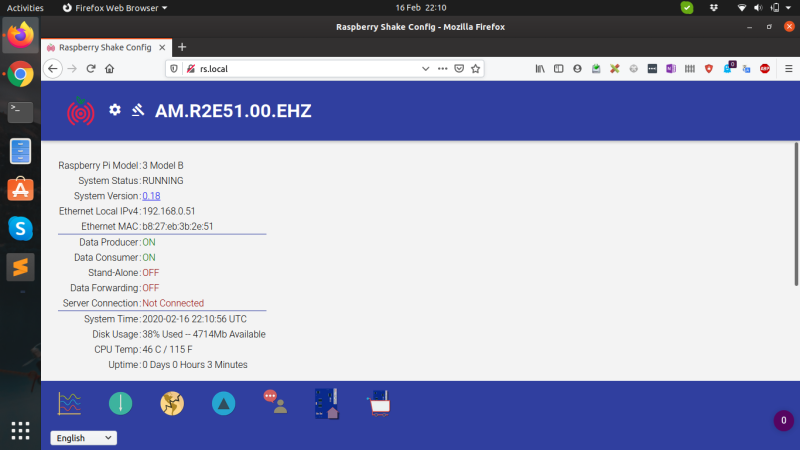 See ‘Ready, Set, Get Hacked!’ on the Raspberry Shake website for more information on security.

With your Raspberry Shake password changed, you can turn on data sharing and join the Raspberry Shake community. This enables you to share your data with the citizen science project.

Click Home and Settings. Fill out your details in the General section and click Set Location. The location data is randomised by a couple of hundred yards to preserve privacy.

Finally, enter the floor that the device is on – this is zero-indexed, so 0 is the ground floor – and how many floors you have in the house.

Now click the Data tab and tick the box marked ‘Forward Data’. Read the licensing information and click Save and Restart. Raspberry Shake will restart (you may be prompted to enter your new SSH password from Step 08). 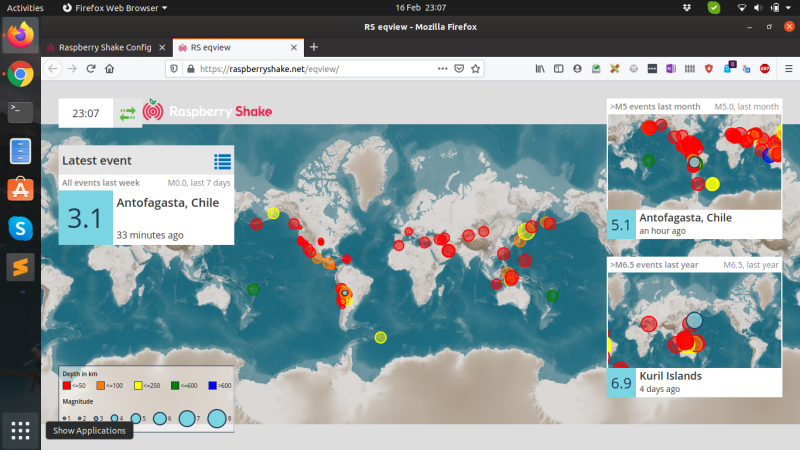 Now that you’re part of the wider Raspberry Shake community, it’s time to take a look at earthquake activity around the world. Click Raspberry Shake Earthquake View to see a global map. The circles indicate earthquake activity. The colour of the circle corresponds to its depth, with red circles showing it’s closer to the Earth’s surface. The size of the circle indicates its severity. Click on any circle to see more information.

If you want to see all the Raspberry Shake devices (including your own), make a note of your station number and click on the Station View icon. Here you will see all the devices running in the world. Click any device to view its data.