The Maker Nano RP2040 (£8/$8) aims to combine the form factor of an Arduino Nano with the impressive power of the RP2040 system-on-chip, as used by Raspberry Pi Pico.

Slightly shorter than a Pico, this board has 30 pre-soldered pins, all helpfully labelled on the silkscreen. While the pinout is very similar to the Arduino Nano’s, there are four (12-bit) analogue inputs rather than eight (10-bit). Some digital GPIO pins are numbered differently too.

A pair of reset pins are linked to a handy reset button on the top, where there’s also a boot button – held to attach the board as a USB drive to a computer – and a programmable button linked to GPIO pin 20.

Other connections include a micro-USB port (for power and connecting a computer) and two Qwiic / STEMMA QT ‘maker ports’ which also work with Grove modules using the two supplied adapter cables. 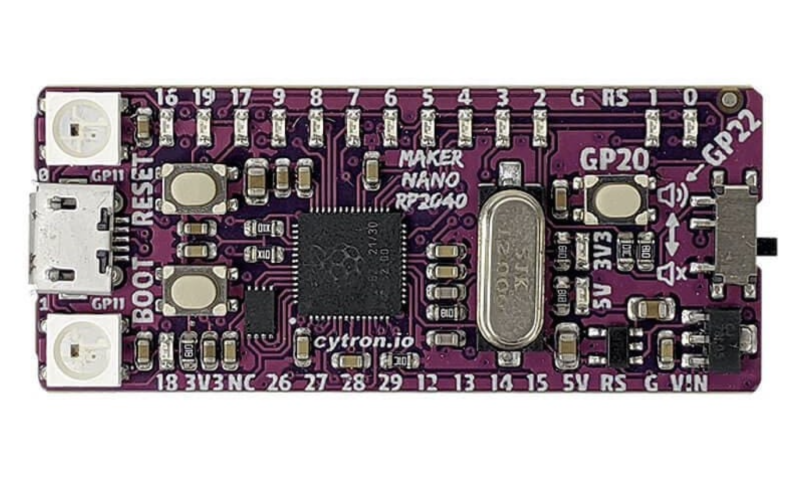 On either side of the micro-USB port are two RGB NeoPixel LEDs. Since both are linked to GPIO 11, they can’t be controlled separately, but some cool colour-changing effects can be achieved. In addition, 14 of the digital pins have tiny blue status LEDs that may well prove useful when troubleshooting I/O connections for circuits.

Primitive audio is also provided in the form of a piezo buzzer that can be muted with a slide switch. It can be programmed to play beepy tunes by sending numerical note values.

Talking of coding, the Maker Nano RP2040 comes with CircuitPython firmware pre-installed, including a mini demo that shows off the lights and sound. More code examples are found in the GitHub repo: magpi.cc/makernanogh. Alternatively, you can flash MicroPython firmware or program in C/C++ (natively or via the Arduino IDE). Like Pico, it’s very flexible.

A well-designed microcontroller board with a familiar Arduino form factor, the power of RP2040, and cool bonus features.