The Sony UK Technology Centre (Sony UK TEC) has announced the production of the 10 million Raspberry Pi boards made in Wales.

Steve Dalton, Sony UK TEC managing director, said, “The last five years have seen unprecedented growth across our Pencoed facility – something we are understandably proud of.”

The Pencoed facility was chosen, a Sony UK TEC spokesperson explained, “due to the facility’s capacity and innovative automated processes.” Based roughly 13 miles west of Cardiff, the Sony UK TEC facility “has seen staff numbers leap by 200, taking its team of local employees to 540” over the last five years. 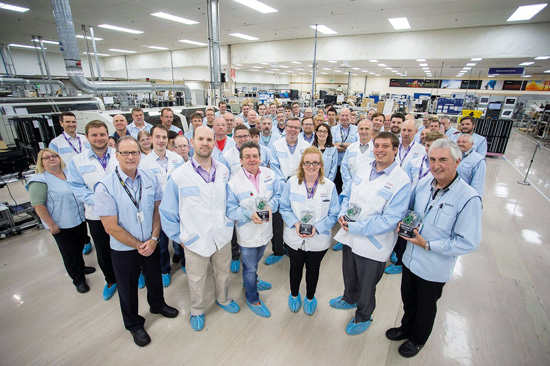 Steve added, “Our growth has been intrinsically linked to the success of the Raspberry Pi. This is a significant achievement for everyone involved in its production, especially our devoted Sony Team, The Raspberry Pi Foundation, and distributors Premier Farnell.”

Raspberry Pi co-founder Eben Upton joined Sony UK TEC to celebrate the milestone, saying “when we initially began manufacturing [Raspberry Pis] here at Sony UK TEC, we could never have imagined it would be the soaring success it has become – and for that we are grateful to Sony and our distribution partners.”

Raspberry Pi boards made in the UK

Eben attributes much of the success of the Raspberry Pi to Sony UK TEC’s “unparalleled manufacturing standards, comprising the latest techniques and the very best engineering talent.”

Steve Dalton added that making Raspberry Pis in such volume “has challenged our highly skilled team of engineers and technicians to develop new processes and drive innovation. We were able to support The Raspberry Pi Foundation further by introducing Pi manufacturing to our counterparts in Japan, and there is now a ‘made in Japan’ version of Pi.”

No Raspberry Pi 4 yet, though

Speaking with Beta News at a separate event, Eben was asked whether we might see a Raspberry Pi Model 4 sometime soon. His response was, “Nope!”

Eben clarified: “I think we gave the impression by launching Pi 2 and Pi 3 a year apart that we were establishing some sort of annual cadence. We’ve said that we think the Raspberry Pi 3 is more of a three-year platform.”

Even that is a very soft timeline, though, as Eben added, “we’re not much more than a year into that (very rough) window yet.”